(Minghui.org) According to information compiled by Minghui.org, the month of May 2019 recorded 60 new cases of Falun Gong practitioners sentenced to prison by the Chinese Communist Party's (CCP) court system.

The practitioners were sentenced for raising awareness of the persecution of Falun Gong, including sending information to people's cell phones. Some were arrested while reading Falun Gong books at home. A business owner from Guangdong was arrested and sentenced after Falun Gong-related information was discovered in his company’s WeChat account.

These sentenced practitioners come from 13 provinces and municipalities in China, with the provinces of Shandong (12) and Heilongjiang (10) registering the most sentences. The prison terms range from six months to ten years, with an average of 3.33 years. 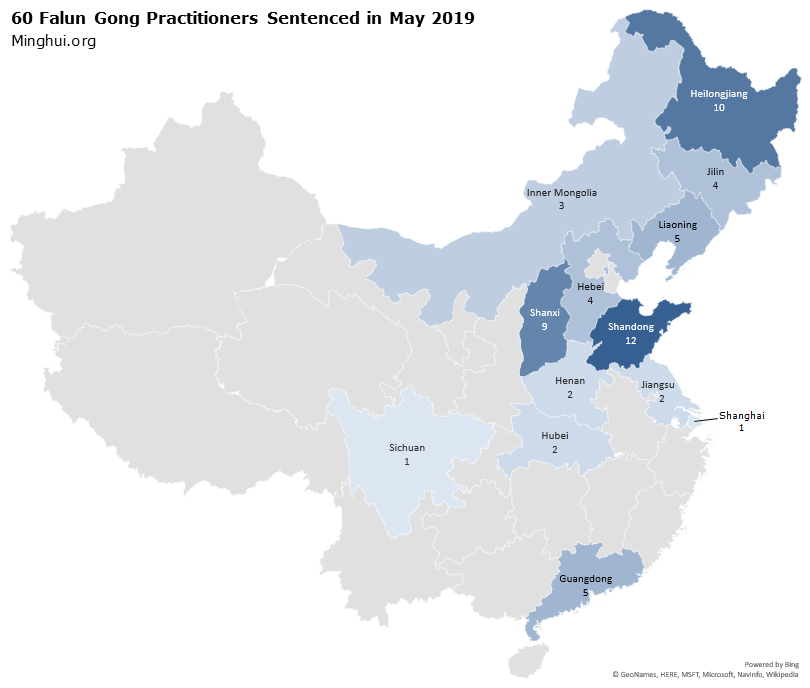 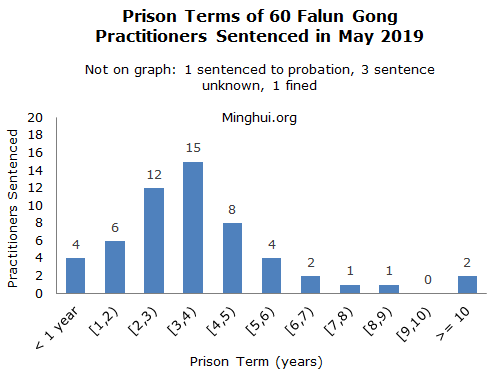 Among the 60 cases, 29 practitioners faced extortion by the police or were fined by the court for a total sum of 287,000 yuan, with an average of 9,897 yuan per person.

Six of the practitioners are aged 65 or older. Their sentence terms range from one to ten years, with Ms. Wang Suping (67) sentenced to 10 years and fined 30,000 yuan.

Eight Falun Gong practitioners from Taiyuan City, Shanxi Province, were recently sentenced for refusing to renounce their faith in Falun Gong, after their court hearing on April 2, 2019. All the practitioners were fined, and their prison terms range from one to ten years.

The practitioners' names, ages, prison terms, and fines are as follows:

The practitioners were arrested on June 25, 2018. Five of them–Ms. Sun, Ms. Tian, Ms. Hu, Mr. Luo, and Ms. Guo–were arrested together when they were studying Falun Gong books at Ms. Sun's home.

Three other practitioners, Ms. Zhang Qingxiang, Ms. Zhang Runying (no relation), and Ms. Wang Suping were arrested at around 9:00 p.m. that evening.

Five Falun Gong practitioners in Gaomi City, Shandong Province, were sentenced to prison and fined after being held in custody for over a year after their arrest in 2018.

Ms. Jiang Haiying was given a four-year prison term and fined 10,000 yuan. She was taken to Jinan Women's Prison.

Mr. Rong Chuncheng was given a four-year prison term and fined 10,000 yuan.

Ms. Dai Chuanhua was given a three-year prison term with three years of probation and fined 10,000 yuan.

Mr. Rong and Mr. Gao were most likely taken to Jinan Prison.

Another two practitioners, Ms. Yang Xiaohua and Ms. Qi Naihua, from Weifang City, Shandong Province, were sentenced to four years and three years’ imprisonment, respectively. Their family received the verdict from the court on May 10, 2019.

The two practitioners were targeted as part of a mass arrest that was carried out between April and May 2019, ahead of the Shanghai Cooperation Organization (SCO) summit that was later held in Qingdao City, Shandong Province, June 9-10, 2018.

On May 24, 2019, seven residents of Suihua City, Heilongjiang Province, were sentenced to prison for not renouncing their faith in Falun Gong. All of them have appealed their verdicts.

Mr. Yang Chuanhou, Ms. Wang Fang, Ms. Wang Fuhua, Ms. Bai Xia and Ms. Zhao Tingting were sentenced to two years in prison. Ms. Song Hongwei received one and a half years. Ms. Gao Jinshu, who has had severe high blood pressure since her arrest last October, was given one year in prison. Each was also fined 5,000 yuan.

The seven practitioners first appeared in the Anda City Court on April 16, 2019. The hearing was halted minutes after it started when Ms. Gao became incoherent and started vomiting due to high blood pressure.

Even though the court had agreed to grant Ms. Gao's release on bail for medical treatment after the first hearing in April, the director of the local Political and Legal Affairs Committee (PLAC) blocked it.

The PLAC is a non-judicial agency tasked with the persecution of Falun Gong and given the power to override the judicial system.

The second hearing was held on May 14 and lasted from 9:10 a.m. to 8 p.m. Six lawyers entered a not-guilty plea for the seven practitioners. They argued that the persecution of Falun Gong has no legal basis. The lawyers also emphasized that practitioners living by Falun Gong's principles of Truthfulness, Compassion, Forbearance only benefit society without causing harm to anyone.

Five Jieyang City, Guangdong Province, residents were sentenced to prison in mid-May 2019 for spreading information about the persecution of Falun Gong.

On May 22, 2017, Mr. Wu Chunxiong, the owner of a small company in Jiexi County, Jieyang City, was arrested when police started monitoring him after discovering Falun Gong-related information on his company’s WeChat account. Three employees, Mr. Wu Xuqin (no relation to Mr. Wu Chunxiong), Mr. Tang Jianqun and Ms. Cai Linhua, who are also practitioners, were arrested on the same day.

When police took Mr. Wu Xuqiu to his home and ransack his residence, they also arrested his mother, Ms. Chen Xiaobin, a Falun Gong practitioner. His father, Mr. Wu Meiping, avoided arrest as he wasn't home during the police raid. The elder Mr. Wu was then put on the wanted list at the local 610 Office, an extralegal agency created specifically to persecute Falun Gong. He was arrested on March 15, 2019 when he went to apply for permission to attend the hearing of his son and wife. He is currently being held at the Jieyang City Detention Center.

In addition to Mr. Wu Xuqin's family, the police also interrogated other employees and questioned the person who referred them to the company and that person’s family members. The police subsequently arrested some of the professional references, including some former employees of the company.

Mr. Wu Chunxiong was forced to shut down his business operation, and many of his personal belongings were confiscated.

The five practitioners were sentenced to prison a few months after being indicted by Rongcheng District Procuratorate on January 29, 2019 and tried by Rongcheng District Court on March 19, 2019. Mr. Tang was sentenced to 8 years, Mr. Wu Xuqin received 7.5 years, Ms. Chen and Ms. Cai each received 2.5 years. The prison term for Mr. Wu Chunxiong remains to be investigated.

Emaciated Man Imprisoned for Not Renouncing His Faith

Mr. Ke Changyan, a resident of Huangshi City, Hubei Province, was recently sentenced to four years in prison for not renouncing his faith in Falun Gong. He was first tried on November 15, 2018.

Mr. Ke’s family was allowed to see him for the first time on May 28, 2019, the day before he was transferred from Xiongjiabian Detention Center to Shayang Prison. They were devastated to see him reduced to just skin and bones after nearly 16 months of detention since his arrest on January 16, 2018.

This is not the first time that Mr. Ke has been persecuted for his faith. Prior to his latest prison sentence, he had been repeatedly arrested and served two terms of forced labor for a total of four years. He was subjected to various forms of torture and force-fed unknown drugs, after which he suffered from frequent dizziness, memory loss, and mental disorder.

A woman from Inner Mongolia was recently sentenced to three years in prison shortly after her trial in early May 2019.

Ms. Duan Xueqin, in her 70s, was arrested while distributing information about Falun Gong on December 6, 2018, 11 months after her last release from prison. The police then ransacked her home and confiscated her notebook computer and Falun Gong books. Three weeks later, the Bairin Right Banner Procuratorate indicted her.

Since her arrest, Ms. Duan has been detained and tortured, including with electric shocks, in the Bairin Right Banner Detention Center, and become very weak as a result.

Prior to her latest prison sentence, Ms. Duan had been detained and tortured repeatedly since the persecution of Falun Gong started in July 1999.

Falun Gong practitioner Ms. Shao Changhua of Dandong City, Liaoning Province, was sentenced to three and a half years of imprisonment on May 30, 2019, for refusing to renounce her faith. She has appealed the verdict.

On August 17, 2018, Ms. Shao was arrested when she was seeing her friend out of her house. Her relatives were told after inquiring with the police that Ms. Shao was arrested for hanging Falun Gong-related banners a year ago with two other practitioners and that she would be released after seven days.

However, her family learned on the fifth day that she was put in criminal detention and taken to Dandong Detention Center.

Ms. Shao had become very weak a month later on September 19, 2018 when her lawyer visited her. Her family requested for her to be released but was told that the case had been submitted to the procuratorate. She was eventually indicted and appeared in court on April 11, 2019, after the case was returned twice to the procuratorate due to insufficient evidence. The first trial lasted an hour and a half.

On May 19, 2019, a second trial was held secretly by the Zhen'an People's Court. After the trial, Ms. Shao's daughter went to the court and requested her release, telling the judge that Ms. Shao had not violated any laws. However, the judge told the daughter that if he releases Ms. Shao, he would be imprisoned in her place instead, adding that the detention was due to Ms. Shao's refusal to renounce her faith.

A 55-year-old resident of Guangzhou City, Guangdong Province, was sentenced on May 31, 2019, to three and a half years in prison and fined 5,000 yuan for raising awareness of the persecution of Falun Gong.

Mr. Yan Rongjie was arrested on July 23, 2018, after being reported for sending information about Falun Gong to people's cell phones. The police ransacked his home that evening. Their violence and brutality terrified Mr. Yan's father, who is in his 80s. He refused to eat after the raid and suffered a heart attack one month later.

After seven months of detention and the procuratorate returning his case to the police once for insufficient evidence, Mr. Yan appeared in Liwan District Court on February 22, 2019, where his lawyer entered a not-guilty plea for him. His lawyer argued that no law criminalizes Falun Gong and emphasized that the information his client distributed was to expose the persecution of his faith, which didn't cause harm to anyone.

On May 20, 2019, Falun Gong practitioner Ms. Chen Jie of Chengdu City, Sichuan Province, was sentenced to four years in prison for raising awareness of the persecution of Falun Gong. She was also fined 5,000 yuan.

Ms. Chen, 57, was distributing informational materials on May 16, 2018 when she came across a plainclothes officer, who arrested her upon taking a booklet from her. The police proceeded to ransack her home and confiscate her computer, several memory cards, and many Falun Gong-related materials.

She was put in criminal detention eight days later and had her case submitted to Qingbaijiang District Procuratorate on the 12th day of her arrest.

Prior to her latest prison sentence, Ms. Chen had been imprisoned twice for a total of eight years for not renouncing her faith. Shortly after she was released from her second imprisonment in 2012, her husband divorced her as he couldn't bear the pressure from the persecution any longer.

“Shen Yun Brought Me Back to Cultivation”