(Minghui.org) Ms. Shao Changhua was twice incarcerated in Liaoning Women's Prison, both times for telling people about Falun Gong (also known as Falun Dafa), a spiritual practice persecuted by the Chinese Communist regime for the past 17 years.

Ms. Shao was first sentenced to 5 years in prison in 2005, following her arrest in October 2004. Guards and inmates brutally tortured her in an attempt to force her to renounce her belief.

For example, Ms. Shao was once deprived of sleep for over 20 days. She was beaten and shocked with electric batons on almost a daily basis, and she was not allowed to wash her face or brush her teeth for over two months.

Ms. Shao was again arrested on September 6, 2010, and sentenced to 4 years in prison.

The following is Ms. Shao's personal account of her second incarceration.

I was taken to Liaoning Women's Prison for the second time in April 2011. The guards promised two inmates, “It doesn't matter what you do to her. If you can get Shao Changhua to renounce her belief in Falun Gong, your sentences will be reduced by six months.” As result, those inmates tortured me in all kinds of ways for the next eight months.

They slapped my face and kicked me until they were tired. They then found a 3-foot-long piece of plastic tubing and made a whip with four metal wires. They whipped me from 6:30 am until 7:30 pm. At night, I was forced to stand on a chair. Whenever I moved my legs, they would whip me again and not let me sleep.

On the seventh night, I had a heart attack and passed out. When I came to, they continued to beat me until daylight.

I was covered with bruises. They also repeatedly jammed sewing needles into my fingertips. 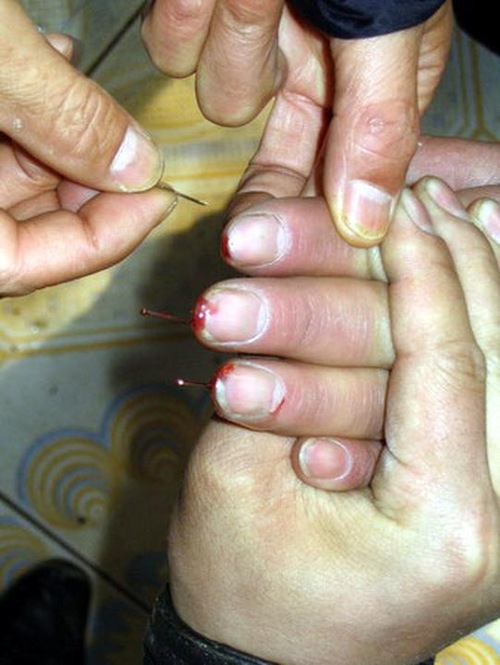 They also put hot pepper oil and seeds in my eyes and my vagina, put clamps on my ears, nipples and genitals, and pushed my head into a toilet or sink full of water, almost drowning me.

I was doused with buckets of cold water for hours. I shivered uncontrollably and couldn't even speak. They didn't let me change clothes. Eventually, my body heat dried the clothes.

Sometimes I was not given anything to eat or drink. I often was not allowed to use the toilet. One day, an inmate suddenly grabbed my neck and started to choke me. I was later tied to a bed frame with my arms and legs stretched out and my feet barely touching the ground.

After eight months of intense torture, my weight dropped from 120 to less than 70 pounds. All my hair turned white. I had many broken bones. My spine was injured so severely that I couldn’t stand up straight. I had difficulty walking. My eyesight and hearing were also affected.

The Persecution of Shao Changhua and Zhang Guilan from Dandong City, Liaoning Province