(Minghui.org) Mr. Geng Dong, a Falun Gong practitioner in Tianjin City, is serving four years in Binhai Prison for his belief. His mother-in-law, Ms. Zhao Yuqin, who lives in New York, has been appealing for his release outside the Chinese Consulate every day in recent days.

Mr. Geng is currently held in the intensified unit of the First Division, where he was forced to sit on a “small stool” motionlessly for a long time. Three inmates who were assigned to watch him often gave him severe beatings. 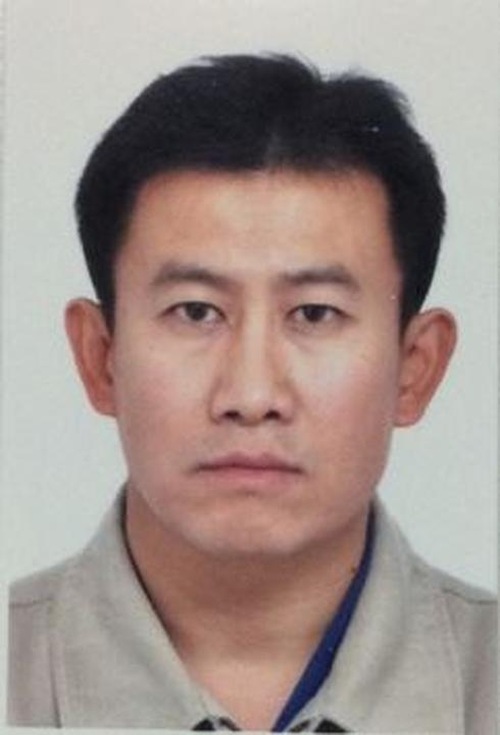 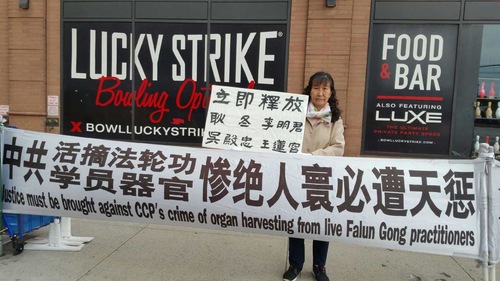 Falun Gong, also known as a Falun Dafa, is a meditation system that consists of gentle exercises and the principles of Truthfulness-Compassion-Forbearance. Since the Chinese Communist Party (CCP) began to persecute the group in July 1999, a large number of practitioners have been arrested, detained, and tortured.

Mr. Geng used to work at a foreign firm in Tianjin. After the persecution of Falun Gong began, he was forced to resign and moved to other provinces to avoid persecution. The police later arrested him on more than one occasion. He was taken to a labor camp for two years in 2000, followed by a three-year labor camp term in 2003.

He was most recently arrested on December 7, 2016 and sentenced to four years in prison shortly after his court hearing on June 22, 2018. His appeal was rejected four months later, and he was soon taken to Binhai Prison.

Mr. Geng's family is extremely concerned about his well-being, citing Binhai Prison’s notoriety for torturing Falun Gong practitioners to force them to renounce their belief. 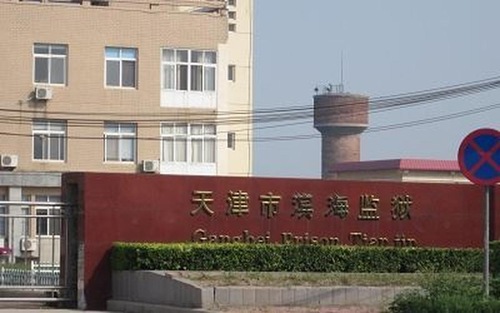 Guards often tie practitioners up tightly with multiple ropes or cuff their hands behind their backs. This leads to severe injury and occasionally disability.

Other torture methods include chaining the victim’s ankles and wrists together to a floor anchor, dragging practitioners up and down stairs, hanging them up high, and beating them. Furthermore, guards sometimes put insects in practitioners’ ears, spit sputum in their food, rub feces in their mouths, and so on. 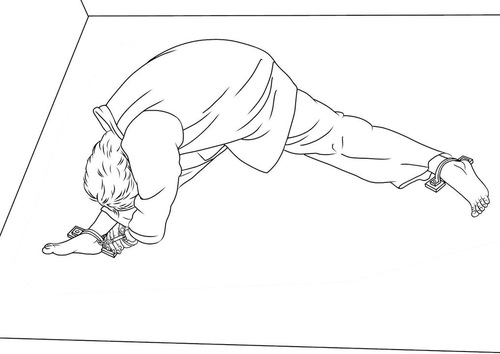 Torture illustration: Immobilizing both ankles while cuffing both wrists to one ankle

This form of torture also involves the use of floor anchors. A metal cylinder, open at both ends, and a metal ring are both bolted to the ground. The victim is first made to stand inside the cylinder, which is sized such that the lower body–from the hips down–is tightly secured, and there is no room for the legs to move. Next, the victim is forced to bend down to be handcuffed to the metal ring on the ground. To avoid causing severe injuries, guards usually release the victim after two hours at most.

Mr. Li Xiwang, another Tianjin practitioner, however, was tortured in this way for more than ten hours. By the time guards finally checked on him at 12:00 a.m. on July 29, 2011, he had already died. He was 49.

Practitioners are forced to wear 24-kilogram (53-pound) foot chains and then dragged on the stairs from the first floor to the fourth floor and then back down. This often causes bruises and bleeding. Guard Yang Bo said that for practitioners who refused to renounce their belief, one person would stand on the foot chain during the torture to intensify the pain.

Mr. Geng Dong Arrested and Taken Away While His Family Members Need His Care and Support