(Minghui.org) According to information compiled by Minghui.org, the month of October 2019 recorded 39 new cases of Falun Gong practitioners sentenced to prison by the Chinese Communist Party's (CCP) court system.

The practitioners were sentenced for raising awareness of the persecution of Falun Gong, including telling people about Falun Gong and distributing calendars and brochures with information about Falun Gong.

These sentenced practitioners come from 14 provinces and municipalities in China, with the province of Liaoning registering the most sentences (6). The prison terms ranged from 1 to 11 years, with an average of 3.32 years. 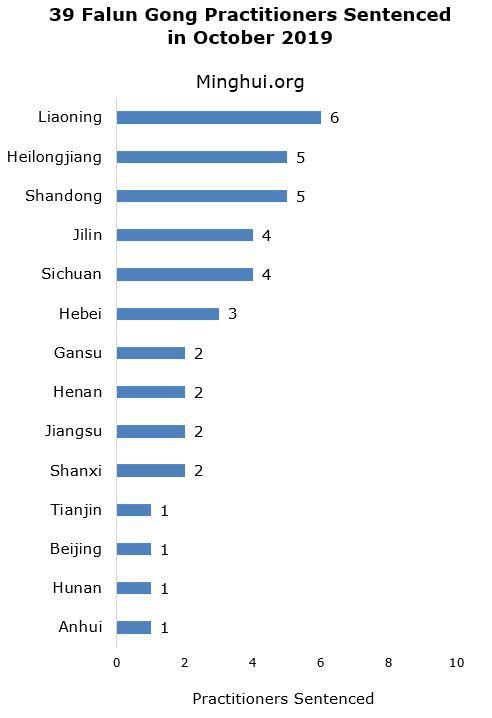 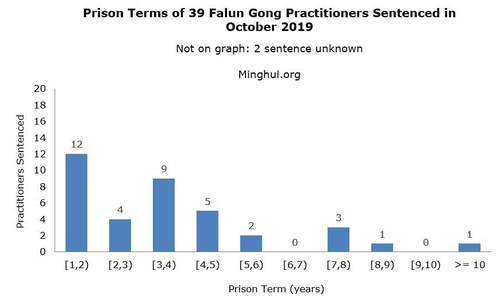 Some of the practitioners sentenced in October 2019 have been repeatedly persecuted for their faith over the past 20 years. Some of their elderly parents or other family members were also implicated.

Among the 39 cases, 11 practitioners had money extorted from them by the police or were fined by the court for a total of 68,000 yuan, with an average of 6,182 yuan per person.

Six of the practitioners are aged 65 or older. Their sentence terms ranged from 1.5 to 7 years, with Mr. Peng Songwei, 71, sentenced to 7 years.

The following is a snapshot of some of the sentenced practitioners.

Dentist Disabled Due to Beatings, Sentenced to 11 Years in Prison

Mr. Li Yongquan, a dentist is Tianjin, was sentenced to 11 years in prison around October 2019.

Mr. Li was arrested at work on December 28, 2017. He was beaten after being taken to Shangmatai Police Station and became disabled as a result.

Mr. Yuan was arrested on January 24, 2019, for seeking the release of his sister, Ms. Yuan Xuefen, who was arrested on May 21, 2018, for removing propaganda posters attacking Falun Gong.

Prior to his latest sentencing, Mr. Yuan has been repeatedly arrested and incarcerated for not giving up his faith. He served one year in a forced labor camp and eight years in prison. He lost his job as a teacher. His wife also divorced him.

Another practitioner, Ms. Ding Shuqing, who was arrested on October 25, 2018, after being reported for using banknotes with printed information about Falun Gong, appeared in court with Mr. Yuan. She was sentenced to three years in prison and fined 10,000 yuan.

Mr. Dai Qihong, a former prison guard in Mudanjiang City, Heilongjiang Province, was sentenced to five years in prison around October 2019. He is serving time at Mudanjiang Prison.

Mr. Dai went missing during a police sweep of Falun Gong practitioners on June 25, 2019. It was confirmed in July that he had been arrested and detained in the Mudanjiang City No.1 Detention Center.

The local court said his latest arrest was triggered by an earlier arrest in 2017.

Mr. Dai was arrested on August 31, 2017, for seeking the release of a detained practitioner. The police confiscated 18,000 yuan cash from him. He went on a hunger strike to protest the arbitrary detention and was twice hospitalized. He was released on bail on March 6, 2018.

On April 8, 2018, the police ordered him to go to the local police station but he refused to go.

They then told him to go to the Aimin District Procuratorate so that the prosecutor would return the confiscated cash to him.

Mr. Dai went to the procuratorate on April 9, only to be taken to the police station and then to the Aimin District Court. The judge sentenced him to an unknown length of time and ordered the police to take him to prison.

Both the prison and detention center refused to accept him after he failed the physical examination. He was released on bail again, before being re-arrested and admitted to the prison one year later.

Prior to his latest prison term, Mr. Dai, a former guard at Mudanjiang Prison, was arrested on March 20, 2008, and sentenced to five years. He endured savage beatings, force-feedings, and being hung up by the wrists and shocked with electric batons. The guards also deprived him of sleep and forced him to sit on a small stool for long hours. He had injuries all over and was emaciated.

His wife divorced him and he was fired from his job while he was incarcerated. He was destitute after his release.

Ms. Li Gang, 76, of Dalian City, Liaoning Province, was sent to Liaoning Women's Prison on October 22, 2019, after being sentenced to 3.5 years in prison for her faith in Falun Gong.

Mr. Nie Pengge, 51, a native of Huainan City, Anhui Province, was arrested in April 2019 when working in Zhejiang Province. He was taken back to Huainan and detained at Huainan City Detention Center.

His family was informed by the authorities to visit him on October 30, 2019. Only then did they learn that Mr. Nie has been secretly sentenced to four years in prison without a court hearing. He has been taken to Suzhou Prison.

Ms. Feng Junqing of Hegang City, Heilongjiang Province, was recently sentenced to four years in prison and fined 4,000 yuan for practicing Falun Gong. She has appealed her verdict with the Hegang City Intermediate Court.

It remains to be investigated when Ms. Feng was tried and when the judge announced the verdict.

Ms. Feng and her husband, Mr. Peng Yanfeng, were arrested at home on February 14, 2019. The police restrained Ms. Feng in an interrogation chair and Mr. Peng in a metal cage with his hands cuffed overnight.

The couple was held in custody for 42 days and released only after the police extorted 20,000 yuan from their family.

Ms. Feng was later indicted by the Xing’an District Procuratorate and taken back into custody. She has been held in the Hegang City Detention Center ever since. The timing of her second arrest remains to be investigated.

Another practitioner Ms. Li Chunhui, 44, was arrested on April 25, 2019, when she went with Mr. Peng to request Ms. Feng's release and urge the police not to participate in the persecution of Falun Gong.

Mr. Peng was released 15 days later, but Ms. Li remained in the Hegang City Detention Center. The guards there claimed that Ms. Li was a key coordinator in the Falun Gong group and denied her father's requests to visit her three times. The father is not only concerned about his daughter's wellbeing but also worries about how her two boys, ages 12 and 9, are going to cope with their mother's imprisonment.

It was reported that Ms. Li has also been sentenced to four years in prison and has appealed the verdict. However, the date that Ms. Li's verdict was announced remained unknown at the time of writing.

Two Jilin Women Sentenced to Prison for Their Faith, Family Threatened by Police

Two residents of Liaoyuan City, Jilin Province were sentenced to prison on October 17, 2019, for talking to people about Falun Gong.

The two women were arrested on June 5, 2019. The police confiscated their Falun Gong books and other belongings. Both have been held at Xiangyang Detention Center since.

Ms. Sun’s brother-in-law, who happened to be at her home during the police raid, was slapped in the face by one officer and held at the police station for more than an hour.

The police also threatened to force Ms. Sun’s son, a college student, out of school, if she didn’t give up her faith.

Ms. Sun is an only child. Her father just passed away last year, and her sentencing dealt another blow to her mother, who recently became ill and struggles to care for herself.

Ms. Huang Keqin, a 55-year-old resident of Fushun City, Liaoning Province, was sentenced to one year in prison and fined 4,000 yuan for hanging up a banner that said, “Falun Dafa is good.”

Ms. Huang was arrested on April 25, 2019, and indicted by the Dongzhou Procuratorate on August 9.

Her family went to the local police station and procuratorate to seek justice for her but to no avail.

Ms. Huang was tried by Dongzhou District Court in a makeshift courtroom at Nangou Detention Center on September 4, 2019. Her lawyer entered a not guilty plea for her. She also testified in her own defense.

Woman, 63, Sentenced to 7 Years in Prison

Ms. Zheng Quanhua’s family was informed by Jimo Court in late October 2019 that she was sentenced to seven years in prison.

Ms. Zheng, 63, of Qingdao City, Shandong Province, was arrested on July 17, 2018. She has since been held in the Pudong Detention Center and denied family visits.

Ms. Zheng’s grandson was so traumatized by the arrests of his grandmother and mother that he became mute.

Mr. Yu recently suffered a stroke because of the repeated arrests and harassment he has had to face in the past 20 years. He remains hospitalized at the time of writing.

A single mother in Qingdao City, Shandong Province, was sentenced to a three-year prison term for talking to people about Falun Gong.

Ms. Sui Ying's ten-year-old son was deeply traumatized by her imprisonment and struggled to cope.

The Huangdao District Court issued a summons on May 29, 2019, ordering her to go to the courthouse to sign a document about her case. After she refused to show up, the judge ordered the police to take her back into custody at the Pudong Detention Center.

The Minghui website recently confirmed that she was sentenced to a three-year prison term. The timing of her sentencing is still being investigated.

This is not the first time that Ms. Sui was arrested.

On October 1, 2000, Ms. Sui was arrested and detained for a month in the Dashan Detention Center when she went to Beijing to appeal for Falun Gong. She was tortured and forced to do unpaid labor.

She returned to Beijing in 2000 and was arrested for doing the Falun Gong exercises at Tiananmen Square. She was later sentenced to two years in the Shandong Province No. 2 Women’s Prison.

The authorities transferred her to a local brainwashing center for further persecution at the end of her term and demanded that her parents pay for her living expenses and tuition there.

Ms. Jia Baoling, 53, and Ms. Yang Erbian, 62, both retired from a chemical plant in Yangquan City, Shanxi Province, were arrested on March 12, 2019, for distributing informational materials about Falun Gong. The police confiscated their Falun Gong books and many other personal belongings before taking them to Yangquan City Detention Center.

Ms. Jia’s father-in-law was in tremendous mental distress following her arrest. He lost his appetite and his health quickly deteriorated. He passed away soon after, at the age of 86.

It was recently confirmed by Minghui.org that Ms. Jia has been sentenced to 2.5 years and Ms. Yang to 1.5 years by Pingding County Court.