(Minghui.org) According to information compiled by Minghui.org, the month of July 2019 recorded 52 new cases of Falun Gong practitioners sentenced to prison by the Chinese Communist Party's (CCP) court system.

Falun Gong, also known as Falun Dafa, is a spiritual practice based on the principles of Truthfulness, Compassion, and Forbearance. Since the CCP started persecuting the practice in July 1999, many practitioners have been subjected to arrest and detention, imprisonment, torture, forced labor, and even organ harvesting.

The 52 practitioners were sentenced for raising awareness of the persecution of Falun Gong, including telling people about Falun Gong, writing letters to the authorities about the practice, and posting Falun Gong-related information on popular Chinese social media platforms.

These sentenced practitioners come from 16 provinces and centrally-controlled municipalities in China, with the provinces of Shandong (10) and Heilongjiang (9) registering the most sentences. The prison terms range from four months to seven and a half years, with an average of 2.68 years. 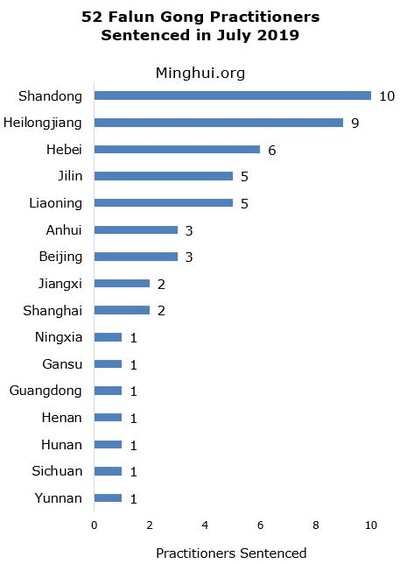 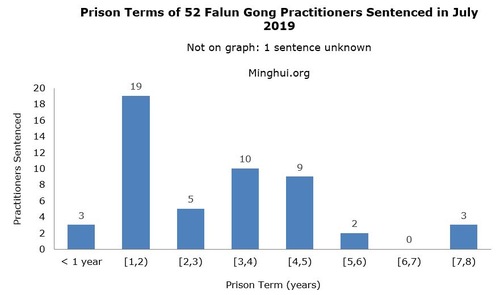 Among the 52 cases, 21 practitioners had money extorted from them by the police or were fined by the court, totally 174,000 yuan, with an average of 8,286 yuan per person.

Eight of the practitioners are 65 or older. Their sentences range from 20 months to seven years.

The following are snapshots of some of those who were sentenced.

A resident of Pengzhou City, Sichuan Province, was sentenced to four years in prison on July 9, 2019, for refusing to renounce his faith in Falun Gong. The sentence came after nearly two years of detention.

Mr. Deng Chuanjiu, 49, was arrested at work on October 8, 2017. The police later went to ransack his home and beat his wife when she attempted to stop them.

The trial was attended by only Mr. Deng's wife and son, as other family members were not allowed to enter the courtroom. During the trial, Mr. Deng's lawyer entered a not guilty plea for him and argued that no law in China criminalizes Falun Gong. Mr. Deng also testified in his own defense.

After the trial ended, Mr. Deng's lawyer was stopped by several thugs when he left the courtroom. They verbally abused him and were about to hit him when the car picking up the lawyer arrived and he left.

A high school teacher in Haicheng City, Liaoning Province, was notified on July 23, 2019, that he has been sentenced to three and a half years in prison and fined 5,000 yuan. He appealed the verdict on August 1 and also submitted a request demanding an acquittal and the return of his personal belongings that were confiscated by the police.

Mr. Wang Hongzhu, 43, was a victim of the mass arrest that took place on August 22 and 23, 2018. It was reported that the police arrested him in order to meet the quota for a campaign to crack down on gang members. Instead of arresting real gang members, the authorities targeted Falun Gong practitioners. 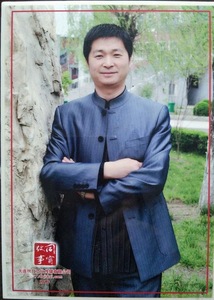 Mr. Wang was tried in the Lishan District Court on May 20, 2019. Two lawyers entered a not guilty plea for him, arguing that no law in China has ever criminalized Falun Gong and that the Constitution grants Chinese citizens the right to freedom of religion and belief. The lawyers also pointed out that Mr. Wang did not violate any law or cause harm to anyone by spreading information about Falun Gong and raising awareness about the persecution. None of the Falun Gong-related materials confiscated from his home, they argued, should be used against him.

Mr. Wang also testified in his own defense and rebutted the charge of “undermining law enforcement,” which is a pretext used by the authorities to detain and imprison Falun Gong practitioners. “This is not a criminal case. It's political persecution,” he said.

Prior to his latest arrest, Mr. Wang was previously sent to a forced labor camp on October 18, 2001, for two years and sacked from his job for telling people about Falun Gong.

A married couple from Tai'an City, Shandong Province, were notified on July 24, 2019, a month after their trial, that they had been sentenced and fined.

Mr. Zhao and Ms. Zheng, both former employees of Shandong Energy Xinwen Mining Group Co., were arrested at home on October 25, 2018, by agents from Jieshan Police Station and Tianping Police Station. The police ransacked their home and confiscated many personal items, including Falun Gong books and materials, a computer, a notebook, a cell phone, and two purses.

Due to health issues, Ms. Zheng is currently released on bail while Mr. Zhao is serving his term in Dongping County Detention Center.

Related report:Shandong Couple Facing Trial for Not Renouncing Their Faith

Anhui Man Who Once Served 14.5 Years in Prison Jailed a Third Time for His Faith

A 64-year-old Hefei City, Anhui Province, man was recently sentenced to three years and four months in prison for not renouncing his faith in Falun Gong. This is the third time he was sentenced, after having served two earlier terms for a total of 14.5 years.

Mr. Zhang Xinhong was arrested on May 8, 2018, after being reported for talking to someone about Falun Gong. He appeared in the Shushan District Court on May 30, 2019. Two lawyers entered a not guilty plea on his behalf.

Prior to the latest sentence, Mr. Zhang was given ten years in prison in late 2001. His second sentence of four and a half years happened in February 2011, nearly a year after he was arrested from his home in May 2010.

Harbin Woman Sentenced to Four Years in Prison, Forced to Leave Husband with Dementia on His Own

Ms. Du Guiying, a 67-year-old resident of Harbin City, Heilongjiang Province, was recently sentenced to four years in prison for distributing Falun Gong materials to people, leaving her husband, who suffers from dementia, alone at home.

This is not the first time that Ms. Du has been sentenced.

In 2004, Ms. Du and her husband Mr. Wang Dejin were secretly sentenced, without the presence of family members or lawyers, to four years in prison for not renouncing their faith in Falun Gong. Due to the torture in prison, Mr. Wang developed mental disorders and dementia and became unable to care for himself.

The couple had their home ransacked in July 2015 and were taken to the police for questioning. They were once again harassed by the police at the end of 2016.

Dalian Engineer Secretly Sentenced to 1.5 Years for His Faith

A 33-year-old software engineer was notified on July 8, 2019, that he has been sentenced to one and a half years in prison and fined 3,000 yuan for spreading information about Falun Gong on popular Chinese social media platforms, including WeChat and QQ. He has appealed the sentence.

Mr. Liu Xiaoxiong of Dalian City, Liaoning Province, was arrested on July 25, 2018, after being deceived by the police into going to their office to apply for a temporary residence permit. He was secretly tried on Monday, May 20, 2019, by judge Jin Hua of the Ganjingzi District Court, who took over the case from a previously assigned judge on Friday, May 17, 2019. Jin had made no mention of the court date when Mr. Liu's family met with her that Friday.

Mr. Liu's family filed a complaint against judge Jin after learning of the secret hearing and demanded that the court investigate her failure to inform them and their lawyer of the hearing. The family never heard back from the court.

A Dezhou City, Shandong Province woman was secretly sentenced to one year in prison for seeking justice for a fellow Falun Gong practitioner who had been incarcerated for not renouncing his faith.

Ms. Jiang Yuqin, in her 50s, was arrested on December 25, 2018, when she accompanied the wife of Falun Gong practitioner Mr. Jia Zhaomin to Qihe County Police Department to inquire about his case.

The police took Ms. Jiang into the detention center without informing her family of her trial. Her family only learned recently that Ms. Jiang had been secretly sentenced by the Qihe County Court and was admitted to prison on July 11, 2019. They were not told the name or location of the prison.

Mr. Gai Guangsheng, 70, of Laiyang City, Shandong Province, was secretly sentenced to 15 months in prison after being denied family visits for the past eight months since his arrest in 2018 for not renouncing his faith in Falun Gong. He has appealed the verdict.

Mr. Gai was arrested at his flower shop on December 21, 2018, and the police later ransacked his home and confiscated his Falun Gong books and materials. They also tore down all the Falun Gong pictures that Mr. Gai had put up.

When Mr. Gai's family tried to visit him at the detention center, they were turned away. The guard also refused to accept the winter clothes and bedding that the family had brought for him.

The family later learned from sources that Mr. Gai was scheduled to appear in court. However, they were ignored and threatened when they asked the presiding judge and chief of Jiangtuan Police Station about the hearing.

A resident of Kunming City, Yunnan Province, was sentenced to five years in prison and fined 10,000 yuan in early July 2019 for not renouncing his faith in Falun Gong.

Mr. Li Wenbo was arrested on May 17, 2018, for writing two letters to the authorities. The first letter requested the removal of propaganda posters displayed in his neighborhood that defamed Falun Gong. The second letter demanded that the farmers’ association in his village return a 10,000-yuan fine it had levied against him for practicing Falun Gong.

Prosecutor Kuan Judan of the Xishan District Procuratorate alleged that Mr. Li's two letters to the authorities contained illegal content and indicted him in April 2019 with the charge of “undermining law enforcement with a cult organization,” a standard pretext used by the Chinese communist regime to frame and imprison Falun Gong practitioners.

Mr. Li appeared in the Xishan District Court on May 23, 2019, and was sentenced in mid-July. The verdict made no mention of the content of the letters and only included a detailed list of all the officials and government agencies to whom the letters were delivered. He has appealed the sentence and included copies of the two letters to Kunming City Intermediate Court. He urged the higher court to read the letters, which contained nothing illegal.

This is not the first time that Mr. Li has been sentenced. In 2005, Mr. Li was sent to a forced labor camp for three years for not renouncing Falun Gong. Just 14 months after his release, Mr. Li was arrested again and sentenced to five years in prison in 2009 for writing an open letter to expose the communist regime’s persecution of Falun Gong.

“Brought Back from the Brink of Death”