(Minghui.org) According to information compiled by Minghui.org, 30 Falun Gong practitioners were confirmed to have been sentenced to prison in September 2019, for their faith.

Falun Gong, also known as Falun Dafa, is a spiritual practice centered on the principles of Truthfulness, Compassion, and Forbearance. Since the Chinese communist regime started persecuting the practice in July 1999, many practitioners have been subjected to arrest and detention, imprisonment, torture, forced labor, and even organ harvesting.

Some of the practitioners were sentenced for studying Falun Gong books together, while most others were convicted for raising awareness about the persecution of their faith, including distributing informational materials or talking to people about it.

The practitioners who have been sentenced come from 17 cities in 12 provinces and municipalities in China. Prison terms ranged from 1 to 10 years, with an average of 3.87 years. 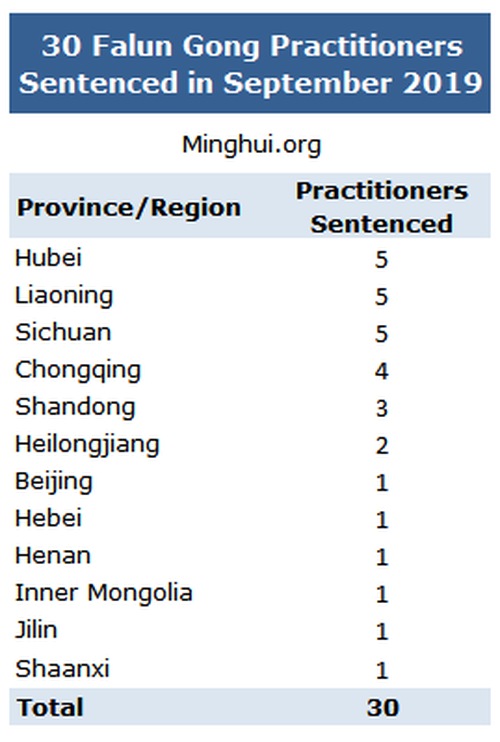 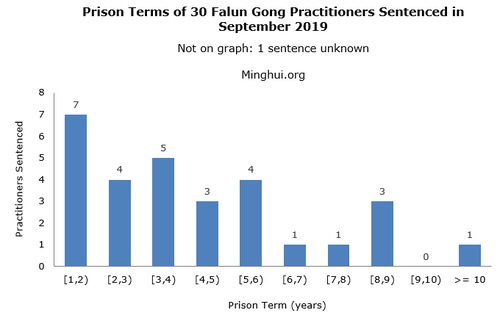 Seven of the practitioners are 65 years or older. In particular, Ms. Feng Chunying, 80, of Jinan City, Shandong Province, was sentenced to two years by the Changqing Court on September 10, 2019.

Seventeen practitioners had money extorted directly by the police or were fined by the courts for a total of 231,110 yuan – averaging 13,594 yuan per person.

Due to the information blockade in China, the number of Falun Gong practitioners who were sentenced cannot always be reported in a timely manner, nor is all the information readily available.

As more and more lawyers step forward to represent the practitioners and enter not guilty pleas for them, the authorities are also trying to block the lawyers' defenses.

In Jinchang City, Gansu Province, the local Judicial Bureau ordered 103 lawyers and 243 paralegals in 11 law firms to sign statements to denounce Falun Gong and promise not to represent Falun Gong practitioners, unless the latter have renounced their faith.

During the court hearing of Ms. Zhang Jing, a resident of Juye County, Shandong Province who was sentenced to 3.5 years on September 30, prosecutor Qin Laifeng said to her lawyer, “How dare you condemn the communist Party, while you are being fed and paid by the Party?” He made this comment when he couldn't articulate how Ms. Zhang had allegedly violated the law.

Below are snapshots of some of the cases of sentencing from September:

Mr. Hong Weisheng was sentenced to ten years with a 50,000-yuan fine.

Ms. Hou Mila and her sister Ms. Hou Aila each got eight years and 40,000 yuan-fines.

Ms. Rao Xiaoping was given seven years and fined 30,000 yuan.

The practitioners all appealed their verdicts to the Wuhan City Intermediate Court.

Mr. Bai Housheng, another practitioner who was arrested with them but was later released on bail, was sentenced to three years with five years of probation and fined 10,000 yuan. He was ordered to report to the residential committee every day.

The five practitioners were seized from an apartment on April 19, 2018, during a gathering. The police ransacked the place and confiscated Falun Gong books and materials, a computer, a printer, and other personal belongings.

The three practitioners were arrested on March 24, 2019 after being reported for distributing informational materials about Falun Gong in Chaoyang County, which is about 90 miles from Huludao.

Officers from the Domestic Security Division of Chaoyang County ransacked their homes the next day.

Ms. Liu's husband and son were also taken into custody, but they were released after the police confirmed that they weren't the driver who took the three practitioners to Chaoyang County.

The police refused to return Ms. Liu's car, which had been confiscated earlier.

They submitted the practitioners' cases to the Chaoyang County Procuratorate on April 19, 2019. The prosecutor approved the arrests five days later.

The three practitioners appeared in the Chaoyang County Court on August 21, 2019 and each was sentenced to five years in prison and fined 10,000 yuan about a month later.

The practitioners have appealed the verdicts to the Chaoyang City Intermediate Court.

Mr. Hu and Ms. Liu also filed complaints against the police and prosecutors for persecuting them.

Mr. Wu Jinggang, a Chifeng City, Inner Mongolia resident, was sentenced to six years. The court didn't inform his lawyer of the sentencing until the window to appeal the verdict had expired.

Mr. Wu and his mother, in her 70s, were arrested on March 29, 2019. Officers from the Bairin Left Banner Domestic Security Division ransacked their residence and confiscated Mr. Wu's Falun Gong books, computer, printer, as well as 12,000 yuan in cash.

Mr. Wu's mother was later taken back home by his younger sister. Mr. Wu was kept in custody at the Bairin Left Banner Detention Center.

Tian Zhijun, the detention center doctor, brought Mr. Wu to his office on the afternoon of April 17, 2019. He stomped on his face and whipped his chest and back. Mr. Wu fainted from the pain. Four officers witnessed the torture.

Mr. Wu appeared in the Bairin Left Banner Court on July 19, 2019. His lawyer entered a not guilty plea for him.

The lawyer called Mr. Wu's family on September 17 to tell them that he was just informed by the court that Mr. Wu was sentenced to six years and that he had a ten-day window to appeal the decision. But by the time the lawyer received the text from the court, the appeal deadline had already passed.

Ms. Fan and Ms. Liu were each sentenced to two years, and fined 4,000 and 3,000 yuan respectively. They were ordered to serve time outside of prison.

The three women, of Suining City, Sichuan Province, were arrested on March 20, 2019 while studying Falun Gong books together.

Ms. Ji Chunmei, a resident of Sanmenxia City, Henan Province, was recently sentenced to eight years in prison. Her family was kept in the dark during the process.

Ms. Ji was arrested on October 16, 2018. The police ransacked her home and confiscated her computer, printer, Falun Gong materials and a certificate of deposit for 10,000 yuan.

She was held at the Sanmenxia City Detention Center before being sent to Xinxiang Women's Prison.

“Meeting People Who Are Predestined To Be Saved”