(Minghui.org) Falun Gong practitioner Mr. Zheng Xiangxing was readmitted to Baoding Prison Hospital on February 21, 2013. It had only been an hour since his lawyers had left him. They demanded judicial intervention, verification of facts, and compensation for their client.

On February 21, 2013, at 1 p.m., Hou Yongjun, director of Baoding Prison Hospital, took him back to the prison hospital without informing Mr. Zheng's family. He did so after he learned that Mr. Zheng's lawyers had just left an hour earlier.

Mr. Zheng's family members were distraught and concerned when they heard this. They knew that the prison hospital would not take care of him, but would instead torture him more. Early on the morning of February 22, the family went to Baoding Prison to visit. Deputy Warden Fan took them to the prison hospital, and director Hou Yongjun then led them into a large ward.

As large as it was, it contained only two beds. One was empty. Mr. Zheng was in the other.

Four inmates stood next to him. Also present were two young men referred to as “doctors.” The young men were in brand new white coats that appeared they had just put on. Only two pieces of medical equipment were visible: an oxygen tank and an electrocardiogram machine. There was nothing else in the ward.

It was hard for the patient's family not to think that it was all just a set-up.

Mr. Zheng was sitting up in bed with his feet against the bed rail. His wife Sun Suyun asked the doctors why he was not lying down. They said it was to give him exercise to regain strength more quickly.

She asked her husband, “Do you know where you are?” He replied, “No, I don't know.” When she told him he was in the prison hospital, tears fell from his eyes. His wife noticed that he looked much more distressed than he had just the day before.

Mr. Zheng's wife asked the doctors, “Why is it so cold in here? Even though I am wearing a down jacket, I still feel cold. This cannot be good for any patient!” She voiced her concern about the few, simple pieces of equipment they had available to treat her husband and asked if they could transfer him to a better hospital.

Hou asked her where she would like him to go. She mentioned a reputable hospital in Beijing. Hou said that if the hospital was within his province, it might have been possible, but since it was in Beijing, it was not possible. Furthermore, a medical appraisal had to be conducted before any transfer. 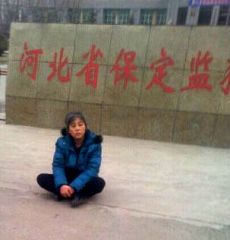 On February 22, a formal request to transfer Mr. Zheng to a better hospital was denied by the prison authorities. The next morning, Mr. Zheng's wife and son again went to see him.

The prison security guard told them that a visit was not possible, because it was a holiday and the person in charge was not in. They begged the guard to let them in, but he wouldn't budge. Worried and heartbroken, they sat down at the prison gate and cried quietly.

A lot of people passed by the prison gate. Some of them asked why the two were so distraught. Mr. Zheng's wife started telling them how her husband had been tortured inside the prison.

The passersby were very sympathetic and even suggested that she should post her story on the Internet. Others suggested calling the TV station to see if they would report the wrongdoing. It was also suggested that they take the prison authorities to court.

The security guard tried to drive the gawkers away, but by then there were so many that he was ignored. At 3 p.m. Mr. Zheng's wife was still telling the onlookers her story when a prison head came and drove them home in a car.

Mr. Zheng, 45, was once strong and healthy, but he became totally unrecognizable after just two months in Baoding Prison.

One of his eyes was badly swollen and totally bruised. He was emaciated and looked like a skeleton lying on the bed. Even his family couldn't recognize him.

Mr. Zheng was arrested a year ago, on February 25, 2012. On May 29, his family hired three lawyers to defend him. Their logical and reasonable arguments during his trial stunned the District Court of Tanghai.

Despite evidence and facts, the Court still chose to illegally sentence Mr. Zheng to 10 years in prison.

On August 8, he was sent to Baoding Prison. On September 9, his family went to see him, but the prison authorities turned them away. On October 26, Mr. Zheng was severely tortured, resulting in a cerebral hemorrhage. The following morning, he was sent to the First Central Hospital of Baoding. His pupils were enlarged, and he was incontinent. He was essentially dying.

Without telling his family, the hospital performed two craniotomies on Mr. Zheng. The doctors said that, when they opened his skull, his brain, which was filled with blood, had burst. They believed that the cerebral hemorrhage and brain injury were caused by heavy blows to the head. As a result, about 7cm of his skull had to be removed. Part of the left side of his brain, which is responsible for language, vision, and memory, was affected.

Video Provided by Prison Authorities Only Raises More Questions
The Baoding Prison authorities provided the family with a video that showed Mr. Zheng shortly before and then after his collapse.

On October 26, 2012, as shown in the video, Mr. Zheng began vomiting blood. He did so a total of six times. While this was happening, no one in the prison came to his assistance. One inmate came by and mopped up the blood with a rag. By 5 p.m. he had a great deal of difficulty getting up. He stumbled into the restroom, vomited some more, and collapsed. He fell down and passed out. He lay there a long time, but no one came to help him. Around 8 p.m., two inmates came in and carried him out of the cell. The prison authorities told Mr. Zheng's wife that he was taken to the prison hospital.

This only raised more questions about how Mr. Zheng had been mistreated. Why did he collapse? Why was he vomiting blood? If he fell on the back of his head, why was there a major crack on the left side of his head? And why didn't the prison authorities provide the family with a video of Mr. Zheng's surveillance 24 hours a day in the prison, instead of a brief video of when he collapsed. What did the prison authorities do to try to "transform" him?

Doctors in the First Central Hospital of Baoding did several CT scans of Mr. Zheng's brain. They believed that his brain cells were dead and that his chances for survival were slim to none. However, he did survive, and his brain was not severely affected. His memory was returning and he was able to open one of his eyes.

The prison authorities now knew that Mr. Zheng would recover. They had not expected this. From their point of view it would be better if he died. This was why he was forced back to the prison hospital: While he would likely survive with proper care at home, he would likely die if held in the prison without it.

Many Falun Gong Practitioners Tortured to Death in Baoding Prison

Why didn't the Baoding Prison authorities want Mr. Zheng to survive? What was their ulterior motive?

When Mr. Zheng's family went to see him on September 9, the prison authorities claimed with great confidence that that practitioners sent there would all be successfully “transformed” (i.e., made to renounce their beliefs).

The implication was that practitioners who did not cooperate and “transform” could be treated like practitioner Mr. Wang Gang from the Zhuo District. Mr. Wang was hung on a large wooden board and tortured, leaving him disabled. Mr. Wang was allowed no contact with anyone outside the prison. The prison authorities withheld all information about him and monitored him 24 hours a day. Mr. Wang was later transferred to Jidong Prison in Tangshan City, where he was tortured to death.

Practitioners refusing to be “transformed” could also be treated like practitioner Mr. Li Yansheng from Xingtai City. He had his finger cut off and was beaten so brutally that his spleen ruptured and he sustained injuries to his liver, gall bladder, stomach, and bladder.

Other practitioners that resist being “transformed” might be treated like practitioner Mr. Guo Hanpo, owner of a jewelry store in Cangzhou City. He was brainwashed, tortured, and locked in a cell until his death. In order to cover up their evil deeds, the prison authorities didn't allow Mr. Guo's family to take his body back to Cangzhou City to be buried in his hometown. Instead, they cremated him in Baoding City and threatened Mr. Guo's family not to appeal to the higher court.

It is no wonder that Mr. Zheng, who refused to be “transformed,” was in such dire condition after just two months.

What role did the Baoding Prison authorities play? They allowed Mr. Zheng to be operated on without approval from his family. Mr. Zheng's medical records, treatment protocol, and drugs used were kept from his family. The family was secretly being watched by undercover police officers, who also monitored his friends and other relatives. Mr. Zheng was not released even though he was on the verge of death.

Mr. Zheng's lawyers demanded a response from the prison authorities before noon on September 21. Otherwise, they would go to the Procuratorate to file a complaint against them.

Background
Mr. Zheng Xiangxing was an appliance store owner in Shinongchang, Tanghai County. He and his wife were honest merchants and provided home delivery and installation. Because of their honesty and integrity, their business was very successful, and they were highly regarded in the community. All the locals went to Mr. Zheng for everything from motorcycles to refrigerators. Everyone trusted him. Mr. Zheng also repaired motorcycles for his customers free of charge.

On February 25, 2012, at 6 a.m., Li Fuguo, captain of the domestic security division in Tanghai County; the director of Shinongchang Police Station; and over a dozen officers who had previously pretended to be customers broke into Mr. Zheng's house and arrested him. They confiscated his valuables.

People who heard about this were filled with anger, calling the police "bandits." Over 560 local citizens signed petitions and added their thumbprints, demanding the release of Mr. Zheng. They all regarded him as a good and upstanding person who cultivated himself according to Truthfulness-Compassion-Forbearance. This incident caused great repercussions at home and abroad. 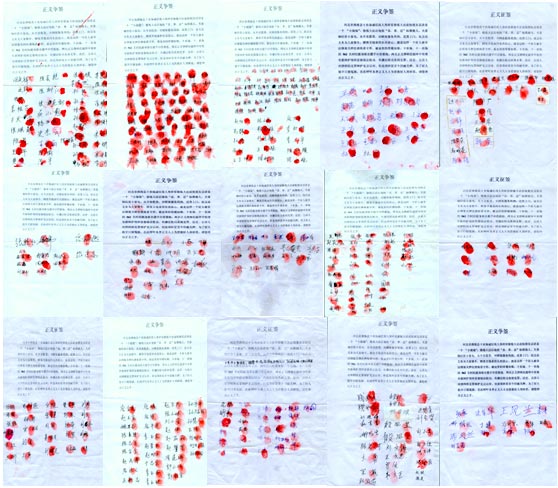 7,000 People in Hebei Province Add Their Fingerprints
to a Petition in Attempt to Obtain Mr. Zheng's Release

After word got out that Mr. Zheng had been sentenced to 10 years in prison and tortured almost to death, there was a wave of indignation. Many gave their fingerprints and/or signatures in an attempt to secure Mr. Zheng's release. Some of them said, “The Communist regime is evil and pure rubbish!” A 70-year-old lady said, “What kind of society would sentence someone like Mr. Zheng to 10 years in prison? What kind of society is this? It is heading for demise.”

Please refer to the original Chinese text  for more names and telephone numbers.

Past Reports on Mr. Zheng's Situation:

-When an Honest Man Is Tried, Hundreds Sign a Petition to Demand His Release and the Area Experiences Earthquakes and a Sandstorm

-Fellow Villagers Concerned About Mr. Zheng Xiangxing and His Family

-An Open Letter Asking for the Release of Zheng Xiangxing

-Another Petition with Over 4,000 Signatures Calls for the Release of Mr. Zheng Xiangxing and for the Responsible Parties to Be Brought to Justice (Photos)

“Paralyzed Woman Recovers by Practicing Falun Gong, Once Again Disabled after Torture and Abuse in Detention”