China has always denied its organ harvesting from living Falun Gong practitioners. However, it changed its position on prisoners in 2013 and claimed that it will mix organs of death row prisoners and voluntary donors in the new computer-based organ allocation system.

At a recent forum at University of Toronto on May 28, Mr. Matas analyzed the situation as a two-fold approach by the Chinese Communist Party (CCP) in responding to criticism: rudeness and charm.

Rudeness is the CCP's approach to Falun Gong practitioners: “The repression itself is denied. But the denials are accompanied by such vituperation against Falun Gong that the responses in themselves are an incitement to repression, evidence that the repression exists.”

The “charm” approach, which Mr. Matas describes as “hypocrisy” as the CCP states “We agree in principle. We will change. Give us time. Help us.” is used on the criticism of using organs from death row prisoners.

“As long as the words Falun Gong are not used and the critic restricts the criticism to sourcing of organs from prisoners, the response of the Party/State has been accommodating,” he said.

Mr. Matas' conclusion: “The difference between these two responses, rudeness and charm, is style, not substance. In neither case is there real change.” 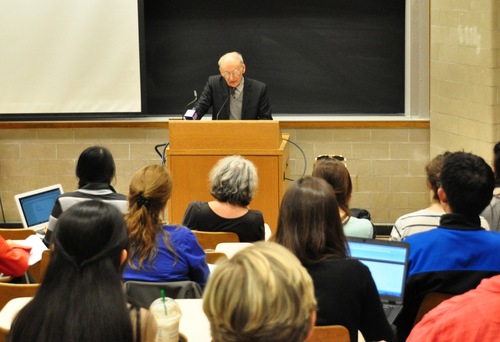 Prominent human rights lawyer David Matas speaks at a forum at University of Toronto on May 28, 2014.

Mr. Matas shared the methodology used in the joint investigation conducted by him and David Kilgour, a former Canadian diplomat and crown prosecutor. As a refugee lawyer, Mr. Matas is no stranger to the challenges of proving or disproving a client's story with minimal evidence to start with.

He and Mr. Kilgour followed four principles in their work: never to rely on rumors or hearsay; refuse to rely on information from perpetrators; insist on public information; and avoid drawing conclusions from one method or one bit of evidence only.

Calls to doctors in China have confirmed the organ source as living Falun Gong practitioners.

The short wait time, a matter of two weeks for a matching organ in China versus months and years in other countries with established organ donation systems, points to no other explanation but a huge living organ pool.

The conclusion of his independent investigation is that organ harvesting from living Falun Gong practitioners indeed took place and is still going on. Mr. Kilgour and Mr. Matas have shared the same investigation and its results described at the forum on May 28 across the globe.

Many politicians and medical professionals found their study convincing. As a result, the European Union passed a resolution in December 2013, condemning the state-sanctioned organ harvesting crime in China. The Asia Subcommittee of the House Committee on Foreign Affairs in the U.S. Congress marked up a similar resolution (HR Res. 281) in the same month.

Forums and hearings were held in parliaments across Europe: Slovakia, Italy, Israel, Sweden, UK, France, and others.

The Illinois State House of Representatives passed a resolution in February 2014, urging “the United States government and the U.S. President to investigate organ transplants in China and take all reasonable steps to bring an end to the revolting practice of harvesting organs from living Falun Gong practitioners for transplants.”

On May 31, Medical Society of Virginia passed a resolution to condemn the crimes of organ harvesting and support the pending congressional resolution. 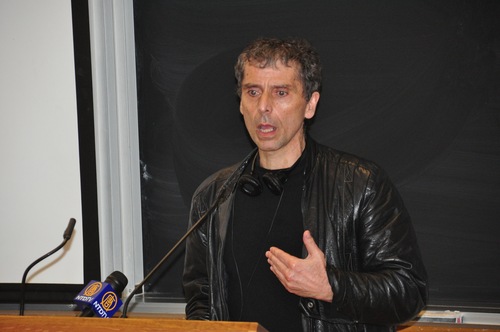 George Marcello, founder and CEO of Step by Step Organ Transplant Association, have been in the organ transplant world for 20 years and done a lot of work in Asian communities in Canada.

“If you are going to China to receive an organ, you are taking part in a murder, except you are not pulling the trigger, that's all,” he said.

He suggested that everybody who has received organs in China to start protesting to advocate for change: “Look in the mirror and ask yourselves: can you live with yourself after knowing that someone got murdered for you to live?”