(Minghui.org) Falun Gong practitioners in Illinois have received a copy of a resolution passed by the Illinois House of Representatives on February 26, 2014. It urges “the United States government and the U.S. President to investigate organ transplants in China and take all reasonable steps to bring an end to the revolting practice of harvesting organs from living Falun Gong practitioners for transplants.”

Copies of the resolution were also provided to U.S. President Barrack Obama and the Chinese Ambassador to the U.S. Cui Tiankai.

In addition, the resolution requests the United States government to prohibit any doctors who performed transplants using organs harvested from Falun Gong practitioners from entering the United States. 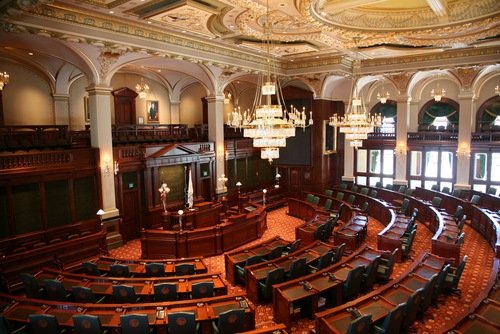 Interior of the State of Illinois House of Representatives

The Illinois House of Representatives passed a resolution condemning the persecution of Falun Gong and organ harvesting in April 2006, as soon as the news broke. Between 2006 and 2014, a lot more evidence has been collected, and more governments and individuals have taken a stance on the issue.

Ethan Gutmann, a renowned researcher and journalist, is among the investigators cited in the 2014 resolution and estimated that approximately 65,000 Falun Gong practitioners have had their vital organs forcibly removed between 2000-2008.

Other sources cite that this number could be even higher, and with the Chinese Communist Regime reaping large profits from organ trade on the black market, it is probable that these heinous crimes will persist unless members of the international legal, medical, and human rights communities take action to stop it.

This state level resolution comes after the European Union Parliament passed in December 2013 a resolution condemning organ harvesting of Falun Gong practitioners. A similar resolution is also pending with the Committee of Foreign Affairs in the U.S. Congress.

In its 2013 Country Reports on Human Rights released at the end of February, the U.S. Department of State stated, “Advocacy groups continued to report organ harvesting from prisoners.” This echoes its first report of such crimes in 2011, “overseas and domestic media and advocacy groups continued to report instances of organ harvesting, particularly from Falun Gong practitioners and Uighurs.”

“Police Are Awakening and Helping Practitioners”