(Minghui.org) On March 5, 2014, the Italian Senate's Human Rights Commission unanimously passed a resolution urging the Italian government to launch a thorough investigation into organ harvesting in China through diplomatic and other channels. The resolution also urges the Chinese Communist Party (CCP) to immediately release prisoners of conscience, including Falun Gong practitioners.

In the resolution, the Extraordinary Commission for the Protection and Promotion of Human Rights also requested the Italian government to reconsider training programs for Chinese doctors and prosecute, in accordance with international conventions, individuals involved in organ trafficking. 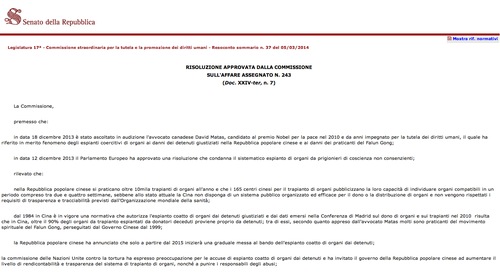 Screenshot of the official record of the resolution passed on March 5, 2014

This resolution came after a senate hearing on the same issue on December 19, 2013. David Matas, a well-known Canadian human rights lawyer, made a presentation at the hearing, urging Italy to revise its laws in order to keep the country from becoming an accomplice to the crimes of forced organ harvesting in China.

The Commission concluded that among the vast numbers of organ transplants that have been conducted in China—often on very short waiting times, which would be impossible without a live supply of donors ready to meet any organ demanded—many organs have been from Falun Gong practitioners.

Matas and his co-author David Kilgour, a former Canadian parliamentarian and crown prosecutor, concluded that over 40,000 organs had been harvested from Falun Gong practitioners from 2000 to 2005.