(Minghui.org) La Repubblica, the second largest daily newspaper in Italy, called organ harvesting “monstrous acts” in its report on December 23. This report followed several media reports on the same topic . The Human Rights Committee in the Senate of the Italian Parliament held a hearing about this state-sanctioned crime on December 19.

Mr. David Matas, a world-renowned human rights attorney and an expert on the issue of forced organ harvesting in China, testified at the hearing. He is also featured in the La Repubblica report entitled “The Battle of David for Prisoners in China.” 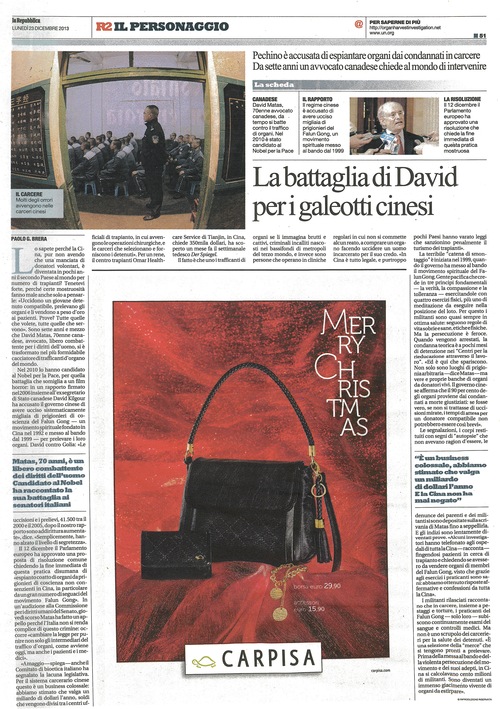 The report says that China, a country that has very few voluntary donors for cultural reasons, became the second largest organ transplant nation within a few years. Mr. Matas' battle sounds like a horror movie: the Chinese Communist Party (CCP) has systematically killed tens of thousands Falun Gong practitioners for their organs. There were hundreds of millions of Falun Gong practitioners in China before the persecution started in July 1999. Now they have become a huge live organ depot for the purpose of extinguishing the belief, says the report.

The La Repubblica article states that the organ trade is a very lucrative business for China's prison system. Mr. Matas believes that about one billion US dollars are circulating among different organ transplant centers and prisons that pick and supply organs from detainees.

Normally one would imagine an organ trade dealer to be despicable and hide in a slum in a third world country. The report says that the case in China is different: dealers work in professional hospitals, conduct the trade and kill prisoners of conscience on demand. There are no legal consequences due to the nationwide persecution of Falun Gong.

Mr. Matas and Mr. David Kilgour, a former Canadian diplomat and crown prosecutor, have concluded that 41,500 Falun Gong practitioners were subjected to forced organ harvesting between 2000 and 2005. Mr. Matas believes that the number is still increasing and that the CCP has kept the information more secret after they published the results of their investigation.

At the Senate hearing, Mr. Matas recommended Italy to revise its laws to prohibit it from becoming an accomplice to the crimes of organ harvesting in China. The Italian Bioethics Committee reported the legislative gap in May 2013.

The European Parliament passed a resolution on December 12, calling on the Chinese government “...to end immediately the practice of harvesting organs from prisoners of conscience and members of religious and ethnic minority groups.”

“General Manager of Logistics Company Critically Ill Due to Torture”