(Minghui.org) The first briefing in the National Assembly for Wales about crimes of forced organ harvesting in China – killing Falun Gong practitioners for their organs – triggered deep concern and vigorous discussion of potential solutions. Assembly Member Mr. Rhodri Glyn Thomas, co-chair of the briefing, vowed to initiate a motion to demand the end of these crimes.

The briefing was complimented as a “precious first step” by Cardiff City Council Member Ms. Cecilia Love, who has Chinese ancestry. Media, religious professionals and student leaders from Cardiff University all expressed deep concern over the issue and planned next steps within their sphere of influence to get the word out and gather support to end the crimes. 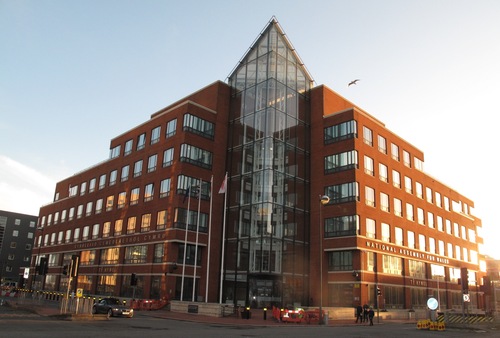 A briefing on the crime of organ harvesting from living Falun Gong practitioners in China is held in the National Assembly for Wales on November 12, 2013

Mr. David Kilgour, former Canadian Secretary of State for the Asia-Pacific, Mr. Ethan Gutmann, China expert and author of Losing the New China , and Professor Li Huige, the European representative of DAFOH (Doctors against Forced Organ Harvesting), presented their investigative reports of the crimes of organ harvesting from living Falun Gong practitioners. They also gave credit to the international community for its efforts in stopping the persecution.

Mr. Rhodri Glyn Thomas: We have to bear the moral responsibility to uphold the human rights of the victims 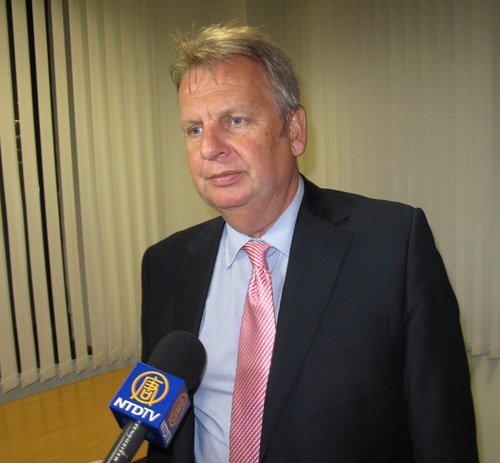 Rhodri Glyn Thomas, a Welsh Assembly Member, is interviewed at the briefing.

Mr. Rhodri Glyn Thomas expressed that everyone should be greatly concerned about the issue of live organ harvesting that is taking place in China, where the Chinese Communist Party (CCP) is making immoral profit on organ transplants. Mr. Thomas stated that the Welsh National Assembly, as a democratic forum, should declare its position on this crime against humanity and bear moral responsibility. He offered to raise the issue in the Welsh National Assembly.

He said, “Live organ harvesting for profit is totally unacceptable, regardless of wherever it happens. We all have a moral obligation to protect him or her regardless of whoever is abused to such an extent.

Mr. Thomas stated that he was going to initiate a motion in terms of putting an end to the crimes of organ harvesting from living Falun Gong practitioners. He believed that further debate about the issue in the National Assembly for Wales was paramount.

Cecilia Love, a Labour Party council member of Cardiff City, has a Chinese ancestry in her lineage. It was the first time that she'd been informed of the organ harvesting from living Falun Gong practitioners by the CCP. She was shocked.

After the briefing, Ms. Love continued to discuss the issue with the participants, and accepted an interview. She first confirmed the importance of the press briefing in letting more people know about something that they were not willing to believe was taking place. She said, "It is really shocking to know there have been such large scale and unexpected crimes for dark, massive profit. ... I believe today’s briefing is of great importance. It is a valuable first step for people who look for improvements to be aware of the crime in the perspective of cross-parties and upholding human rights as well."

Ms. Love also pointed out that the crime of live organ harvesting – a crime against humanity – must be unanimously opposed and stopped in Wales. She said, "The atrocities are a violation of human rights, transcending cultural context and making a challenge to humanity. I hope that the British politicians will not evade the problem in the perspective of human rights. I realize that there has been traditional value in Wales that human rights comes first. Today there are Council members at the meeting coming from different political parties, which indicates that we are all concerned about the human rights issue. I believe no party will accept such human rights abuses."

Cardiff radio host: This is an issue that concerns us all 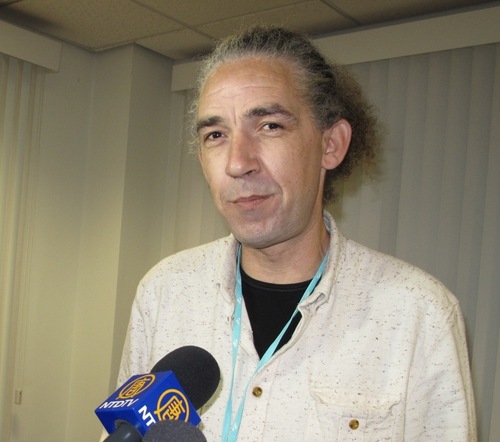 Big Scott, Cardiff radio host, is interviewed after the briefing.

Big Scott, popular Cardiff radio host, exposed the CCP’s crime of organ harvesting from living Falun Gong practitioners on his radio show. He hoped, after attending the briefing, that more people could be offered the chance to know the shocking truth of the persecution taking place in China. He believes that those who understand the truth of the matter will seriously consider what they can do on their part to stop the CCP's genocide of Falun Gong practitioners.

Big Scott said, "I hope everyone walking out from this room will pass the truth of the persecution to more people and more MPs. I hope they can tell people clearly how important the issue is so that the people who receive the truth can realize that it is concerned with each one of us, who would immediately say, 'I have to attend the briefing to find out the truth by myself.’ It is simply not the same issue as those usually debated hotly in the parliament by the MPs. It is essential that everyone should make a big effort to bring an end to the CCP’s atrocities.

“Indeed this is a crime against humanity. What an absurd notion it is in today's society to put a person in jail to harvest his or her organs for trading! It is almost in the same way to treat animals. They are simply killer butchers! We must not allow things to happen in this way. Wherever we live, we cannot ignore it! We have to open our eyes to face the reality. We must do something to stop the crime. "

"The signature everyone submits is certainly of tremendous power!”

Catholic priest: The international community must be unanimous in the condemnation of the extreme violations of human rights 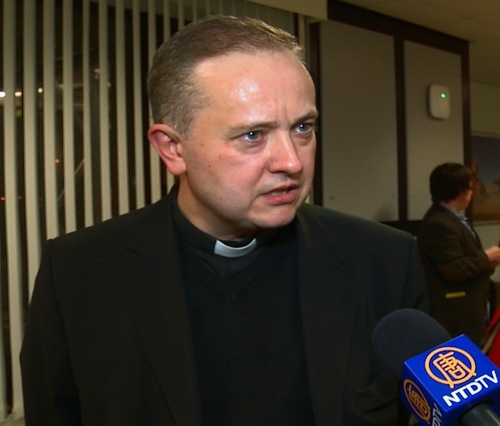 Dr. Gareth A. Jones, a Catholic priest at Cardiff University, attended the briefing with a group of medical and law students from Cardiff University. He believes that the CCP’s atrocity of live organ harvesting from Falun Gong practitioners is an extreme violation of human rights, which must be unanimously condemned by the international community.

Dr. Jones said, “Any involuntary donation of organs and forced organ harvesting from living human beings are considered as very serious violations of human rights. They must be condemned regardless of in whichever country and at what time the crimes are committed. ... I believe that every civilized person on the earth would be shocked by such a terrible atrocity in reality. Every one of us is supposed to sign the (DAFOH) petition form.

“Live organ harvesting and organ trafficking are involved with the issue of the most basic of human rights, which is not confined to the boundaries such as nationalities, religious beliefs and political views. It is about the fundamental legal issues in human society, and should be considered in the international legal framework. Accordingly, the issue is greatly related to the British government, local government, law students and medical students, etc.”

Dr. Jones pointed out that the British Government plays a key role in whether a right decision could be made on this serious issue. He hoped that the British government will not sacrifice human rights principles under CCP pressure. He called for all young students who attended the briefing to consider seriously the information conveyed and to stop human rights violations through their joint efforts.

President of Cardiff University Law Society: We should make sure not to let such a crime happen again 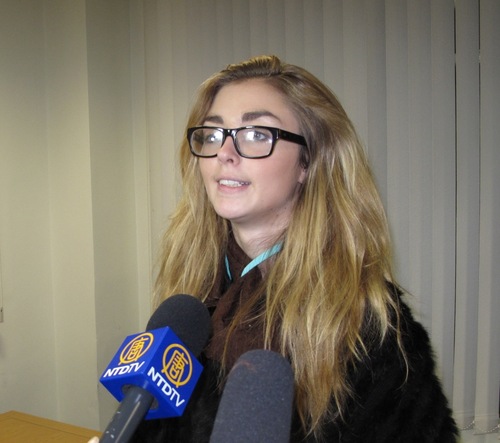 During the presentation, Enfys Jenkins, president of the Cardiff University Law Society, was shocked by the CCP’s crime of organ harvesting from living Falun Gong practitioners. She raised her question to the host and the guest speakers at the briefing: As students, what can we do to help stop the atrocity?

Ms. Jenkins later gave her action plan in an interview: In her tenure as president of the Cardiff University Law Society, she would make the best use of the information channels within the university, such as the mail system, magazines, and newspapers, and so on, to make more teachers and students aware of the crime, and to encourage them to sign the DAFOH petition form.

She continued, "We pledge to do what we can as students to help put an end to this atrocity, and make sure that it won’t happen again in the future."

In response to the questions raised by Ms. Jenkins, Mr. Williams, who presided over the meeting, encouraged her and the other participants to knock on the doors of their own Welsh Assembly Members (AM) and the Members of Parliament (MP) to directly express their demands and wishes in a joint effort to stop this terrible crime.