(Clearwisdom.net) On the evening of September 16, the New York based Divine Performing Arts presented the third show of the Mid-Autumn Spectacular at the John Bassett Theater in Toronto. The show features classic Chinese dance and brings many beloved Chinese legends to life. When the show concluded, it received a standing ovation from the audience and the performers took three curtain calls. 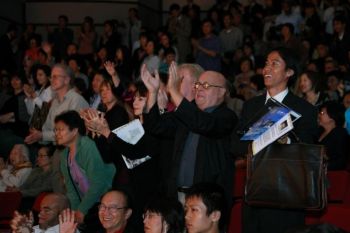 Members of audience give Mid-Autumn Spectacular a standing ovation at the conclusion of the third performance in Toronto. (Victor Chen/The Epoch Times)

TORONTO--Friday night's performance of the Mid-Autumn Spectacular by Divine Performing Arts left more patrons buzzing about caliber and content of this one-of-a-kind show.

TORONTO--Elvis Stojko is one of the most successful and well-known Canadian figure skaters to ever take to the ice. He's a seven-time Canadian champion, three-time world champion, and two-time Olympic Silver medallist.