(Minghui.org) A former steel engineer in Tianjin was arrested in 2012 and later sentenced to seven years in prison for not renouncing his faith in Falun Gong, a spiritual discipline that has been persecuted by the Chinese communist regime since 1999. 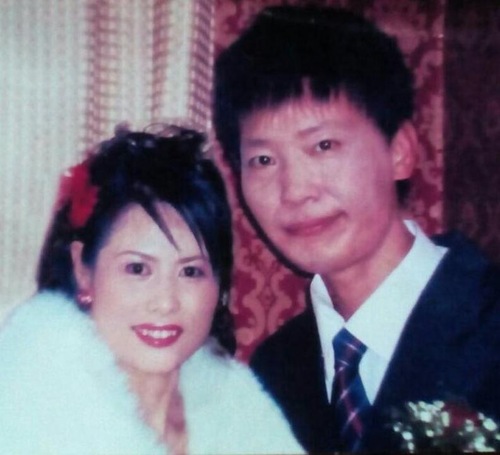 Mr. Huang Liqiao first served time at Xiqing Prison before being transferred to Binhai Prison in April 2014, where he served the rest of his term until he was released on April 6, 2019.

His wife wasn't allowed to visit him in prison for five years. With her tireless efforts to seek justice for him, she finally saw her husband on January 11, 2017.

Below, Mr. Huang recounts the severe beatings he suffered during the imprisonment at Xiqing Prison.

After I was put into solitary confinement, the inmates tied me to a bed spread-eagle day and night. When they were in a bad mood, they would tighten the ropes to increase my suffering. I could hear my bone and muscle snap. I fainted again and again from the pain.

Inmates Liu Hui and Han Wenliang often beat my thighs and stomach. Sometimes they thought my limbs weren’t being stretched tightly enough, so they pulled me up and tied me to a metal chair. They scrubbed my armpits and ribs with a toothbrush. The pain was so intense that I couldn't breathe.

One day in March 2013, inmate Luo Hao came to my room and ordered Sun Jinyong to torture me. Sun tightened up my limbs and beat my legs and stomach, together with Li Peng.

Seeing that I was still able to move my body, trying to avoid the beatings, Luo tied my lowered abdomen to the bed, and they continued to beat me. My body twitched from the pain.

They beat me for about ten minutes. Then I heard someone said to Luo that they couldn't beat me like that, or I would die.

Luo loosened the tape around my belly. They beat me for another ten minutes before leaving for a break.

About one month later, Luo and Li came back and beat me in the same way for more than half an hour. After that, they hung me up on the window frame by the wrists from behind my body. Luo said that this area wasn’t covered by surveillance cameras. I fainted from the excruciating pain. 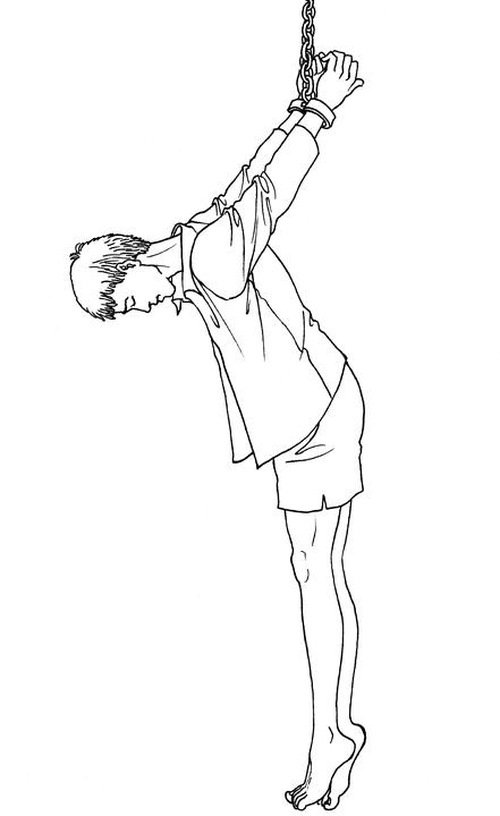 Torture illustration: hung up from the back

I was lying on the ground when I woke up. As soon as I opened my eyes, Luo and Sun began to kick my legs and stomach. I felt my internal organs were falling apart.

When they grew tired, they carried me back to the bed and tied up my limbs again. I began to vomit blood. I told them that I felt I was dying. Sun then loosened the rope.

For the next few days, the room I was kept in was extremely quiet. Everyone was anxious to see whether I would survive.

Two months later, the prison guards took me to the hospital for a CT scan to confirm I had recovered. But the inmates were never punished for beating me.

Tianjin Man Finally Gets to Appeal His Case, Five Years into a 7-Year Term

Tianjin Prison Authorities Have Denied Mr. Huang Liquiao's Wife to Visit Him for Over Two Years

Tianjin Engineer Sentenced to Seven Years in Prison, Wife Not Allowed to Visit

42-Year-Old Engineer Pushed into Courtroom in a Wheelchair

An Engineer Falun Gong Practitioner Who Was Reduced to Delivering Water after Being Persecuted, Appeals in Tianjin City, China

The Persecution of Falun Gong Practitioners in Tianjin