(Minghui.org) It was her husband's birthday, but she didn't have the luxury to plan a celebration party. Instead, she stood outside Binhai Prison in Tianjin for a whole morning until a guard finally came out and took the flowers she had bought for her husband. The couple wasn't allowed to see each other that day. 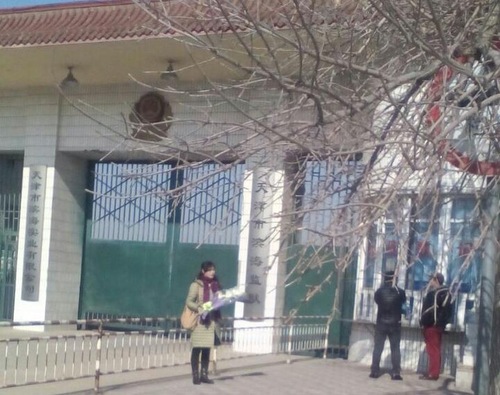 Ms. Ge brought her husband Lily flowers, which in Chinese culture signify purity and determination. She wanted him to know that she is determined to seek his release, as he had done nothing wrong in exercising his constitutional right to freedom of belief.

Ms. Ge, also a Falun Gong practitioner, and Mr. Huang had been repeatedly arrested for their faith. They were both given forced labor in 2008. Mr. Huang was arrested again on April 7, 2012, and sentenced to 7 years in prison on September 26, 2012. He had become critically ill at the time of his sentencing, but instead of being granted parole, he was transferred to prison shortly afterward.

Ms. Ge wasn't allowed to visit her husband in prison until almost five years later, on January 11, 2017. Only then did she learn that her husband's petitions to appeal had been withheld by the prison. She told her husband that she was once detained for 25 days for trying to seek his release.

Ms. Ge hired a lawyer, and together they visited Mr. Huang on March 21, 2017. That day, the lawyer helped Mr. Huang submit his appeal to Tianjin First Intermediate Court. The case was registered on May 2, 2017, and Judge Hou Jinzhuan ruled six weeks later to uphold Mr. Huang's original verdict.

Ms. Ge proceeded to file a motion with Tianjin Superior Court to reconsider her husband's case on July 31, 2017. The superior court registered the case one month later. Judge Zhao Ying met with Ms. Ge and the lawyer on October 24. Ms. Ge wrote a letter to the judge and other superior court officials after the meeting, urging them to acquit her husband. The court ruled on November 22, 2017, to reject her motion. 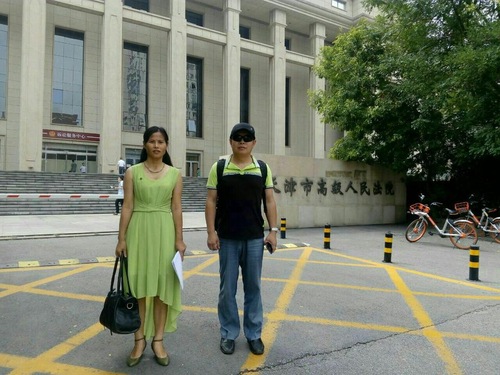 Ms. Ge and the lawyer submitted her motion to Tianjin Superior Court on July 31, 2017.

“On October 24, 2017, I had a meeting with Judge [Zhao] in the Third Courtroom in Tianjin Superior Court to discuss my motion to reconsider [my husband's] case. When the judge asked me if I had any additional evidence besides what was included in the motion, I didn't know how to answer at the moment. The judge then turned to talk to the lawyer.

After I returned home from the meeting, I thought more about the evidence. In movies, knives, guns, sticks, clubs, and drugs are often depicted as prosecution evidence. But there is no such evidence to prove Huang Liqiao had committed a crime. He was sent to prison to suffer endless torture. I took a look at the original verdict and noted that the Falun Gong books confiscated from my home was listed as evidence to sentence him. As a matter of fact, those books were only used by me, as Huang Liqiao liked to read electronic books on his devices or computer.

Huang Liqiao has been wronged. In order to judge a person's guilt, one must examine whether what he did has harmed other people. Aren’t people's actions the best evidence?

All [Huang Liqiao] did was to save people and preserve the purity and truthfulness they still had deep inside their hearts. Once a person loses his characteristics of truthfulness, he'll tell lies and commit fraud. If he is in a position of power, he may abuse his power to harm people. No wonder there is so much fraud going on in every aspect of our society.

The first time they came, I said that morality is more important than the law, which should be based on morality. I reiterated that a law without consideration for morality is an evil law and at best a weapon that is used to attack or even kill innocent people. I urged them to not violate the law while enforcing the law.

When they came the second time, Li Kedong asked me if I knew where I was being detained. I replied, 'This is not hell. There is still sunshine. Sooner or later, what happens here will be exposed under the sun. Anyone who lives between heaven and earth is subject to the heavenly law. Dictators are no exception.'

They accused me of not following labor camp rules. They left in a hurry but ordered the labor camp to lace my drinking water with drugs that damage the central nervous system. I almost died. What befuddled me the most was that they instructed drug addicts and prostitutes to watch over me around the clock. What was the logic there?

I was released at the end of 2009. In the spring of 2011, I heard that Zhang Chunyan, a team captain at Banqiao Women's Labor Camp, had died of illness and left behind a seven-year-old daughter. I felt sad that I didn't do enough to make her understand that persecuting Falun Gong practitioners would only harm her.

I also remember that the labor camp commissary shop sold goods at prices much higher than outside markets. When I brought this up to a team leader, he ordered people to beat me up. I almost died.

If I had not personally experienced these, I'd never had believed there would be people like labor camp guards that would be so rampant [in persecuting innocent Falun Gong practitioners]. There is much more that I cannot describe in words.

It is totally unacceptable that my husband has to suffer so much [for doing nothing wrong] all these years. He graduated college in 1988 and became the first group of employees at Tianjin Seamless Steel Pipe Company. He signed an employment contract with no expiration date.

He was an engineer with integrity and loyalty. He never thought to quit his beloved job. However, in 2008, his company, a large state-owned enterprise, betrayed him without his knowledge. They deceived his brother to sign paperwork to terminate his lifelong employment contract. The mastermind behind the illegal practice was the 610 Office (editor’s note: an extralegal agency tasked with eradicating Falun Gong).

During Huang Liqiao's years-long imprisonment, he has been subjected to torture and denied his legal right to appeal his case. I wasn't allowed to see him for almost five years.

I cannot afford [emotionally] to continue describing [what has happened to my husband]. I ask the judge to personally investigate the case and restore the truth.

What matters more than life itself is people's true nature. Only by nurturing kindness in our hearts can we become people of benevolence, loyalty, propriety, and truth. If we practice truthfulness and compassion, we can have tolerance when encountering problems. I grew up in a rural area and didn't even finish elementary school. If [the imprisonment of my husband] hadn't violated my moral compass, I wouldn't have had the courage to face the threat of life and death and to persevere all these years.”

Mr. Huang's case has been widely covered. This new report has some additional information on a special kind of torture he suffered while held at Hebei District Detention Center following his latest arrest on April 7, 2012.

The torture was dubbed “meat grinding.” A guard cuffed Mr. Huang's right hand tightly. He then grabbed the handcuff with one hand and used another hand to grab Mr. Huang's hand and keep turning it like he was using a meat grinder. The handcuff cut deeply into Mr. Huang's wrist. In just a few days, the wounds festered. Even today, more than six years later, there is still a visible mark on Mr. Huang's wrist.

Mr. Huang was rushed to the hospital on September 20, 2012, and his doctors issued a notice that he was in critical condition. The local court sentenced him to prison six days later. 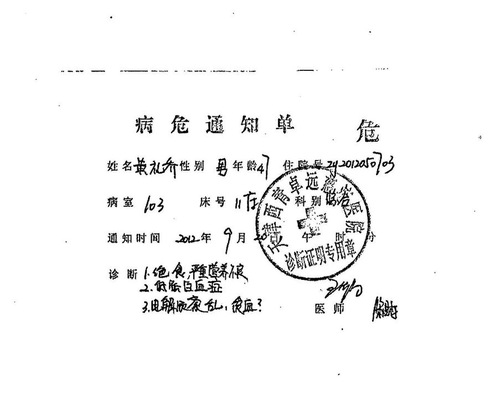 On September 28, 2012, he was sent to a division in Xiqing Prison specifically designed to hold inmates with Tuberculosis. Mr. Huang was later moved to Binhai Prison.

The guards there tied him to a bed spread-eagle before beating his stomach and legs for 30 minutes. They then untied him and cuffed his hands. They proceeded to hang him up to a window seam by his handcuffs. By then, he had lost consciousness. He later came to and saw himself lying on the ground. The guards gave him another round of beatings, and he coughed up a lot of blood as a result.

Tianjin Man Finally Gets to Appeal His Case, Five Years into a 7-Year Term

Tianjin Engineer Sentenced to Seven Years in Prison, Wife Not Allowed to Visit

42-Year-Old Engineer Pushed into Courtroom in a Wheelchair

An Engineer Falun Gong Practitioner Who Was Reduced to Delivering Water after Being Persecuted, Appeals in Tianjin City, China

“Four Hunan Women Given Heavy Prison Sentences for Their Faith”