(Minghui.org) A 71-year-old veteran in Gaizhou City has died, five years after suffering a stroke and becoming paralyzed while serving time for his faith.

Mr. Li credited Falun Gong for enabling him to quit drinking and recover from a slipped disc and severe stomach problems. His wife, Ms. Sun Qinghua, and their son, Mr. Li Guang, also took up the practice after witnessing Mr. Li's positive changes.

The family's pursuit of health and inner happiness, however, landed them in police custody multiple times. The elder Mr. Li was first arrested in 2001 and given 1.5 years of forced labor. Not long after his release, on January 29, 2003, he, his wife, and their son were arrested together and sentenced to prison months later. Mr. Li Decheng was given 7.5 years, Ms. Sun Qinghua 7 years, and their son 8 years.

The family was reunited in late 2009 when they were released from prison. The younger Mr. Li got married and had a baby boy. Their peaceful life didn't last long though.

The elder Mr. Li was arrested again on October 12, 2011 and was soon sentenced to six years in prison. He was subjected to various forms of abuse at Nanguanling Prison in Dalian City. On November 17, 2012, he had a brain hemorrhage and went into a coma. He was rushed to hospital with his hands still handcuffed. The handcuffs were never taken off until he was released on medical parole on January 17, 2013.

The prison was willing to release Mr. Li before his term was up only because the doctors had said that he had only a few days to live. His family initially took him to a local hospital, but they had to bring him home because they couldn't afford the medical expenses, which the prison refused to cover.

The left side of Mr. Li's face and body was paralyzed, and he was blind in his left eye when he was released. His condition kept worsening, and he eventually became completely disabled and required round-the-clock care. He remained bedridden and had to be fed through a nasal tube. 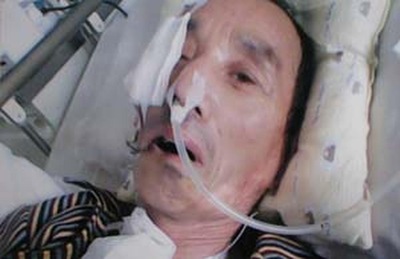 Mr. Li's condition became critical on March 22, 2018 and he was rushed to the hospital. He died hours later.

Mr. Li's son was arrested on October 30, 2012 for trying to visit his imprisoned father. The younger man was sentenced to 4 years in prison in early 2013. His family breathed a sigh when he was released in 2016, but they were heartbroken to lose their father a year later.

The Persecution Separate the Family of Mr. Li Decheng, a Practitioner in Gaizhou City, Liaoning Province

Mr. Li Decheng Tortured to Near Death; His Son Arrested

“Quitting the CCP on the Streets of Hong Kong”

“A Message from the Husband of a Falun Dafa Practitioner”