(Minghui.org) Mr. Li Decheng is a 67-year-old Falun Gong practitioner in Gaizhou City, Liaoning Province. Mr. Li nearly died during the Chinese New Year after being imprisoned at Nanguanling Prison of Dalian City. After two months of emergency treatment, his life was saved, but he is now disabled as a result of the persecution. 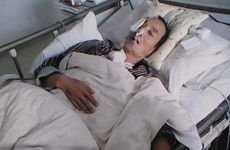 Mr. Li Decheng, disabled as a result of persecution in detention

Mr. Li's wife and younger son have been taking care of him while he has been in the hospital over the past four months. His older son, Li Guang, also a Falun Gong practitioner, is imprisoned in Bayuquan Detention Center. His father-in-law, who is in his nineties, had to be sent to a nursing home because no one was left at home to take care of him.

Over the course of the persecution of Falun Gong, Mr. Li Decheng has been imprisoned three times for a total of 10 years.

In 2001, Mr. Li Decheng was thrown into a forced labor camp for 18 months by officers from the Haicheng City Police Department of Liaoning Province. He was persecuted terribly in Anshan Forced Labor Camp.

The persecution did not stop after Mr. Li was released, and the local police continued to harass and threaten him.

Due to the extreme pressure, he and his family had to move. On January 29, 2003, Mr. Li and his entire family were illegally arrested by police officers from the Bayuquan Domestic Security Division of Yingkou. Mr. Li's father-in-law and younger son were released after a few hours because they do not practice Falun Gong. However, Mr. Li Decheng, his wife and older son Li Guang were severely persecuted in the Bayuquan Detention Center.

Mr. Li Decheng and his son Li Guang were frequently beaten, and Mr. Li temporarily lost his hearing and had difficulty thinking because of the severe beatings. Dr. Gao Rizheng at the detention center mixed unknown drugs into their meals and injected Mr. Li's wife with drugs that are known have the potential to cause brain damage.

After more than eight months of detention, the Li family were sentenced by Chief Justice Wang Yejia of the Bayuquan Court. Mr. Li Decheng was sentenced to seven years and six months in prison. His wife Sun Qinghua was sentenced to seven years and his son Li Guang to eight years. Their legal appeals were rejected by the Yingkou High Court. Mr. Li Decheng and his son were sent to Jinzhou Prison of Liaoning Province. Ms. Sun Qinghua was placed in the Women's Prison of Liaoning Province.

Mr. Li Decheng, his wife and their son were released at the end of 2009. The 2010 Chinese New Year was first new year their whole family could be together after years of persecution and suffering at the hands of the Chinese Communist Party (CCP). However, this peaceful time did not last long.

When Mr. Li Decheng was distributing flyers about the persecution of Falun Gong in Xiaogou Village on October 12, 2011, a villager named Cui Houtian reported him. Mr. Li was taken away by Gaizhou Domestic Security Division Director Mu Deqiang and Zhang Guanghai, the Director of the Dongcheng Police Station after they were notified by Xiangou Security Director Tai Shengyu and Wang Kexin, the CCP Secretary of the Xiaogou Brigade

Mr. Li was sentenced to six years in prison and taken to Nanguanling Prison of Dalian.

On November 17, 2012 Mr. Li was rushed to the emergency room. His brain stem was bleeding and he was dying. During the emergency rescue “treatment” his teeth were knocked out.

Despite his condition, Mr. Li was closely watched by three people every day and was kept shackled the entire time. He was temporarily released for medical treatment at a local hospital on January 17, 2013.

Mr. Li was no more than skin and bones. The left side of his face was shrunken, and he was blind in his left eye. He lost sensation on the right side of his body. He couldn't speak or eat. Even though he eventually regained consciousness, he cannot take care of himself.

The left side of Li Decheng's face is paralyzed and he is blind in his left eye. His leg was injured.

Mr. Li's family was also persecuted during his last imprisonment. His two sons went to visit him in prison on October 29, 2012, but they weren't allowed to see him. The next day, his older son Li Guang was arrested again and taken to the Bayuquan Detention Center. Wang Hongkui from the Bayuquan Domestic Security Division brought five or six police officers to Li Guang's home, searched it and confiscated two computers, Falun Gong books and other personal property.

Four agents from the Bayuquan Domestic Security Division broke into Li Guang's home again on November 8. They abducted his mother, Sun Qinghua, and his younger brother, threatened them, and did not release them until midnight.

Li Guang has been imprisoned since he was taken away. His family has been threatened and lied to by the Procuratorate, Public Security Department, the court, the Political and Legal Affairs Committee and the 610 Office.

The Bayuquan District Court tried Li Guang twice, on January 31 and on March 5, 2013. Li Guang and his attorney argued his innocence, stating that freedom of belief is protected by Chinese law, and that practicing Falun Gong is legal. Judge Luo Yihai and public procurator Zhang Xiaoli kept interrupting Mr. Li's attorney, claiming that they had to follow the orders of their superiors.

A happy and harmonious family was broken apart by the brutal persecution of Falun Gong. Even Mr. Li Decheng's father-in-law and younger son, who don't practice Falun Gong, have been arrested and persecuted.

With Mr. Li Decheng disabled and Li Guang imprisoned, the women, the elderly and the children were left with no protection and no income. Li Guan's wife couldn't continue to manage the fabric store and had to sell it. She has to take her young child with her to visit related offices in order to rescue her husband. 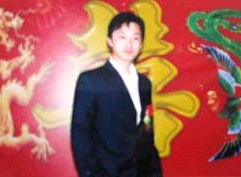 Li Guang at his wedding 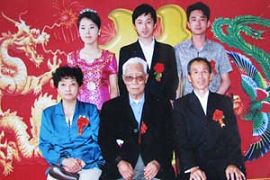 For further information about the persecution of Mr. Li's family, please read: