(Minghui.org) According to data compiled by Minghui.org, at least 38 Falun Gong practitioners held in Gansu Women's Prison for their faith have suffered severe beatings and torture since 2006. Many of them became disabled, disfigured, or lost vision or hearing shortly after being taken to this prison.

More than half of the practitioners were in their 50s and 60s. They represent a wide range of occupations, including factory workers, government employees, teachers, and bank employees. Their sentences range from 3 to 12 years, with an average of 5.2 years. 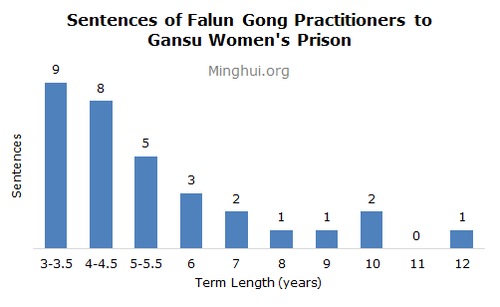 The prison set up a “Transformation Division” in 2006. Practitioners in other wards who resisted "transformation” (being forced to renounce their faith) were transferred here and tortured as part of the brainwashing process.

In the “Transformation Division,” prison guards specifically selected about two dozen felons out of the 1,800 inmates to torture the practitioners. Those who relentlessly abuse the practitioners would receive reward points and reduction in their sentences.

The practitioners were beaten, forced to go through brainwashing sessions, monitored around the clock, deprived of sleep or restroom use, and otherwise tortured.

In particular, Ms. Lu Guiqin became blind and unconscious less than a year after she was taken to the prison. Ms. Lu Guihua became hunchbacked and incontinent a few months into her sentence. Ms. Han Zhongcui lost mobility in her limbs and most of her vision within a year.

Ms. Zhao Cuilan, in her 60s, often had black eyes and a bloody nose from the beatings. Several of her teeth became loose.

Ms. Yan Ping once protested the abuse by shouting out, “Falun Dafa is good!” An inmate reached inside Ms. Yan's mouth and dug out flesh and blood from the inside of her cheek. The same inmate once kicked Ms. Yan in the groin with leather boots, causing severe pain and inflammation. She had difficulty walking and sitting for a long time.

Ms. Han Zhongcui lost partial feeling in her feet due to the beatings. She had to stand with her feet apart to keep her balance. An inmate kicked her in the leg repeatedly, which became badly swollen and covered with bruises.

The inmate also stabbed Ms. Han's hands with a sharp pen. Her hands were covered with holes and swollen.

The beatings often take place inside the restrooms, where there are no surveillance cameras. Inmates often submerged practitioners' heads into the water tank or even the toilet bowl several times, until the victims lost consciousness.

Ms. Wang Ruilin and Ms. Zhang Xiaoming, both in their 50s, were once forced to do handstands for nearly two hours. The inmates watched them closely–if they fell down, they would be kicked hard in the groin. Ms. Wang had high blood pressure and vomited at the end of the torture, triggering another round of beatings. Because Ms. Wang continued to vomit several days after the torture, inmates deprived her of meals.

Another commonly used torture at Gansu Women's Prison was to deprive a practitioner's basic everyday needs, such as eating, sleeping, using the restroom, and doing laundry.

Ms. Li Ya recalled that inmates sometimes didn't allow her to eat, yet sometimes over-fed her. The inmates would humiliate her by forcing her to eat inside the restroom.

Ms. Zhao Changju recalled that for three years, inmates restricted her restroom use and often didn't allow her to sleep. The longest she was kept awake was ten days. In addition, she was allowed to do laundry only three times in one year, including undergarments.

In the case of Ms. Zhao Cuilan, who was in her 70s, inmates would beat or insult her if she used the restroom more than twice each night. They sometimes forced her to stand overnight and didn't allow her to use the restroom. If she wet her pants, they didn't allow her to wash or change it. Ms. Zhao later developed Alzheimer's under the physical and mental torture.

Sometimes, the inmates poured water onto the practitioners' beds and forced them to sleep in a wet bed, especially during the winter with no heat.

Ms. Ta Junrong was once dragged out while using the restroom. Inmates tore off her clothes and humiliated her in front of a crowd. Ms. Ta started having nightmares and frequently waking up in tears after this ordeal.

The inmates once forced 58-year-old Ms. Jin Junmei to walk in the hallway without wearing her pants, while one inmate followed and videotaped her.

Prison officials used inmates as part of their efforts to force practitioners to renounce their faith. Practitioners were forced to watch propaganda videos each day, write “thought reports,” and recite prison regulations.

Some inmates wrote the name of the founder of Falun Gong on slips of paper and forced practitioners to step on them, sit on them, or put them into their underwear.

Most of the practitioners detained at Gansu Women's Prison were also made to do forced labor. Ms. Cao Fang once had to make 1,000 hats each day. She was often verbally abused by inmates for not being able to finish her quota. One month before Ms. Cao's term ended, the prison increased her workload by ordering her to pack up nearly 5,000 hats each day.

Below are two cases among many that highlight the brutality carried out at Gansu Women's Prison.

Teacher Disabled After Months of Torture

Ms. Lu Guihua, a kindergarten teacher, was healthy and energetic when she was taken to the prison in 2013. Inmates beat her every day, kicked her in the groin and stomach, and often shocked her with electric batons. She developed inflammation of her urethra and became incontinent. Her stomach pain also made her unable to eat well.

One inmate once kicked her from behind, causing her to hit her head on a concrete windowsill. She fell unconscious for a few hours, but was not given medical attention.

While she used the restroom, inmates dragged her out, stripped off her clothes, and beat her. They proceeded to stuff her mouth with a towel and pour ice-cold water on her.

After a few months of torture, her legs and back were severely injured. She could not stand straight and became crippled. She had a mental breakdown and was sent to a hospital. After she was taken back to the prison, she had difficulty walking and couldn't stand up after a fall. Yet, prison guards would strike her with an electric baton once she fell.

Electric Shocks and Other Torture

In addition to depriving Ms. Li Ya of sleep, denying her restroom use, submerging her head in a water tank, spitting phlegm on her, and forcing her to stand for extended periods of time, inmates also added drugged her drinking water to render her unconscious.

On a freezing day, inmates repeatedly poured cold water on Ms. Li's shoes and stomped on them to increase her pain.

A prison guard once shocked her with an electric baton on her chest, back, and around her neck, leaving scars all over her; in particular, there was a ring of scars about an inch wide on her neck.

Below is a list of practitioners known to have been incarcerated at this prison, and their term length(s):

Exposing Crimes at the Lanzhou Women's Jail in Gansu Province

Ms. Jin Junmei, a Woman With Disabilities, Beaten in Prison

Practitioner Han Zhongcui: The Police from Lanzhou, Gansu Province Have Severely Persecuted Me

“The Consequences of Not Truly Cultivating”