(Minghui.org) Ms. Mao Xiulan, 51, from Gangu County in Gansu Province, was sentenced to twelve years of imprisonment in August 2010. She was severely tortured in prison and sent for emergency treatment twice. She was released on medical parole in late 2012. Yet six months after her release, Gansu Women's Prison would not leave her alone, and sent officials to her home to harass her, and force her to write statements renouncing Falun Gong.

Ms. Mao Xiulan lives in Dashi Village, Dashi Township in Gangu County. She began practicing Falun Gong in 2004. Soon after taking up the practice, her illnesses, including heart disease, inflammation of the intestinal tract, sinus problems, swelling in her left leg, etc. vanished.

Ms. Mao conducted herself according to the principles of Truthfulness-Compassion-Forbearance. She was respectful and took care of her mother-in-law, who is in her eighties, by washing her face and hair, and cleaning up her soiled pants. She often helped families where the husbands were away making a living, leaving behind the wives as well as the elderly to cope with household chores and field work. Consequently she was well regarded by her neighbors.

Yet Ms. Mao was arrested at her home by police from Gangu County Domestic Security Division on January 28, 2010. They illegally arrested her because she often clarified the truth to people from various villages in Dashi Township. The police also accused her of spray painting utility poles on roads in the village with messages exposing the persecution of Falun Gong.

The Gangu County Court sentenced Ms. Mao to 12 years of imprisonment in August 2010. On September 7, she was taken to Gansu Province Women's Prison and tortured. She consequently had a heart attack twice, and in mid October she was sent to the hospital for emergency medical treatment. The prison told her family to be prepared for her death due to her critical condition. Ms. Mao was released on medical parole on December 7, 2012.

Even though she is now at home, she can be arrested and returned to prison at any time. On May 7, 2013, Lanzhou Women's Prison team heads Guo [given name unknown], Cao Jingui, a driver, as well as three officers from Dashi Police Station, forced their way into Ms. Mao's house. They tried to force her to write a statement promising to give up Falun Gong.

Five officers from Gangu County Police Department broke into Ms. Mao's house on January 28, 2010. They looted her computer, printer, and over 10,000 yuan in cash, and took her to the police department for interrogation. Wei Zhongmin, deputy head of the police department, grabbed her shirt collar and brutally beat her. That night, Ms. Mao was detained at the County Detention Center. The guards made her take off her shoes and walk into the prison cell barefoot. In the dark cell, she had nothing to eat but moldy buns, and rice infested with weevils. Due to the conditions and mistreatment, Ms. Mao became ill within a short period of time. She could no longer see things clearly, and her eyes were dry, yet kept tearing up.

Ms. Mao was taken to Gansu Women's Prison after being sentenced. The first day in prison, a guard started to interrogate her. When Ms. Mao told her the benefits gained from practicing Falun Gong, the guard made eye contact with a prison convict. That night, convicts Ma Guifang and Xian Deying ganged up on her, beat her, and tortured her the entire night. They later forced her to write a statement promising to stop practicing Falun Gong. She was forced to watch a video slandering Falun Gong and write “thought reports” every day. 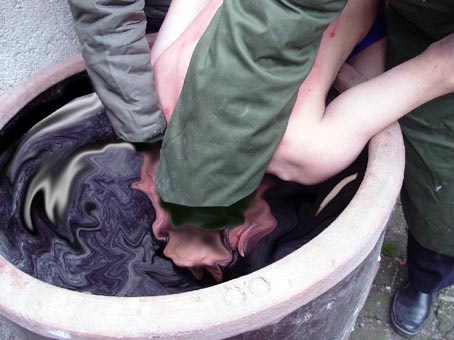 One day in October, prisoners Xian Deying, Liu Lingfang, Yang Jing, and Si Hua were ordered to monitor Ms. Mao. They took her to the toilet and started viciously beating her. When she screamed for help they stuffed her mouth with a cloth used to mop the floor, then grabbed her hair and submerged her head into a bucket of water. Her head was submerged in the water until she passed out and collapsed onto the ground. The four prisoners subsequently kicked her upper body, legs, and back, and slapped her hard about the face. Ms. Mao's face became swollen from the beatings, her whole body was shaking, and she suffered abnormal vaginal bleeding.

Practitioners were often beaten with batons, subjected to solitary confinement, and not given enough to eat or drink at Lanzhou Women's Prison. Ms. Mao consequently became weak and listless, she could not sleep at night, and her hair fell out and turned grey.

She became so weak that on one occasion she fell in the restroom and was knocked unconscious. The glass next to her was shattered and she landed on the broken glass. Her hands were cut and blood oozed out. A practitioner quickly called for someone to carry her. However convict Xian Deying forced Ms. Mao, who had regained her consciousness, to get up and walk on her own. With every step she took, she left a trail of blood behind. The prison hospital then hastily dressed her wounds, and nothing else was done about her injuries.

Convicts who were ordered to monitor Ms. Mao often forbade her from using the toilet. Xian Deying once drenched her with cold water, spit on her face, and hit her on the forehead until it became swollen, simply because she used the toilet.

One night, Ms. Mao's whole body was in pain, as she refrained from relieving herself. She could not stand straight, her back ached, and her ribs were in excruciating pain. The convicts monitoring her also forbade her from washing her clothes and brushing her teeth. As a result, all of her teeth loosened and bled. Three of her molar teeth rotted from the roots and fell out, and she now has difficulty chewing and eating.

On another occasion, prisoners kicked her hard in the lower back because her recitation of the prison rules was not “up to par.” As a result she was in such pain that she could not breathe or stand up.

Instigated by prison guards, the convicts tormented practitioners at will. They did not allow practitioners to look at, talk, or help each other, else they were beaten. One was even slapped in the face by a convict on duty for talking in her sleep. Zhang Xiaoming, a practitioner from Daxiangshan Town in Gangu County, ate a few soybeans because she was hungry. Prisoner Yang Jing subsequently stuffed her head into a small cabinet on the bed and tortured her for half a day.

Yang Jing grabbed practitioner Li Ya's hair and banged her head against the metal bed. Li Ya's entire body became covered with bruises as a result of the mistreatment. Xian Deying and Yang Jing once called Li Ya to the guard's office, and soon afterward Li Ya's heart-wrenching screams were heard coming from the office.

Five months after Ms. Mao was sent to prison, she developed symptoms including increased heart rate, high blood pressure, and chest pain, due to the mental and physical torture. Prison doctors examined her and determined that her condition was critical. Not wanting to be held responsible for her death, the prison allowed her release on medical parole after extorting 8000 yuan from her daughter. Ms. Mao returned home on December 7, 2012.

Ms. Mao's family fell apart after her arrest. Her husband Zhang Jinhu lay in bed for several months. There was no one to take care of her mother-in-law, who is in her eighties. She was very ill, she could not control her bowel movements, and the house was filthy. After more than a year of being tormented by her illness as well as hunger, the mother-in-law passed away in July 2011.

Ms. Mao's 16-year-old son Zhang Tuofeng was in secondary school when his mother was arrested. He was forced to quit school and go to work. He was bullied and looked down on by others.

Ms. Mao's youngest son Zhang Ruifeng was attending primary school. He was often ridiculed and humiliated by others. The boy became lonely and introverted at a young age. He does not talk to people and keeps his head lowered all the time. Yet, despite the family's difficult situation, local police do not leave them alone and frequently come to harass them and question Ms. Mao's husband and sons.

After Ms. Mao's release, a few hundred fellow villagers and relatives came to visit her at home. Many of them wept upon seeing her frail condition, and held her hand exclaiming, “Such a good person has been arrested and badly tortured. Is there any justice in this world?”