(Minghui.org) On the occasion of the 23rd anniversary of Falun Dafa's introduction to the public, Canadian government officials, including Prime Minister Stephen Harper, five federal ministers, and many lawmakers have sent letters of congratulations to the Canada Falun Dafa Association in honor of this special celebration.

Three more federal ministers--the Minister of Foreign Affairs, the Minister of Canadian Heritage and Official Languages, and the Minister of Transport--plus two other government officials also expressed their best wishes for the celebration.

They praised Falun Dafa practitioners for living by the core principles of Truthfulness-Compassion-Forbearance and for their contributions to Canadian society. They also saluted practitioners' courage and perseverance during the 16 years of persecution in China. 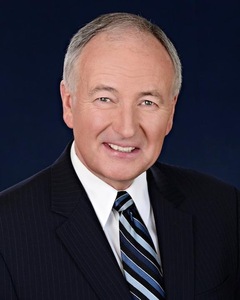 In his letter sent to the Falun Dafa Association of Canada on May 13, Minister Rob Nicholson extended his best wishes for “successful celebrations across Canada in 2015.” He commended Falun Dafa's guiding principles of Truthfulness-Compassion-Forbearance for its contribution to building “a vibrant Canadian society where communities of faith are both valued and free to practise their religion or beliefs.”

“I look forward to the many future celebrations in Canada commemorating the introduction of Falun Dafa,” he wrote. 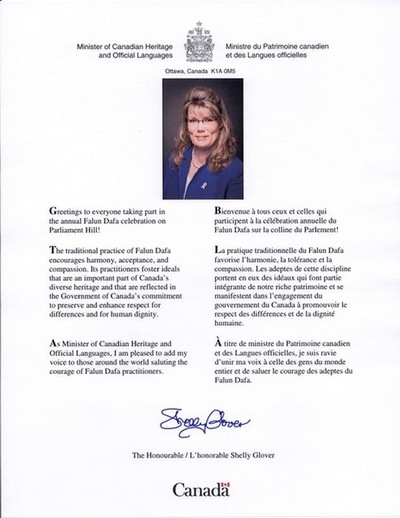 In her letter of congratulation, Shelly Glover, Minister of Canadian Heritage and Official Languages, extended her best wishes to everyone taking part in the annual Falun Dafa celebration on Parliament Hill.

MP Lisa Raitt, Minister of Transport, commended Falun Dafa practitioners in her letter: “Your efforts continue to serve as motivation to all of us that there should always be time made to promote good will and humanitarian acts of kindness.” 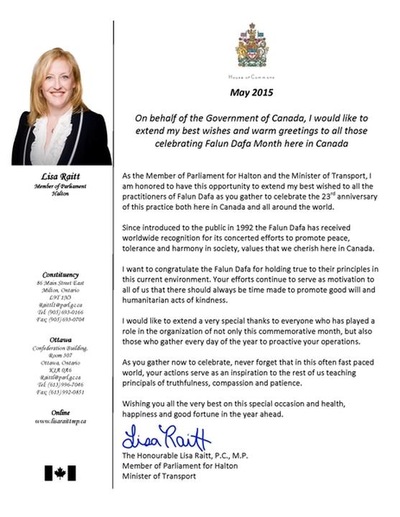 Letter of Congratulations from MP Lisa Raitt, Minister of Transport

MP Mark Adler for York Center praised Falun Dafa practitioners for persevering in Falun Dafa's core principles of Truthfulness-Compassion-Forbearance despite the 16 years of persecution in China. 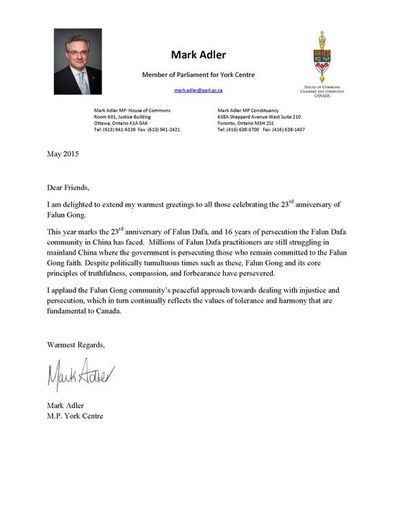 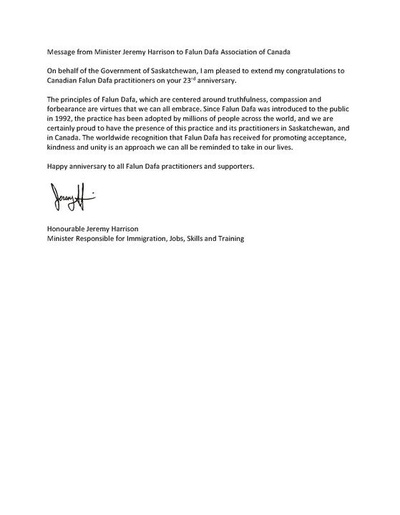 Jeremy Harrison, Minister Responsible for Immigration, Jobs, Skills and Training, is proud to have people practicing Falun Dafa in Saskatchewan and in Canada.