(Minghui.org) May 13, 2015 marks the 23rd World Falun Dafa Day, celebrating the anniversary of Falun Gong's introduction to the public. Five Canadian ministers sent congratulatory letters to the Falun Dafa Association of Canada. Besides the warm greetings on this joyful occasion, in their letters the ministers commended Falun Gong's teachings –Truthfulness, Compassion, Forbearance – and acknowledged Falun Gong's contributions to society.

Minister for Multiculturalism Jason Kenney said in his letter: “In Canada, Falun Dafa practitioners have contributed to the promotion of mutual respect and understanding, while also celebrating and sharing the richness of traditional Chinese culture through wonderful performances such as Shen Yun.” 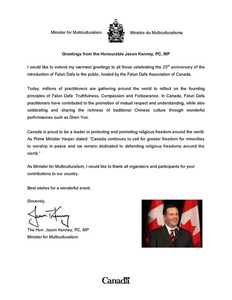 “..., the fundamental values of Falun Dafa are a wonderful complement to our Canadian way of life,” he said. 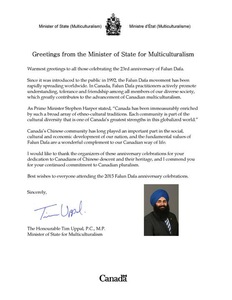 Letter from Minister of State for Multiculturalism, Tim Uppal

Minister of Citizenship and Immigration Chris Alexander congratulated practitioners on their “tremendous contributions towards Canada's success as a culturally rich democracy.”

He noted: “Falun Dafa's guiding principles of truth, benevolence and forbearance, strongly resonates with the fundamental principles upon which our communities are built, those of acceptance, tolerance, and understanding.” 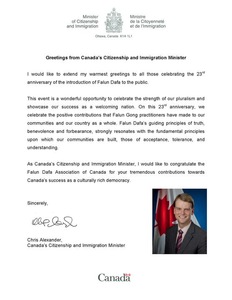 Congratulatory letter from Minister of Citizenship and Immigration, Chris Alexander

Minister of Labour and Minister of Status of Women Dr. K. Kellie Leitch recognized in her letter that “Falun Dafa practitioners actively promote fundamental values that contribute immensely to Canadians from coast to coast.” 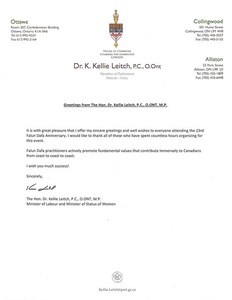 On behalf of Prime Minister Stephen Harper, Minister of Industry James Moore sent greetings to all those celebrating the Falun Dafa Day.

He said: “With an emphasis on truthfulness, compassion and forbearance, Falun Dafa is a source of inspiration for Canadians who seek peace at home and around the globe.”

He praised practitioners for their effort to “encourage others to seek understanding and tolerance,” and for their contribution to a multicultural society. 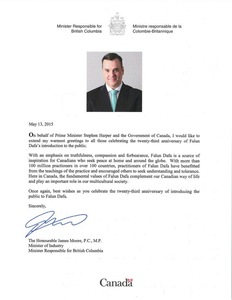 “Celebrating Falun Dafa Day at the University of Michigan”