(Minghui.org) After the atrocities in “re-education through labor” (RTL) camps came to light over the years and captured attention worldwide, China announced the abolishment of its labor camp system in 2013. However, Amnesty International raised concerns that the move constituted no more than a “cosmetic change,” and that the same policy of persecution and violent oppression persists in other forms, sometimes resulting in prisoners' deaths.

Having learned from the labor camp experience, the Chinese regime has adopted a policy of not letting a given black jail gain too much notoriety, lest it again become the subject of international scrutiny.

When such a facility becomes too well-known, it disappears, only to re-emerge somewhere else to continue its role in carrying out the persecution of Falun Gong. Of course, these black jails, new and old, are staffed with personnel from the closed labor camps.

This March, four rights lawyers were beaten and tortured by police for seeking the release of Falun Gong practitioners detained in a black jail in Heilongjiang Province. The incident focused international attention on the Chinese regime's system of extralegal brainwashing facilities. True to form, the “Jiansanjiang Farm Legal Education Center” involved in the March lawyer case was shut down on April 28. However, Falun Gong practitioners detained there continued to be held without due process. [1]

Temporary brainwashing centers have also appeared in more clandestine locations. In Jilin Province, the Meihekou City 610 Office set up a brainwashing center in Shuangxing Middle School, where around ten practitioners have been detained as of July 1. Another report from June tells of a brainwashing class held in a hotel in Jiangsu Province. 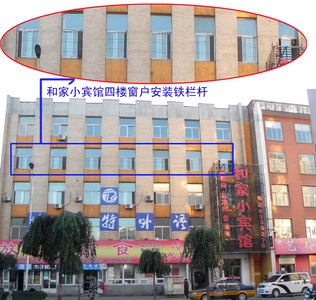 Hejia Hotel is located in an alley across from Jingyu Middle School in Tonghua City, Jilin Province. Since 2001, multiple brainwashing sessions have been run on the 4th floor, where iron bars are installed, as seen in the above picture.

As the primary operators of brainwashing centers, local “610 Offices” are part of a gestapo-like agency created specifically to coordinate arrests, detentions, and “transformation” of Falun Gong practitioners. To carry out that task, it is empowered to override judicial systems and police forces in the country.

In the Jiangjin District of Chongqing, several brainwashing centers have been set up in rental houses, including one located on the ground floor of a building at the Jindudingyuan Condominium Complex since 2010. As is typical in brainwashing centers, each room (cell) holds one practitioner and two “monitors” responsible for watching the practitioner around the clock. These monitors are usually “transformed” practitioners, who are made to cooperate with guards in the transformation of other practitioners.

In addition to physical and psychological torture in brainwashing centers, reports regularly allege forced injections of nerve-damaging psychiatric drugs, force-feeding of drugged food, and even involvement in organ harvesting from living prisoners.

These cases of torture and psychiatric experimentation have been corroborated by the 2014 Annual Report published by the United States Commission on International Religious Freedom.

A month after the persecution began in 1999, the General Office of the Central Committee of the Chinese Communist Party declared “transformation of Falun Gong practitioners” a key component of the Party's “war against Falun Gong.”

Despite the regime's recent attempts to polish its image, its human rights abuses have not abated; the same prisoners of conscience have simply been moved from official labor camps to hidden black jails, with less oversight and more deniability.

As long as the regime's core policy of violent repression has not changed, no amount of euphemisms and superficial promises can bring about true improvement.

“A Falun Dafa Supporter Becomes the Head of Our Village”