(Minghui.org) The persecution of Falun Gong is ongoing, despite the much-touted dismantling of the forced labor camp system in China. The Chinese Communist Party (CCP) continues its brutal repression by ordering police, prosecutors, judicial system staff, and local officials to continue with the same policies of arbitrary arrest, detention, and brainwashing. The same physical and spiritual torture methods, designed to force practitioners to renounce their beliefs, continue to be employed in brainwashing centers in Jiangjin District of Chongqing.

The Jiangjin District 610 Office has confirmed to upper level officials its goal to “transform” 200 practitioners, or all local practitioners under the age of 80. 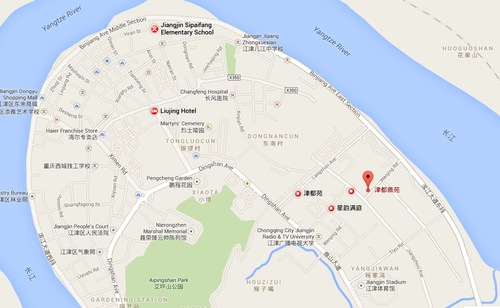 Current location of Jiangjin District Brainwashing Center, which had multiple locations prior to 2010. (Source: Minghui.org and Google Maps)

Over a Decade of Persecution in Jiangjin District Brainwashing Centers

Ms. Zhao was detained in Wangxiangtai Brainwashing Center for a total of three days the first time and was charged 120 yuan (about $20) per day for living costs. She was later detained for more than 20 days in Aipingshan Brainwashing Center, and released after the authorities extorted 2,000 yuan (about $328). Because her son is a lawyer, Ms. Zhao is being closely monitored by local officials and police.

Ms. Zeng Fanshu, a teacher at Xiangtang Middle School, in Shuangfu Township, Jiangjin, died as a result of torture in Dongmen Brainwashing Center on January 25, 2001. Her daughter was only nine years old at the time.

Ms. Zhao Kairong was detained in a brainwashing center for more than a month, during which time the center staff placed nerve-damaging drugs in her food. Ms. Li Yuanqi, a primary school teacher, was detained in a brainwashing center above the Jiangjin Slaughter House for seven months in 2002-2003. During her incarceration, she had 5,500 yuan (about $902) illegally deducted from her salary.

Mr. Huang Chaosheng, an employee at the 3533 Plant, was abducted on June 10, 2004 by a group of people including state security agent Gao Baoxiong, plant security staff person Liu Guangfu, and police officer Yi Zhihua from the Jijiang Police Substation.

Mr. Huang was detained in a Jiangjin brainwashing center for 15 days and released after the authorities extorted the equivalent of $10 per day. He was dismissed from his job at the plant. Mr. Huang was close to retirement, having worked there for 37 years. His wife Gu Quanrong was also illegally arrested and fired from her job. She was detained for seven months and later sentenced to three years in prison with a four-year suspension.

There are still many undocumented cases of persecution. The Jiangjin 610 Office has extorted more than $16,500 from Falun Gong practitioners over several years of persecution.

Several brainwashing centers had been set up in rental houses in Jiangjin District prior to 2009. There was a location at Aipingshan during the first half of 2009. 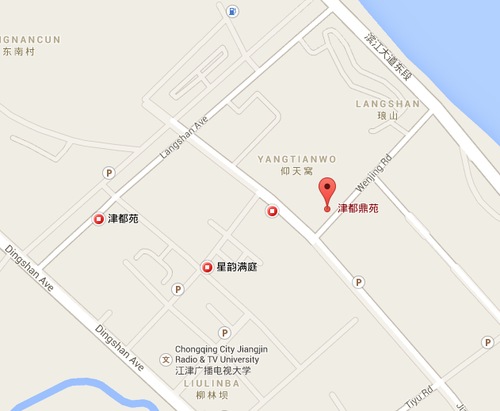 The brainwashing center has, since 2010, been located on the ground floor of a building at the Jindudingyuan Condominium Complex. The unit is about 130 square meters (about 1,400 square feet) with three bedrooms, one living room, a kitchen, and a bathroom. One bedroom is used as the office and two bedrooms are used as confinement rooms where Falun Gong practitioners are pressured to renounce their beliefs.

Practitioners are frequently cursed at and beaten in the brainwashing center. Nerve-damaging drugs are frequently put into practitioners' food. Practitioners are also deprived of food at times. They are at the mercy of the doorkeepers, who sometimes don't allow them to go to the restroom at night. They instead have to use a small container beside each bed, which is emptied the next day.

Chen Qiang (陈强), male, member of the Jiangjin Political and Law Committee. He has participated in almost all ransacking of Falun Gong practitioners' homes: +86-13668019129 (mobile)

Liu Zenghuai (刘增怀), female, director of the Jijiang Neighborhood Administrative Office. She is specifically engaged in the persecution of Falun Gong. She patrolled the farmer's market in the summer of 2013 to identify Falun Gong practitioners who were talking to people there. As a result, three practitioners were arrested and detained for days before being transferred to the brainwashing center. Liu is also involved in monitoring Falun Gong practitioners in the neighborhood: +86-023-47927559

“Be Careful When Using the Falun Emblem on Holiday Greeting Cards”