The arrest took place at the intersection of Main Street and Kissena Boulevard at 11:55 a.m. According to police, 32-year-old Buqiu Zheng lives in Flushing. The police had issued a warrant before his arrest. 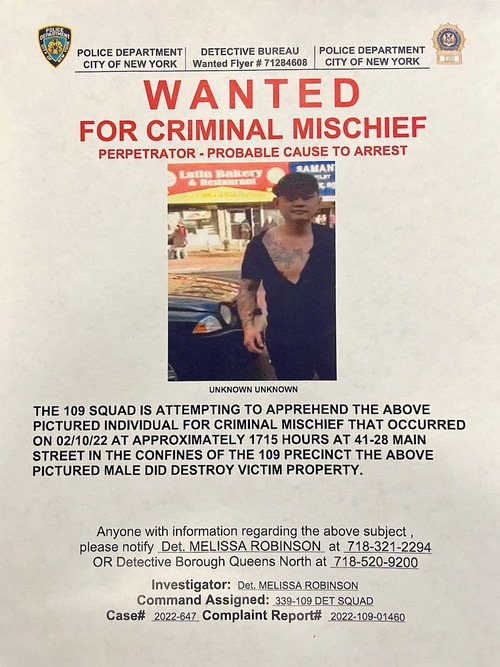 Zheng appeared in the Queens Criminal Court on February 16. An assistant district attorney presented to judge Laurie Peterson that Zheng turned over the table at a Falun Gong booth and said to Falun Gong practitioners there, “Your religion and faith is not good.” He then damaged informational materials, a music player, and several other items.

Zheng’s next court date was set for March 30 and he was conditionally released. The conditions included no additional arrest and no getting close to Falun Gong booths. Zheng accepted the terms by replying “I know” and “understood” in Chinese in the court.

Yi Rong from the New York Falun Dafa Association thanked the police for their prompt action which resulted in the successful apprehension of the suspect. She said, “This is a big help to protect the safety of our community and safeguard the freedom of belief. This will provide a safe environment for volunteers and the rest of the local residents. We at the Falun Gong booths will continue contributing toward a better community.”

Falun Gong practitioners have five booths in Flushing where they promote the practice and expose the brutal persecution of Falun Gong by the Chinese Communist Party (CCP) in China. The booths are located at the local library, the subway station, Golden Shopping Mall, the post office, and the Flushing Landmark Building. The booth outside the library has been in operation for about 20 years, while the others were set up after violent attacks by CCP mobsters in 2008. Rain or shine, practitioners have never stopped manning the booths to share the goodness of Falun Gong to passersby and inform them of the CCP’s harsh suppression of Falun Gong in China. Many Chinese people who heard the facts became supportive of Falun Gong and have quit the CCP and its two subsidiary youth organizations.

A little after 3 p.m. on February 10, a Chinese man wearing a short-sleeved shirt that revealed numerous tattoos on his arms and chest attacked the Falun Gong booth at the library. He tore down a poster before he was stopped by volunteers. He next went to the Golden Shopping Mall booth, where he punched the posters and kicked a table with Falun Gong materials, overturning the table and spilling the materials. Zheng stomped on a poster, ripped up a number of brochures, and then left, dragging away the damaged posters. By then, the booth had been totally destroyed.

At the time of the attack, 67-year-old Ms. Xu Weiguo was the only volunteer at the booth. “I don’t know this person and we are not enemies,” Ms. Xu said, “but the attack was frightening. What kind of hatred [would prompt someone to do that]?” 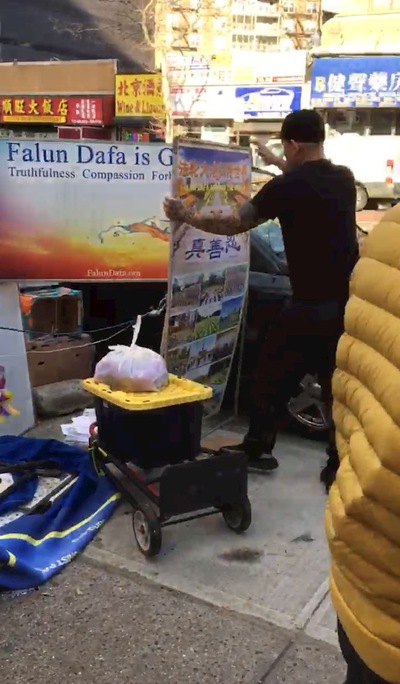 Although the news media published a photo and video of the attack, Zheng continued targeting the Falun Gong booths. According to Falun Gong volunteer Sun Hong, Zheng arrived at the booth at the Flushing Landmark Building in the afternoon of February 11. As he kicked the table with Falun Gong materials, volunteers stopped him. He then went back to the library booth to inflict further damage. After volunteers called the police, Zheng escaped. “Please call the police as soon as this person appears again,” an officer said to volunteer Ms. Zhou.

Zheng came to the booth at the library on February 14, and again kicked the table with Falun Gong materials. After practitioners reported the affront to the police, an officer said that an investigation had been opened for the violent attacks on February 10. The police had obtained a video of the attack and pictures of the suspect, plus several testimonies from witnesses. The police said that as soon as this person was located, he would be arrested and charged. In the meantime, the police increased surveillance near the five booths as a means of protection.

At 10:49 a.m., Zheng arrived at the library booth. According to volunteer Lily, he kicked over the table and dumped hand-made paper lotus flowers on the ground. The volunteers were able to stop him after he attempted to tear down the posters, and he left abruptly.

Falun Gong practitioners immediately reported the attack to the police. Officers from the NYPD 109th Precinct soon arrived and inquired about the incident. They then patrolled the area in a police van. At 11:55 a.m., they located the suspect nearby, at the junction of Main Street and Kissena Boulevard, and arrested him.

Similar to previous attacks on Falun Gong practitioners, evidence points to a CCP connection. Regarding the attack on February 10, volunteer Ms. Xu said she did not know the suspect or have any known conflict with him. Zheng, on the other hand, seemed to have come with intent to damage the booth.

Furthermore, Li Huahong, a CCP operative who has attacked Falun Gong booths in the past, was also present at the scene. Li has been arrested three times since 2008 for attacks and harassment. He was also convicted of personal assault in 2013. According to insiders, Li is from Tianjin, China and has received funding from both the CCP’s Political and Legal Affairs Committee (PLAC) as well as the 610 Office, two agencies tasked with overseeing the persecution of Falun Gong in China.

Li spread the CCP’s defamatory lies about Falun Gong in New York and often attacked Falun Gong booths. After Zheng recently damaged the booths, Li, who was also on the scene, gloated over the damage and said to volunteers, “Why are you taking a picture of me? I didn’t do anything!” Then he laughed and said, “Go ahead and call the police. Will you?”

Ms. Xu said that someone else may have worked with Zheng during the incidents. After destroying the booths, Zheng dragged away the damaged posters. But when she checked nearby dumpsters, Ms. Xu did not find the posters discarded there. It is likely that others coordinated with Zheng at the time to move them elsewhere.

After the attacks took place, Democratic District Leader Martha Flores-Vazquez held a rally in front of the Flushing library on February 13, a snowy day, to condemn violence against faith groups. She hoped officials, the police, and the District Attorney would pay attention to this hate crime and violation of religious freedom so that the criminals would be arrested and held accountable.

Falun Gong is a peaceful group that promotes traditional Chinese culture. During the Chinese New Year Parade in Flushing on February 5, their colorful outfits, energy, and spirit were an inspirational part of the event. The local community has welcomed Falun Gong practitioners, respects their freedom of belief, and is committed to helping ensure their safety.

During the rally, officers from NYPD’s 109th Precinct came out to protect the rally participants. Ms. Flores-Vazquez thanked them for their efforts and called on residents to join together for the future of the community.

A Threat to Society

Bai Jiemin, Vice President of the Chinese Democracy & Human Rights Alliance (CDHRA), condemned the crime and demanded legal action against the criminal for the safety of Flushing. He said that freedom of belief is well respected and the popularity of Falun Gong shows it is well accepted by the general public. He remarked that some people are afraid when Falun Gong practitioners expose the CCP’s crimes. Video and testimonies from witnesses showed that Zheng kicked down posters with the words “Truthfulness, Compassion, Forbearance.” “When a person dislikes these principles, what kind of a person would he be then?” questioned Mr. Bai.

Bai also said that by engaging in these attacks, the mobster is challenging the law and order of American society. He said that it endangers the national security of the country and violates the U.S. Constitution. “This crime is not only against Falun Gong, but every member of our society,” Mr. Bai said.

The violent attacks on the Falun Gong booths also triggered the anger of passersby. Some took videos and posted them on social media. After seeing the videos, several local residents came out to show their support for practitioners. Ms. Xie, a volunteer at the Flushing Landmark Building booth, said that a woman in her 60s came to her on the morning of February 11 and told her, “Don’t worry. We all support you and those mobsters are bad.”

Ye Ning, a human rights lawyer in New York, said the crime was serious although it appeared simply as property damage on the surface. “Similar to arson at a church, it is a hate crime and aims to stop the freedom of belief,” he explained.

He said he felt pity for the mobsters who risked destroying their own lives in exchange for a small bit of material gain from the CCP. The mobsters have the clear goal of damaging Falun Gong booths in broad daylight. Such violence against Truthfulness-Compassion-Forbearance is a hate crime, Mr. Ye said. A hate crime can be considered a federal crime, with a sentence of 5 years or higher.

Ye noted that these attacks happened right after the Chinese New Year, and wondered whether Falun Gong practitioners’ success in the New Year’s parade touched a nerve within the CCP’s intelligence agencies. By “achieving such an outcome,” they could boast of their “accomplishments” in attacking Falun Gong and possibly secure more funding from the CCP.

William Lin, an immigrant from Hong Kong, passed by the February 13 gathering and stopped to watch the rally. He said that what Falun Gong practitioners have done is good for society. “It is shameless that some people got a bit of money from the CCP and follow the regime blindly,” he said. “Only by arresting or even deporting them can we live in a safe society.”