(Minghui.org) Falun Dafa practitioners participated in the Chinese New Year parade in Flushing, New York, on February 5, 2022. This parade is the largest event of its kind on the U.S. east coast. Spectators expressed their admiration for the variety and meaning in the Falun Dafa contingent. 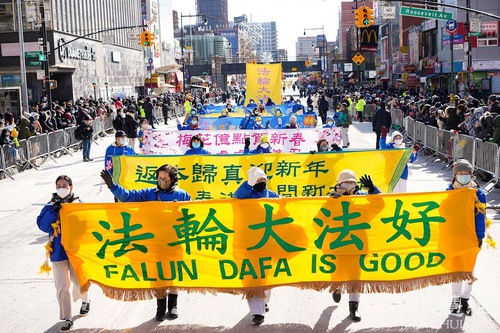 Practitioners in New York participated in the Chinese New Year Parade in Flushing. 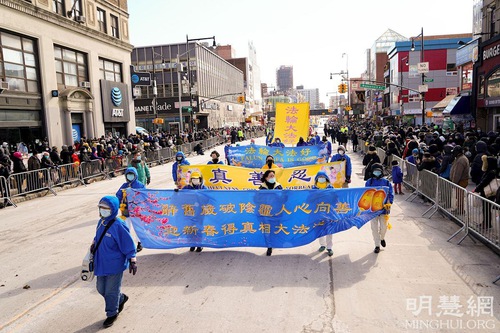 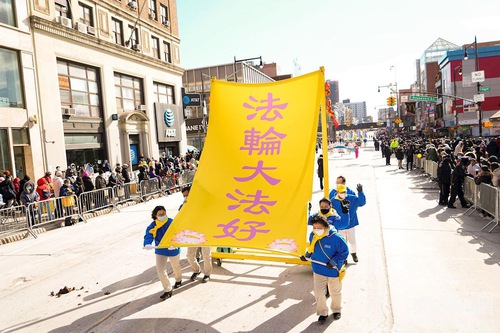 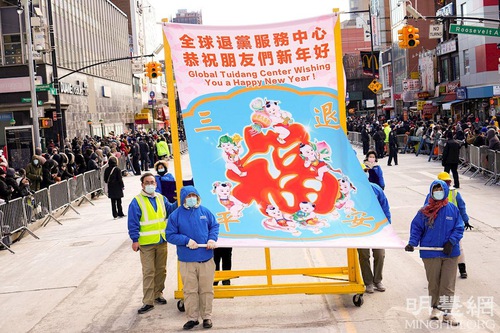 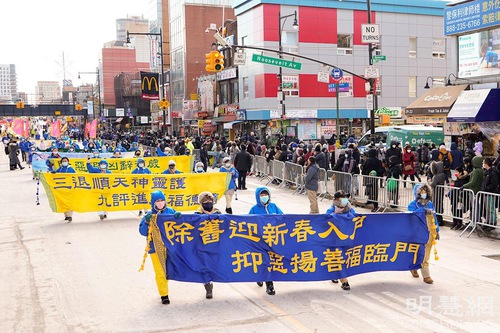 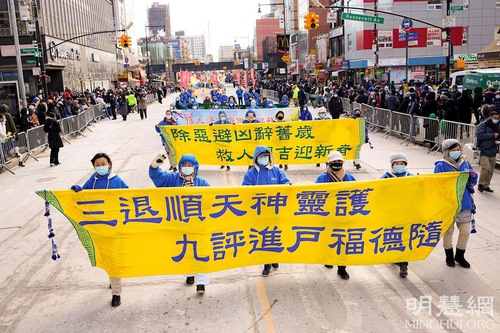 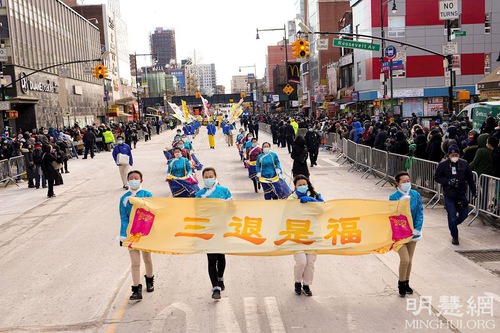 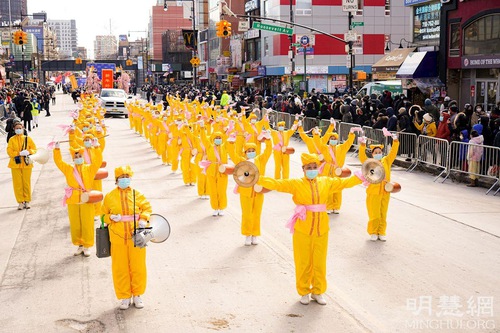 Banners and waist drums in the parade

Yi Rong from the Falun Dafa Association said practitioners were always happy to celebrate this traditional holiday with the community. “We also bring the best wishes to local residents for their health and safety,” she said. “By introducing Falun Dafa along with its mental and physical benefits, we are helping the community to clearly understand the Chinese Communist Party’s (CCP) brutality and hope they reject the regime and quit the CCP for a better future.” 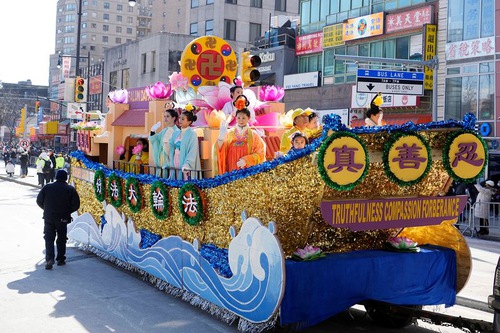 The practitioners’ entry was led by a float that read “Truthfulness, Compassion, Forbearance” on the front and “Falun Dafa” on the side. The float was decorated with pink lotus flowers and a golden Falun (law wheel). Young practitioners dressed in traditional costumes on the float waved to spectators and wished them well. 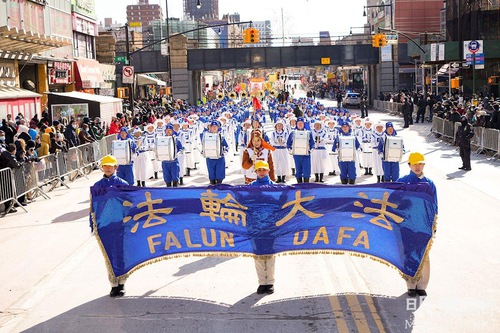 Following the float was the Tian Guo Marching Band composed of about 100 members. Playing instruments ranging from brass to woodwinds, drums, and cymbals, practitioners performed several melodies including “Falun Dafa Is Good,” “Bringing You Blessings,” “Sacred Song,” and others. 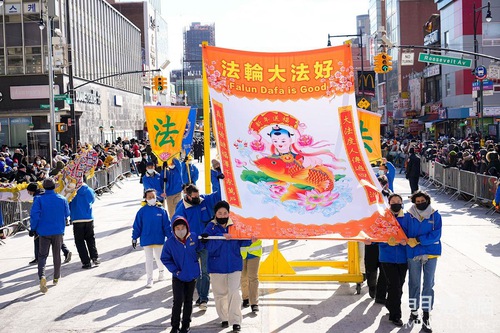 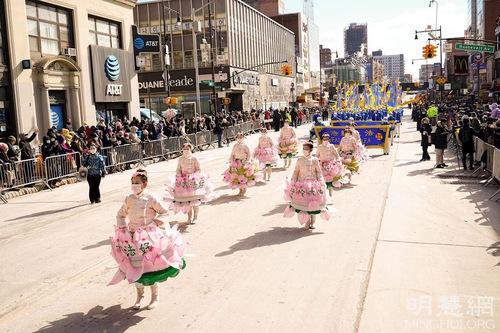 Lotus dance group. Rising from the mud with purity and dignity, lotus flowers are often used by cultivators to show their aspiration to improve and refine their moral character.

Scott Chinn, the leader of the dragon dance, said he was happy to participate in the parade and share Chinese traditional culture with Western society. He is also grateful because Falun Dafa shows what authentic Chinese culture is.

Chuck Schumer, U.S. Senate Majority Leader, accepted a handmade paper lotus flower with the words Truthfulness-Compassion-Forbearance attached to it. He thanked practitioners for participating in the event and wished them well.

Practitioners’ performances were warmly applauded. “I like this group the best,” one resident remarked. “They keep getting better year after year.” Another person said, “Great layout. Very neat and beautiful!”

Community leader Zhou Guodong said the practitioners’ performances are “impressive” and “magnificent.”.Wu Shaoping, a lawyer who recently immigrated to the U.S., said he liked the Falun Dafa entry the most. “Of all groups, they are the largest, most spectacular, most fascinating, and most disciplined,” he said. He was impressed by practitioners’ determination in their faith despite the pandemic and ongoing suppression of the practice in China.

Roger Guan from Flushing said that the principles of Truthfulness-Compassion-Forbearance are most precious because they represent the traditional values in China. “They are important for our community, for the United States, and for our world,” he added.

Chen immigrated to the U.S. five years ago and was excited to see Falun Dafa practitioners again in the parade. “These principles represent the root of our culture and that is why so many people practice it,” he said.

Liao Deming, an artist who watched the parade, applauded the Falun Dafa contingent. “They are the best and largest group in our community,” he noted. “The principles of Truthfulness-Compassion-Forbearance are something we should all cherish.”

Mr. and Mrs. Bibb took lots of photos of practitioners as they marched past. Mrs. Bibb also took a group photo with the dragon dance group. “I have met practitioners outside the United Nations Headquarters in the past and I know what is going on,” said Mr. Bibb. “Falun Dafa is good. Truthfulness-Compassion-Forbearance is good!”

“The Story Behind a Fast-Changing COVID-19 Test Result”