(Minghui.org) Located in a northwestern suburb of Shenyang, Liaoning Women's Prison is part of a massive prison complex. The complex cost 500 million yuan (about $80 million) to build out its 330 acres. It is the only women's prison in Liaoning Province.

About one-tenth of its detainees are Falun Gong practitioners, all of whom were illegally sentenced for their beliefs. [1] Hundreds have suffered from various forms of torture there, and the prison is one of the most notorious in the country for abuse leading to death. [2]

Since the persecution against Falun Gong began 15 years ago, government officials in Liaoning Province have adhered closely to the Chinese Communist Party's (CCP) policy of persecution—so much so that the number of practitioners persecuted to death in Liaoning ranks among the top 5 in China's 23 provinces. [3] 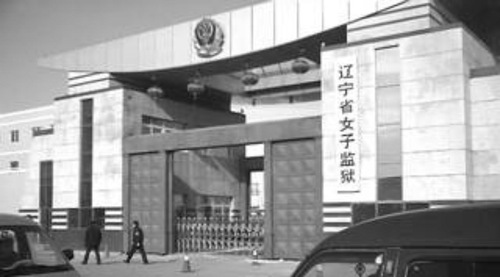 During an upgrade funded by the provincial government, the prison complex was relocated to Baixintai Village, Pingluo Town, Yuhong District of Shenyang. [3]

Liaoning Women's Prison has 11 wards, each with several teams, and Falun Gong practitioners are spread throughout each team. Each team has about 20 guards, which means that over 200 guards are involved in the direct persecution of practitioners there. [6]

In 2005, the provincial government provided additional funding to build a hospital—essentially a separate center to carry out the persecution. [7]

The CCP recast the forced labor system at the end 2013. At that point, the notorious Masanjia Forced Labor Camp morphed into a new ward of Liaoning Women's Prison, where the same staff continued the same tactics in the same exact facility. [8]

According to a previous Minghui report, at least 84 practitioners were still detained at Liaoning Women's Prison as of May 2014. [9]

Established in 2010, the “Correction Center” [10] inside the prison hospital was turned into a more centralized place to persecute Falun Gong practitioners—including newcomers and those who have remained steadfast in their beliefs.

There, inmates are ordered by prison guards to monitor practitioners around the clock and “transform them using all means possible.” There, each practitioner is detained in a separate room with padded walls.

In addition to the torture and brainwashing, Falun Gong practitioners have also become the prison's forced laborers—making clothes, textiles, and handcrafts for both domestic consumption and export [11].

Each person has to work long hours—sometimes more than 14 hours a day, including weekends. If one refuses to do this kind of labor or is unable to fill their quota, the guards will shock them with electric batons, expose them to freezing temperatures, or subject them to other forms of torture.

Along with the 25 documented deaths at Liaoning Women's Prison, most practitioners have suffered long-term and various forms of torture including beatings, sitting on thorny stools, force-feedings, exposure to freezing temperatures, electric shock, sleep deprivation, food or restroom use deprivation, being jabbed with screwdrivers or other pointed objects, being scalded with hot water, hangings, sexual abuse, and/or forced drug injections, among others. [12]

Ms. Yang Chunling (杨春玲) [13] was sentenced to seven years of imprisonment in 2006. Ms. Yang was sentenced for defying the state's media censorship when she tapped into a cable television network and played a video that outlined the bloody history of the communist regime in China and its treatment of Falun Gong.

At Liaoning Women's Prison, she was tortured by inmates, deprived of sleep, food, and water, and not allowed to use the restroom. In this way, she became extremely weak and developed an irregular heartbeat.

When Ms. Yang left the prison on March 11, 2013, she had three hard lumps in her breast. Then, not long after, her condition deteriorated, and she passed away on April 2, 2014.

Ms. Wang Xiuxia (王秀霞) [14] was arrested while distributing informational materials about Falun Gong in 2002. She was sentenced to four years in prison. 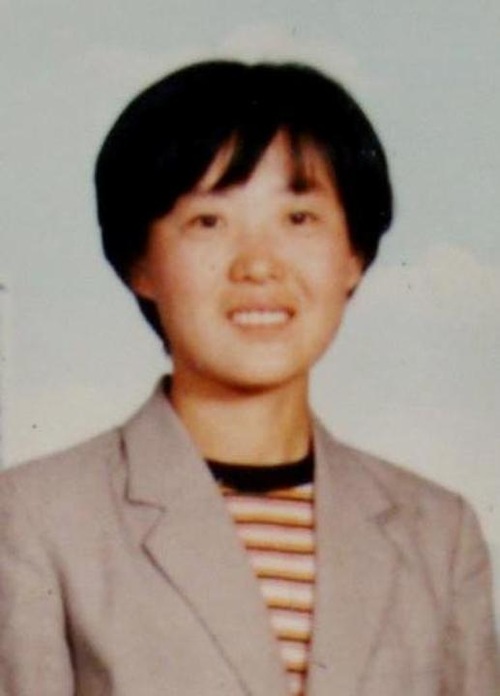 For holding strong to her belief, prison guards prohibited her from talking to anyone, and they forced her to do heavy labor with impossible quotas. When she was unable to finish the assigned work, inmates would beat her, pinch her nipples, and not allow her to sleep.

After working for more than 10 hours one day, the inmates forced her to sleep on the floor and poured cold water on her. Soon her health began to deteriorate rapidly.

When her family went to visit her in July 2005, Ms. Wang was clearly emaciated. Still, two prison guards hovered over her, and she only told her family that she had no appetite.

Her health continued to deteriorate, and the prison released her in December 2005. The release, however, was only an attempt for the prison to shirk responsibility for her impending death.

At that time, Ms. Wang was in critical condition, and she had injuries all over her body. Her chest was covered with wounds, she had lost all her front teeth, and her legs were so swollen that she could not walk.

When her family sent her to the hospital, she was diagnosed with dual tuberculosis and heart failure. She soon passed away at the age of 41, less than a month after her release.

Ms. Liu Pintong (刘品彤) [15] was sentenced to eight years in prison for talking to people about Falun Gong. Upon arriving at the prison on December 11, 2012, she was first taken to the “Correction Center,” where she was forced to stand still and then sit on a thorny “ small stool.” She was not allowed to wash herself or use the restroom—even during her menstrual period. The guards also deprived her of sleep and beat her at random intervals.

When her sister went to see her on October 16, 2014, she was shocked and heartbroken to see Ms. Liu's limbs tied so tightly to the bed. At this point, Ms. Liu was emaciated and too weak to talk. The ropes were so tight that her hands and feet were swollen. 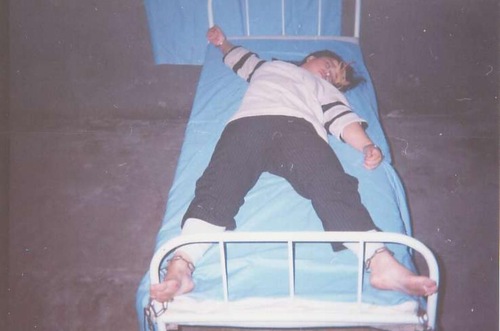 Torture re-enactment: Tied to a bed

Despite her health condition, the guards refused to release her on medical bail since her sister could not pay the large “fees.”

After Ms. Teng Xiuling (滕秀玲) [16] was illegally arrested on June 25, 2013, she was overcome by the police brutality and lost the ability to speak. She was sentenced to three-and-a-half years in prison on September 16, 2013.

The prison forbade her lawyer from visiting her, and it was not until June 19, 2014 when her lawyer finally managed to see her for the first time since her arrest.

According to her family after they visited her, the guards were forcing unknown drugs into her at the prison hospital. Her family described her as “emaciated and with trembling limbs. She had lost the ability to speak and was full of anxiety.”

Ms. Guo Yunlan (郭运兰) [17] was taken to the Masanjia Ward of Liaoning Women's Prison on August 21, 2013, to serve her three-year sentence term. Doctors diagnosed her with high blood pressure and stroke symptoms.

The prison detained her at the Masanjia Prison Hospital, and when her husband visited her, she was unable to walk.

Despite her condition, prison officials refused to release her on bail because she refused to give up her belief in Falun Gong.

The prison also prohibited any visits from her lawyer.

Ms. Wang Hong (王红) [18], 47, suffered various forms of torture during her three-and-a-half years of imprisonment at Liaoning Women's Prison. In order to transform her, the guards shocked her with electric batons, handcuffed her from the back, beat her, and refused her sleep.

A guard once dragged her to the bathroom, tore her clothes off, and drenched her in cold water. The guard then opened the window to freeze her, and she was locked in the freezing bathroom for many hours.

Ms. Wang went on a hunger strike to protest the abuse. The guards then tied her to a bed in the spread-eagle position and force-fed her. They also denied her any restroom use.

Later on, she was locked in solitary confinement. Her family was also not allowed to visit her.