Ms. Yang Chunling Dies as a Result of Torture and Abuse for Tapping into a TV Network to Broadcast Falun Gong Programs

(Minghui.org) Falun Gong stories are heavily censored and manipulated by China's communist regime, and have been since this peaceful meditation practice was banned back in 1999. Ms. Yang Chunling defied this censorship by tapping into a cable television network and playing a video about the regime's infamous history and its persecution of Falun Gong. She recently paid the ultimate price for dispelling the false propaganda -- for her courage in telling people the truth about Falun Gong.

The CCP authorities found her and arrested her soon after the broadcast. The police viciously beat her and broke her right arm during the arrest. She was then sentenced to 7 years in prison. She passed away on April 2, 2014, one year after her release, as she couldn't recover from the torture that she had endured. She was only 40 years old.

Ms. Yang had been detained and sentenced to forced labor for distributing materials about Falun Gong before. She had briefly recounted her experience about her latest imprisonment and her previous sentence of forced labor before her death. 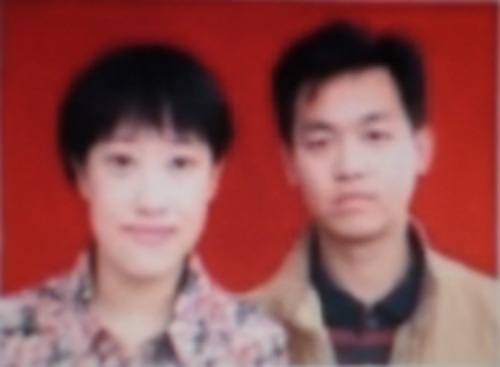 Sentenced to 7 Years in Prison for Broadcasting Falun Gong Program

Ms. Yang and other Falun Gong practitioners tapped into the cable TV network of Liaoyang, Liaoning Province on September 5, 2005, and played a 90-minute video that recounted the Nine Commentaries on the Communist Party, a documentary about the Party's infamous history and its persecution of Falun Gong.

In retaliation, the CCP authorities gave a “kill them all” order, and the local police started a wave of arrests.

Ms. Yang was arrested on October 13, 2005, at her home in Dalian, Liaoning Province. Her fiance Mr. Yang Benliang was also arrested for his involvement in the broadcast. Ms. Yang was held in the Liaoyang Detention Center. She went on a hunger strike to protest the arrest, and was released on medical parole when her health was failing.

Ms. Yang was arrested again in Fushun, Liaoning Province in April 2006 and sentenced to 7 years in prison.

I was sentenced to 7 years in prison in 2006. The police broke my right arm when they arrested me. I went on a hunger strike for 8 months in protest while in detention. The detention center tried to transfer me three times to a prison, but they refused to accept me because of my poor health. The Liaoning Women's Prison, also known as Dabei Prison, finally accepted me after the detention center bribed them.

I was taken to a brainwashing center. The prison guards assigned some inmates, who used to be practitioners but succumbed to the coercion, to read to me slanderous materials against Falun Gong around the clock. But they didn't stand a chance of shaking my faith, as I responded by saying “Falun Gong is good.”

The prison demanded that I work during the 2006 Christmas season. I refused and said loudly “Falun Gong is good.” Inmate Zhao Yan covered my mouth with her hand, pushed me to the ground and broke my right arm again. The prison guard Cong Zhuo, chief of the handicapped prisoners section in charge of brainwashing practitioners, witnessed this but took no action. They took me to a hospital, where the doctors just made a splint for my arm with two wooden boards. The broken bone was still visibly displaced.

Because I refused to do extra work and said “Falun Gong is good” in the workshop, the prison guards ordered inmates to monitor me. I was subjected to sleep deprivation over a period of several days. 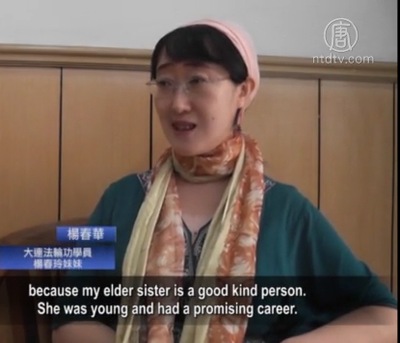 The police cruelly beat my sister and broke her arm while arresting her.

In the prison Cong Zhuo ordered four of the most vicious inmates to beat her. They pushed her to the ground, sat on her, and punched her in her private parts and breasts.

The inmates dragged her back to her cell when she rushed out and shouted, “Falun Gong is good.” They put a plastic bag over her head to suffocate her. Then, they pushed her to the ground, sat on her and beat her for hours. Overnight, a previously healthy and lively girl was crippled.

Still she held no grudge against the inmates and told them about the Falun Gong principles of Truthfulness-Compassion-Forbearance.

An inmate convicted of murder, who used to be extremely cruel and merciless, was changed by her. She said to my sister: “Once I'm released, I will refrain from being violent. I will learn Falun Gong, too.”

The 7-year imprisonment took its toll on my sister's health. She had an irregular heartbeat, and was diagnosed with three hard lumps in her breast. The lumps kept breaking apart, and pus and blood ran out. Despite this, the prison authorities still demanded that she write statements renouncing Falun Gong as a condition for being released.

My sister remained steadfast in her faith in Falun Gong despite the torture.

Passing Away With No One at Her Side

Ms. Yang was released on March 11, 2013, after she was diagnosed with breast cancer. There was no one there for her because her mother had died, and her husband and future mother-in-law were still imprisoned.

After her release, Ms. Yang was not free, as she was closely monitored by local police agents, even when she went shopping. She was afraid that she would be arrested again any time. She felt an enormous amount of pressure from day to day.

Ms. Yang Chunhua said: “She refused to eat anything the first week after she was released. She suspected that someone was feeding her poisonous food. Often she couldn't sleep, and went out in the middle of the night looking very scared.”

She tried to call her 76-year-old father and younger sister on April 1, 2014, on her 40th birthday. She was too feeble to dial the telephone numbers and had to ask one of her friends to do it for her. The friend was worried about her, but she said that she was fine. This friend found her dead on the ground the next day. She died one year after she was released from prison.

Her imprisoned future mother-in-law and fiance are still unaware of her death.

I was sentenced to two years of forced labor in May 2002 and taken to the notorious Masanjia Forced Labor Camp in Shenyang, Liaoning Province. I was told that I had to renounce Falun Gong by the end of 2002. To achieve this they tortured me. I was confined to the restroom and deprived of sleep for many days. I was later taken to brainwashing sessions in other labor camps.

One day a prison guard seized my hair and threw my head against the wall. My forehead had a bump the size of an egg, which kept bleeding for a month. My face was terribly swollen. They barred my family from seeing me. They shouted: “Do you not persist in the truth represented by Falun Gong? This is exactly what you deserve and you shall not regret it.” 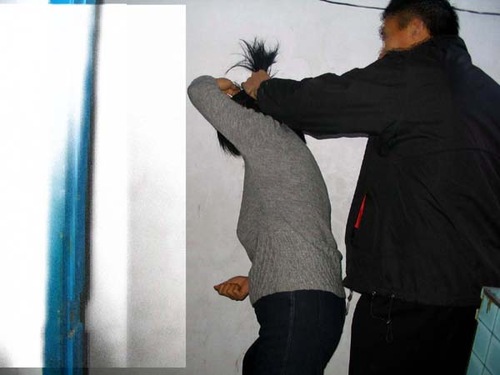 Torture re-enactment: Seizing the hair and hitting the head against the wall

I was transferred to the section where they held steadfast practitioners. They forced me to put my legs on top of each other in the position of the Falun Gong meditation exercise, bound me tight and cuffed my hands to a radiator for 36 hours. When they released me, I couldn't move. Still, they ordered some inmates to beat me. 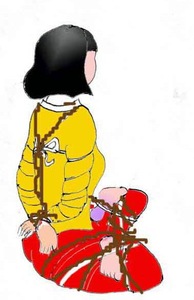 Torture illustration: Bound with legs overlapping each other for a long time

To shake my faith, they took me to a strict discipline center, where they tried to have me renounce Falun Gong. Guard Zhang Lei deprived me of sleep and cuffed me to a radiator for many days. In the mean time she kept slandering Falun Gong. She threatened: ”If you persist on practicing Falun Gong, you will be transferred to Dabei Prison.”

The guards attempted to make practitioners renounce Falun Gong a multitude of ways. Practitioner Ms. Zhang, from Benxi, Liaoning, was choked with a rolled-up bed sheet.

Failing to shake my faith, the labor camp extended my term by 5 months.

Ms. Yang's younger sister was sentenced to forced labor for 2 years at the same time and was given a 4-month extension of her term because she refused to renounce Falun Gong.

Ms. Yang's mother, Ms. Dong Baoxin, had made many attempts to see her daughters when they were held in the labor camp from May 2002 to September 2004, but was unsuccessful. Her health worsened due to the grief and stress, but local officers kept harassing her. She had to sell her home and move to another city.

When Ms. Yang Chunhua was released, police kept asking for her new address. She left home to avoid further harassment.

Ms. Dong was already in grave health condition when Ms. Yang was released from the Masanjia Forced Labor Camp. She even could not recognize her daughter. She died in October 2004.

Ms. Dong had been arrested twice for talking to people about Falun Gong.

She was arrested in December 2000 when she was making materials about Falun Gong with her daughters at her home in Dalian. Her daughters escaped the arrest, but she was taken to Fushun and sentenced to forced labor in the Fushun Labor Camp, where she was cruelly tortured. She was released on medical parole one month later, when she came down with severe food poisoning.

In January 2001 Ms. Dong and her daughters were again arrested. They were confined in an iron cage for 24 hours in the Houjiagou Police Station and later taken to the Drug Rehabilitation Center in the Dalian Law Enforcement Bureau.

Ms. Yang was born in Fushun City, Liaoning Province. She graduated from Liaoning University, and accepted a job in the library of the Dalian University of Technology after she graduated.

Ms. Yang Chunhua said: “My sister and her fiance graduated from a university. My sister used to work as an English interpreter for a trading company in Liaoning Province and her future husband worked as a Chinese language teacher in the Dalian No. 51 middle school. They both cherished Truthfulness-Compassion-Forbearance and soon they became engaged. They registered for marriage in December 2004.

“They broadcasted the Nine Commentaries on the Communist Party nine months after they received their marriage registration, but before they could get married. My future brother-in-law has been held in different prisons in the past few years. He is still not aware of my sister's death.”