(Minghui.org) A radio story I heard the other day about detained Falun Gong practitioners being drugged by Chinese Communist Party agents reminded me of a story I was told a few years ago. The story was so painful to recall that I have avoided retelling it for years.

In 2010, I met a practitioner who once served time in Fanjiatai Prison in Hubei Province for refusing to renounce Falun Gong. From what he told me about the prison, what struck me the most was the use of cages to restrain imprisoned practitioners and to humiliate them. 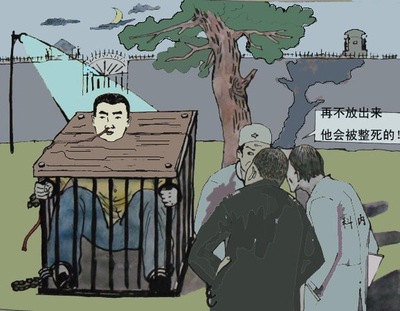 This practitioner specifically talked about what Mr. Guo Chunsheng, a practitioner from Wuxue City, Hubei Province, had endured.

Several months before the Beijing Olympics in 2008, Mr. Guo was arrested and held in the Wuxue Detention Center. In late 2009, he was sentenced to three years in Fanjiatai Prison. From being so abused in prison, he was sluggish and suffered from poor health and a mental disorder.

The prison officials did not arrange for Mr. Guo to receive any medical attention. Instead, they put him in a metal cage, claiming that he needed to be isolated due to his mental disorder.

The prison doctors did not bother to treat Mr. Guo, but they traveled a long way to Mr. Guo’s hometown to take pictures of his family being pressed to say that Mr. Guo became mentally ill because of his practice of Falun Gong. The prison then used the pictures and Mr. Guo's family's statements to spread further lies about Falun Gong.

Mr. Guo was tortured physically and also given unknown drugs. The guards often used the most villainous inmates, who had no medical training whatsoever, to force practitioners to take the drugs. “If you stop practicing Falun Gong, I will separate you from these toughs,” a guard said to practitioners.

One such thug was He Debing (also known as He Hongbing). As he struck a practitioner on the head, he yelled, “You have a hard head, right? Since you refuse to give in, I will destroy you—your body and your brain!” He then enthusiastically described Mr. Guo’s symptoms after he gave him the drugs.

The drugs they administered are controlled substances that damage the central nervous system. People on these drugs become sluggish, have trouble focusing, and turn into robots, following orders without thinking. For example, if you tell someone on these drugs to use the toilet, he would squat down to defecate without pulling down his pants. He would do whatever he was told to do. Memory and the ability to think are affected. Prolonged use or high dosages cause further brain damage.

Other side effects include agitation, anxiety, uncontrolled excitement, or depression, dizziness, blurred vision, slurred speech, lack of coordination, lack of emotion, and even hallucinations or loss of consciousness.

By searching the keywords “nerve-damaging drugs” in Chinese on the internet, many of the results were reports on Minghui.org on the mistreatment of Falun Gong practitioners. In the criminal complaints filed against former CCP leader Jiang Zemin for persecuting Falun Gong, there are many accounts of such psychiatric abuse.

Mr. Guo's ordeal at the prison has been reported before (see related reports below), but I wanted to add yet another testimony to his suffering for his faith in Falun Gong.

Guo Chunsheng Tortured in Prison; His Elderly Mother in a Precarious State

“Dafa Protected My Husband and Me When Our Car Was Totaled”