Dafa Protected My Husband and Me When Our Car Was Totaled

(Minghui.org) I am 39 years old. My husband, my mother, my elder sister, and I practice Falun Dafa. My husband and I were in a major accident in May 2018, but we were not hurt, even though our car was totaled.

My husband and I were on our way home on the evening of May 24, 2018, when we got lost on a country road with no street lights. We were driving slowly, without our seatbelts, and were listening to Master Li's (the founder of Falun Dafa) lectures.

We ended up over 30 meters away, having crashed into a small building by the side of the road and leaving a gaping hole. The car was totaled and we couldn’t open our doors. 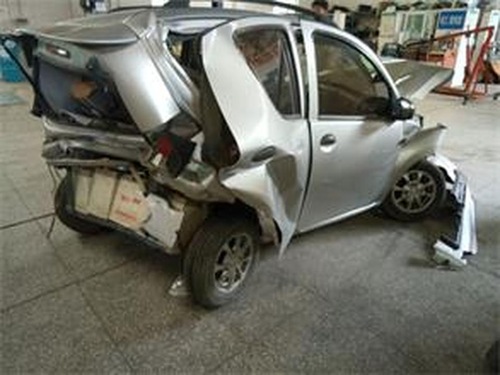 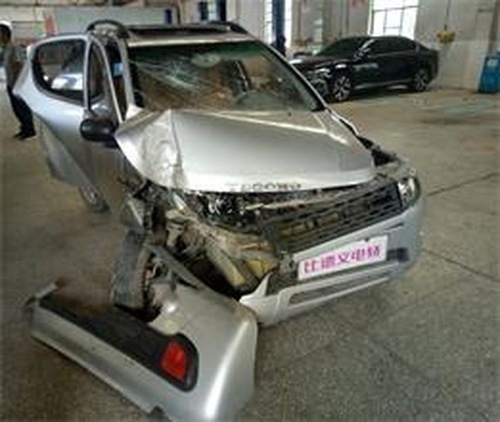 Photos of the car after the accident

The car that rear-ended us was a Ford SUV. The driver walked over to us while talking on his cell phone. He tried to open the car door from the outside while my husband kicked the door from the inside. The door finally opened after several attempts. We could smell alcohol on the driver.

My face had hit the windshield, leaving a big hole, but I wasn’t injured. My face didn’t have any scratches, and it wasn’t red or swollen. Just my left arm hurt; I couldn’t raise or move it. However, I wasn’t afraid as I knew that Master was protecting us. My husband's chest had slammed into the steering wheel, but he didn’t feel any pain and was fine.

The driver was terrified and said, “I’m drunk. Please don’t call the police. How much is your car? I will buy you a new one.”

When the driver's wife and brothers arrived at the scene, the driver sat in his car and fell asleep. His wife saw that our car was completely wrecked and quickly asked if we needed to go to the hospital. We said, “We practice Falun Dafa. Our master, Master Li Hongzhi, protects us. There will be no problem.”

They were still unsure, so they had my husband and me sign an agreement saying they would not be held liable for anything that happened to us from that day on. Both sides signed the agreement and they paid us 20,000 yuan for the car.

We then reported the incident to our insurance company. When they came to get the car, they said, “The car is totaled—completely wrecked. It can’t be repaired.”

Just then, we noticed a fishing pond less than a meter away and realized that the small building was for people to use when they were fishing. Fortunately, no one was inside at the time of the accident.

We were finally able to get home at around midnight. My mother was still waiting up for us. She said she was worried that night and couldn’t fall asleep. When we told her about the accident, she said, “It is such a miracle! Thanks to Master for his protection!”

The next day, my elder sister came to see how I was doing and asked about my arm. I said, “I'm OK. I will be fine in about three days.” When I was doing the Dafa exercises three days later, my left arm was fine and no longer hurt.

Even though our car was totaled, none of the Falun Dafa items in the car were damaged. Our computer under the back seat was fine even though the back seats were gone. The USB flash drive we had in the car to listen to Master's lectures was bent 90 degrees but my husband fixed it. We still use it today.

Thank you, Master, for protecting us!

“From Ancient Times to the Present, Thunder and Lightning Are Indicative of Right and Wrong”