Six Members of Same Family Targeted for Their Belief – Mother Drugged in Custody and Paralyzed, Father Deceased, and Children Incarcerated

(Minghui.org) A once happy family in Yingkou City, Liaoning Province was shattered after the Chinese communist regime began to persecute Falun Gong in July 1999.

Falun Gong, also known as Falun Dafa, is a self-improvement system that consists of meditation and is based on the principles of Truthfulness-Compassion-Forbearance.

The family matriarch, Ms. Wang Aiyun, a retired elementary teacher, once suffered from neurological problems and endured years of dizziness, fatigue, and bad appetite. No medical treatment helped, but her symptoms disappeared after she began to practice Falun Gong in 1995. Her miraculous recovery inspired her husband and children to also take up the practice of Falun Gong. 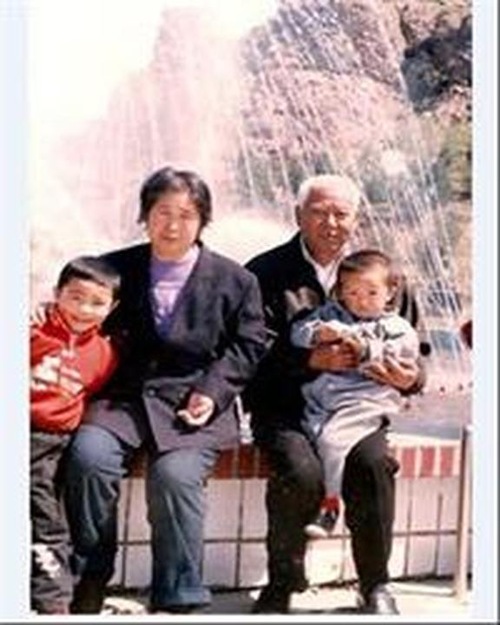 Ms. Wang and her loved ones were repeatedly arrested for refusing to renounce Falun Gong after the persecution began in 1999. She was forced to take unknown drugs during her detention in 2003 and suffered a brain hemorrhage, which resulted in paralysis of one side of her body. She remains bedridden to this day.

Her older son was given two years of forced labor in 2000. Her younger son was also detained multiple times. Her daughter and son-in-law were sentenced to 5 and 7 years in prison following their arrest in 2010.

Ms. Wang's husband, who was also targeted for his faith in Falun Gong, died after suffering years of persecution of himself and his loved ones.

Drugged in Custody and Disabled Since 2003

“Ever since the persecution started, our family life has been miserable — we were harassed by police every day and watched constantly,” recalled Ms. Wang. Police often came to ransack her home. Wu Jiwen and Wang Guo'an were among the officers who often went to harass her.

This led to anxiety and insomnia for Ms. Wang. “Whenever I heard police vans, my heart would pound heavily,” she said. Her husband, too, was stressed and depressed due to the constant harassment. After each home ransacking, he would be hospitalized with heart problems.

The first detention of Ms. Wang occurred in late 1999. Officers from Yikou Police Department and Xiongyue Police Department ransacked her home and took her to Gaizhou Detention Center, where she was kept for 15 days.

After Ms. Wang regained consciousness the second time, she could not help but scream in pain. “There is an order from higher officials that you are not allowed to make noise here,” said one officer, “If you die, we will simply take your body out.”

Ten days later, Bayuquan Police took Ms. Wang, who was still very weak, to Masanjia Labor Camp to serve a one-year term. She was forced to take unknown drugs and within two months, she was in critical condition. She had a cerebral hemorrhage and became paralyzed on one side of the body. She has been unable to take care of herself since then.

Mistreatment of Other Family Members

Besides Ms. Wang, five other members of the family also suffered tremendously for their belief in Falun Gong.

Her older son, Mr. Sun Shicheng, went to Beijing in November 2000 to appeal for Falun Gong. The local Yingkou police took him back and handcuffed him to a bed in such a way that he was unable to stand, sit, or lie down to sleep. His hands were bruised as a result. He was transferred to Gaizhou Police Department the following day and detained for an additional 15 days. One week after his release, Xiongyue police took him to Yingkou Labor Camp to serve a term of two years. On December 7, 2003, he was arrested again and sent to the Yingkou Brainwashing Center.

Mr. Bi Shijun, Ms. Wang's son-in-law, was detained for one month for going to Beijing to appeal for Falun Gong, followed by a three-year labor camp detention. On July 8, 2004, he was sent to Bayuquan Detention Center and held there for 15 days. He was arrested again on September 23, 2009 and sentenced to 7 years in Dalian Prison in 2010.

Mr. Bi's wife, Ms. Sun Li, was arrested together with him on September 23, 2009. Their home was ransacked. She was sentenced to 5 years in prison in July 2010. When she refused to get out of the police van to be taken inside Shenyang Women's Prison, she was brought back to Yingkou Detention Center, where she was hung up as a form of punishment.

Ms. Wang's request to visit her daughter Ms. Sun was denied. Ms. Sun was later sent to the prison, where she faced more torture and abuse. In the freezing winter, she was forced to remove her clothes and stand by the open window barefoot. She developed heart problems as a result and was in critical condition many times.

With both Mr. Bi and Ms. Sun in prison, their elementary school-aged son was left unattended. He had to quit school and went to the countryside to live with his paternal grandmother. 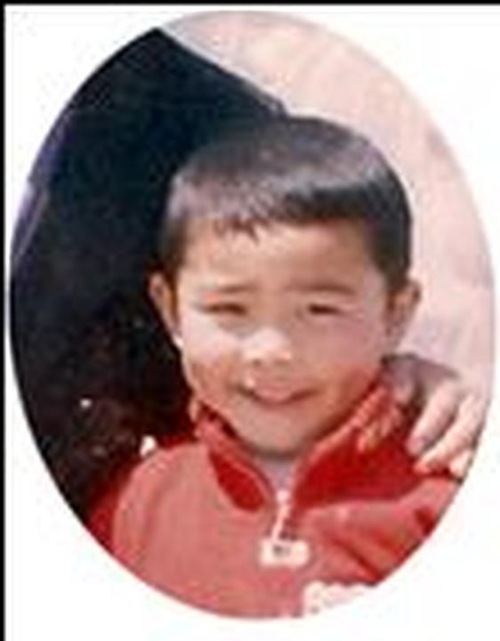 Mr. Bishijun and Ms. Sun Li's son was forced out of school

Less than three months after the arrests of her daughter and son-in-law, police went to Ms. Wang's home to harass her.

Her husband died after experiencing detention and torture himself and worrying about his wife and children. 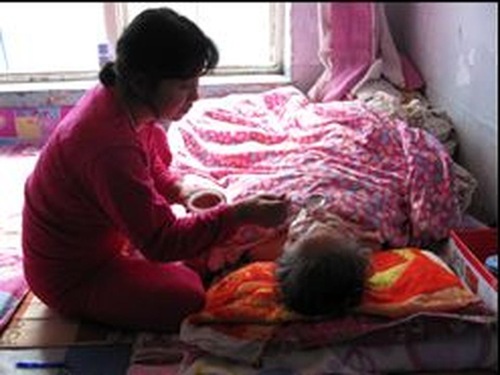 With her husband deceased and children mistreated for their belief, Ms. Wang remains bedridden.

Despite Ms. Wang's half paralysis, she had to walk around with difficulty to try to secure her detained daughter and son-in-law's release. With continued physical and mental stress, she is now unable to walk at all and cannot take care of herself.