Many of these cases did not follow legal procedures. Mr. Gong Peiqi, a retired colonel, was sentenced by the Beiqu District Court in Qingdao City to 7 years of imprisonment with a fine of 20,000 yuan. Officers confiscated more than 120,000 yuan from Mr. Gong, but only about 70,000 yuan were recorded in the verdict. Ms. Zhang Shuxiang, 81, was sentenced to four years of imprisonment without an open trial or her family being notified.

Among these practitioners are highly educated professionals. For example, the Longgang District Court in Shenzhen City sentenced two computer professionals, Dr. Feng Shaoyong and engineer Chen Zeqi, to 8 years of imprisonment each. The Changping District Court in Beijing sentenced Dr. Wang Liangqing, a former researcher at China Academy of Launch Vehicle Technology, to two years of imprisonment with a fine of 2,000 yuan. The Liwan District Court sentenced Wang Jiafang, Associate Professor in mathematics at Guangzhou University, to 3.5 years.

The illegal sentences and trials covered 14 provinces, autonomous regions, and provincial-level cities. Shandong Province tops the list with 12 practitioners sentenced to prison, while the rest of the regions recorded single-digit sentencing cases. 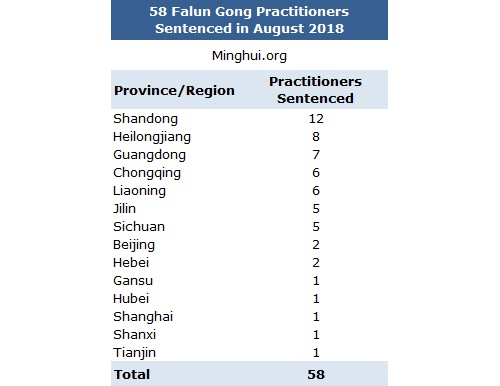 Below are details of several of the cases.

Ms. Yu Guirong lives in Nenjiang County, Heilongjiang Province. She was arrested on April 17, 2018, after being reported to police for distributing Falun Gong informational materials. Her leg was broken in May while she was detained at Qiqihar Second Detention Center; the cause of the injury is unclear.

She was released after her daughter paid a 10,000-yuan bail. Doctors installed a metal plate in Ms. Yu's leg to help her heal. While recuperating at home, she received news in August that she had been sentenced to three years in prison.

With the metal plate still in her leg, Ms. Yu was taken back into custody and taken to prison shortly afterward.

Former Math Professor Sentenced to 3.5 Years for Talking to People about Her Faith

A 54-year-old former college professor from Guangdong was recently sentenced to 3.5 years in prison for talking to people about Falun Gong and the persecution of the practice by the communist regime. The sentencing took place less than two years after she was released from a nine-year prison term, also for refusing to give up her faith.

Ms. Wang Jiafang's latest arrest occurred after a conversation she had with a local resident while walking in a park near her home on September 8, 2017. Because she mentioned Falun Gong in the conversation, she was reported to the park security office. Five officers forcibly threw her out of the park.

After Ms. Wang further contacted officials to explain Falun Gong and the persecution to them, officials reported her to the police, leading to her arrest on October 27, 2017. The police detained her at the Yuexiu District Detention Center. There, a guard kicked her, and she had acute pain in her liver. After several months of detention, her hair had turned gray.

Two weeks after a court sentenced a Falun Gong practitioner to three years with four years' probation, it revoked the sentence and gave the practitioner a one-year prison term.

Ms. Cui's family was informed by the court on July 25 that she was sentenced to three years with four years' probation. She was also required to attend brainwashing sessions twice and do community service once a month.

The authorities did not immediately release Ms. Cui upon the announcement of the sentence. A lawyer and a staff member from the Ji County Justice Bureau visited Ms. Cui at the Rizhao Detention Center in early August. They asked her whether she still practiced Falun Gong. She told them that she still did the exercises to alleviate her headaches.

As a result, a staff member from the Justice Bureau brought the case back to the court and ordered the judge to increase her sentence.

Ms. Cui's in-laws, both 86, have been asking about her after not seeing their daughter-in-law for nearly five months. Her family has not told them about her sentencing, fearing that the news would cause them too much distress.

Two residents of Shenzhen City were recently each sentenced to eight years in prison. Dr. Feng Shaoyong, a telecommunications expert, and Mr. Chen Zeqi, a software engineer, were arrested with two dozen Falun Gong practitioners on September 24, 2016, for distributing information about the persecution of their faith.

Dr. Feng and Mr. Chen were tried on December 1, 2017, by the Longgang Court. Their lawyers argued that the persecution of Falun Gong was illegal, that the computers and other electronic devices confiscated from the two men were their personal or employers' lawful possessions, and that there was no evidence that they had caused any harm.

The Changping District Court in Beijing sentenced Mr. Wang Liangqing on July 10, 2018, to two years of imprisonment with a fine of 2,000 yuan. The local appeals court deceived his family into believing that he could be released if he revealed the source of a piece of prosecution evidence. He and his family complied, only to see his original sentence upheld.

Mr. Wang, a practitioner in his 50s, began to practice Falun Gong in 1995. At the time, he was working at the China Academy of Launch Vehicle Technology, the premier space launch vehicle manufacturer in China.

After the persecution of Falun Gong began, his employer fired him. Mr. Wang later pursued a Ph.D. at Beijing University of Aeronautics and Astronautics. After graduation, he worked for a research institute working on heavy machinery and made breakthroughs in many key national projects.

After the sentence from the Changping District Court on July 10, 2018, Mr. Wang filed an appeal, and his family hired an attorney. The Beijing Intermediate Court told his family members that, as long as Mr. Wang revealed the source of confiscated bank notes with messages about Falun Gong written on them, his case would be reviewed and he could be released.

Under pressure from family members, Mr. Wang told officials where he obtained the bank notes. His family was notified by his attorney on September 4 that the original verdict was sustained.

A retired colonel was recently sentenced by a Chinese court to 7.5 years in prison for not giving up his faith in Falun Gong. His daughter, a San Francisco resident, has appealed to the Chinese communist regime for her father's release.

Mr. Gong Piqi, 63, is a retired colonel and former deputy chief of staff at Shandong Province Reserve Artillery Brigade. He and his wife were seized by police during a group arrest of more than 20 Falun Gong practitioners between October 16 and 17, 2017, in Qingdao, Shandong Province.

The police ransacked his home and confiscated many of his personal belongings related to Falun Gong, as well as 150,000 yuan in cash (roughly $20,000 USD). The Shibei District Court in Qingdao tried Mr. Gong in a makeshift courtroom inside the detention center on May 24, 2018.

Despite his lawyer's defense and his daughter's tireless efforts to free him, the judge handed down the 7.5-year sentence on July 20, 2018, and fined Mr. Gong 20,000 yuan.

“My Son Revealed His Secret Hidden for Many Years”