As a member of the Politburo Standing Committee of the Chinese Communist Party (CCP) and former director of the Party's Propaganda Department, Liu has been deeply involved in the persecution of Falun Gong in China. He has directed the state-run media to slander and incite hatred towards Falun Gong. In his role within the notorious 610 Office, Liu was in charge of developing propaganda against Falun Gong. 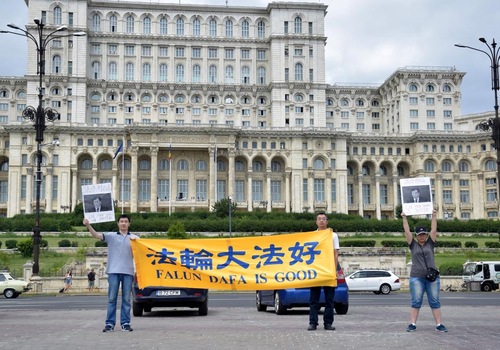 Practitioners also sent an open letter to Romanian Prime Minister Mihai Tudose, in which they reviewed the facts of the persecution and the role that Liu has played in driving the suppression. In the letter, they reminded the Prime Minister to pay attention to these issues in his meetings with Liu.

“Taipei: Over 1,500 Take Part in Candlelight Vigil to Oppose 18 Years of Brutality”