(Minghui.org) Since May 2015, more than 200,000 Falun Gong practitioners and their family members have filed criminal complaints against former head of the Chinese Communist Party Jiang Zemin, who initiated the violent persecution of Falun Gong. A significant number of reports indicate that the Chinese authorities harassed, arrested, and tortured those who filed complaints against Jiang with China's highest court.

In Beijing, Ms. Zhang Shufen was arrested after she submitted her criminal complaint. Officers used a torture method called “chaining up a dog,” in which the victim's hands are cuffed behind her legs such that she cannot stand up or turn over to sleep, and is forced to walk like a dog to use the restroom. 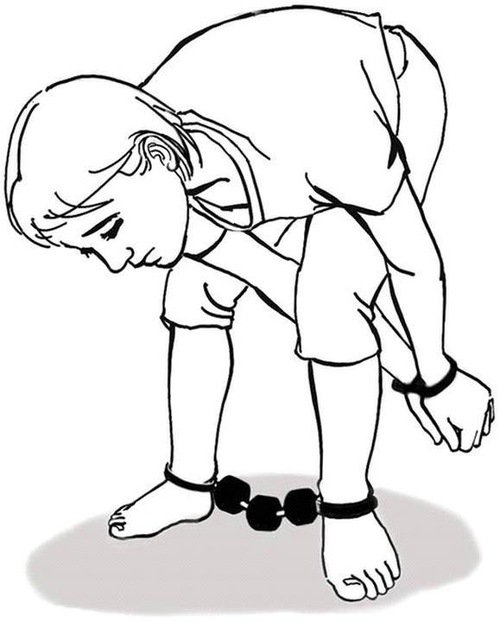 Torture illustration: “Chaining up a dog”

The Nanshan Group in Longkou, Shandong Province used a torture method called "roasting whole lamb” on over 20 of its employees. A victim is handcuffed to a pole and suspended in the air with the ankles tied together. The victim is then swung like a lamb over a roasting pit. Victims are left bedridden for several months after being tortured this way. 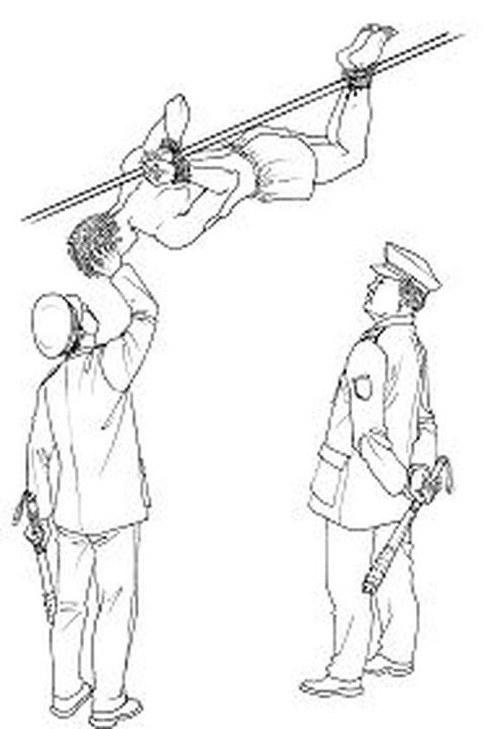 In addition, three practitioners in Heilongjiang Province and one in Shandong Province were arrested and beaten by police after they filed complaints against Jiang Zemin.

Ms. Wang Shufang, Ms. Li Shufang, and Ms. Li Xiulin mailed out their criminal complaints against Jiang Zemin on July 26, 2015. When the women went to the local police department on August 6 after being informed that their mail had been blocked, they were arrested them and taken in for interrogation.

Officers slapped the women's faces and tied them to a “tiger bench,” on which a victim's legs are tied down with belts, and bricks (or other hard objects) are added under the victim's feet until the belts break.

One officer tore up Ms. Wang Shufang's criminal complaint in front of her. A beating left her body covered in bruises and her left ear bleeding. Her husband took her home at around 10 p.m.

An officer struck Ms. Li Xiulin's chest twice, causing her to suffer a heart attack and convulsions. After she recovered, she was not allowed to use the restroom and was forced to relieve herself on the floor. Officers then splashed the urine on her head.

The police ordered her to step on a photo of the founder of Falun Gong, which she firmly refused. One officer boasted, “I got this job because I persecute Falun Gong.”

Li Xiulin was released on the sixth day, after she developed hypertension and heart problems while detained.

Ms. Li Shufang was detained for 15 days after officers forcibly took a blood sample from her.

Ms. Wang Wenjun is in her 60's. She was arrested on June 17, 2015 after she filed a criminal complaint towards Jiang Zemin. Police showed her bloody pictures of human organs and said, “You're too old, so we won't need any of your organs except your corneas.”

The next day, officers ordered Ms. Wang to sign statements admitting guilt, which she refused. Police took her to a brainwashing center for eight days, then back to the police station. There, Ms. Wang was beaten and shocked with electric batons. She has since been held at the Jilin City Detention Center.

Ms. Wang's family hired a human rights lawyer for her. When the lawyer went to the police station, the officer in charge of her case threatened the lawyer at gunpoint. During her trial on November 12, 2015, only three of her family members were allowed to enter the courtroom, while more than 20 police officers observed the proceedings. Ms. Wang was forced to defend herself, as her lawyer failed to appear.

“Over 2,400 in Sichuan Participate in Reporting Jiang Zemin's Crimes”