(Minghui.org) Six officers from Chongwenmen Police Substation in the Dongcheng District of Beijing broke into the home of Falun Gong practitioner Ms. Zhang Shufen on August 31, 2015. They ransacked it and arrested her.

Ms. Zhang’s husband had died just 18 days before--after the police harassed the couple. Ms. Zhang was held for nine hours in the station before being transferred to Dongcheng District Detention Center, where she was detained for a month.

Ms. Zhang recounts the couple's and her ordeals in her own words.

My husband, Mr. Feng Mengzhi, was involved in a car accident 22 years ago when he was only 38 years old. He almost lost his life. Luckily, he was still able to take care of himself afterwards.

I was sent to Beijing Women’s Forced Labor Camp in 2008 for two years because I am a Falun Gong practitioner. My husband was left on his own and had a stroke.

When I returned home in March 2010, he had another stroke and was no longer able to take care of himself. I still took great care of him. He was very supportive of me practicing Falun Gong. He also benefited from it, and his condition improved, too.

When practitioners started filing lawsuits against Jiang Zemin, my husband wanted to participate because he had personally suffered as a result of the persecution when I was arrested and detained. However, before he was able to, he died suddenly.

About five Chongwenmen Police Substation officers knocked on our door around 11:00 a.m. on August 12, 2015. They claimed to be investigating my criminal complaint against Jiang. I refused to open the door.

One of them said, “My name is Wang Peng. We need some information from you and then we'll leave.” I was afraid my husband would be frightened if I let them in. I told them that there was nothing wrong with practicing Falun Gong and suing Jiang, and said I could go to the police station later to talk about it. I refused to open the door, and they finally left.

My husband heard all of what went on and got terribly upset. The next day, he suddenly had difficulty breathing and died that afternoon. He was only 60 years old.

Cutting Off the Electricity to Deceive Me

The electricity went out all of a sudden at 4:00 p.m. on August 31, 2015. It was very strange, because the electric meter was still blinking. When I decided to check on it and opened my door, two police officers were standing right there. They had set it up so that I would open the door and they could arrest me.

One of the officers was Wang Peng. They started ransacking my house and took my Dafa books, phone cards, tape players, etc. They called for four more officers, arrested me, and took me to Chongwenmen Substation at around 5:00 p.m.

The Persecution I Endured

I was taken to the Dongcheng District Detention Center at 1:30 a.m.

They forced me to have a physical exam. I was detained at Dongcheng District Detention Center at around 3:30 a.m. on September 1, 2015.

On September 1, two police officers interrogated me about my filing a lawsuit against Jiang Zemin. I clarified the truth to them.

On September 3, about four guards told the other inmates to make me put on the detention center uniform, because I had initially refused. They tied me up and put it on me. I went on a hunger strike at noon and took off the uniform.

On September 5, I was transferred to the fifth ward. The guards there ordered me to put on the uniform again. I ignored them and continued to do the exercises.

On September 8, guards decided to humiliate me by using a torture method called “chaining up a dog.” They handcuffed my hands behind one of my legs so that I couldn’t stand up. I couldn’t even turn over to sleep. I had to walk like a dog to use the restroom. So I went on a hunger strike to protest. 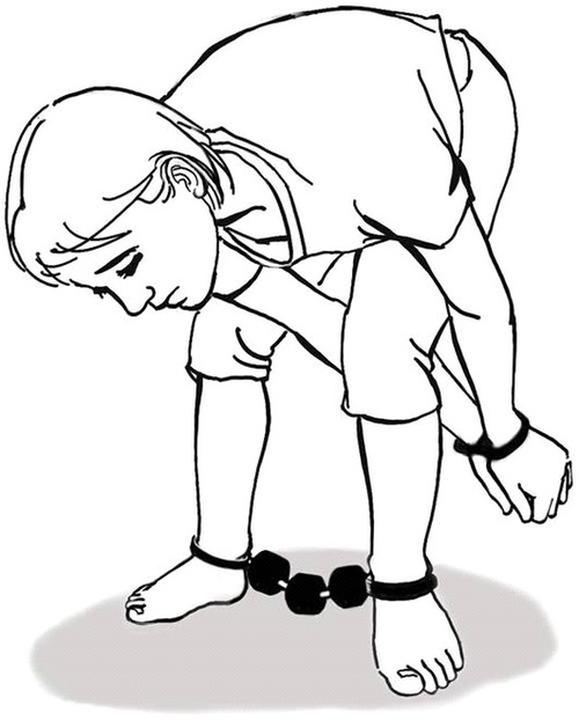 Torture Reenactment: “Chaining up a dog”

Beginning on September 10, the police force-fed me. Two of them handcuffed me and held my legs down. One of them pushed down on my head very hard so that I couldn’t move. They poked a plastic tube into my nostril. It really hurt. 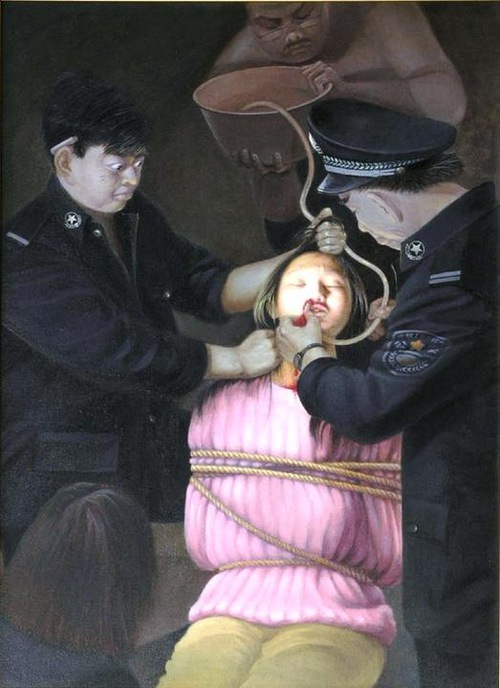 In the morning on September 11, they attempted to force-feed me again, but were unsuccessful. They released my handcuffs and let me eat. The head of the detention center asked me, “Will you practice again when you go home?” I said, “Yes!”

In the afternoon on September 12, a guard told four or five inmates to put the uniform on me. They tried to chain me up like a dog again, and I went on a hunger strike to protest. They attempted to force feed me again, but were unsuccessful. I continued to talk to them about Dafa.

On September 18 and 19, Li Jun, the political instructor, chained me up like a dog again

On September 20, Li Jun and others force-fed me and made me sit on an iron chair. Eight or nine of them participated in the force-feeding. I shouted “Falun Dafa is good” and sang Dafa songs. Li Jun stuffed a towel in my mouth.

On September 30, I returned home.

“We Should Not Get Distracted by Old Forces' Arrangements”

“Spaniard: Falun Gong Helped Me Break Away from Pain”