(Minghui.org) Thousands of lawsuits against Jiang Zemin, former head of the Chinese Communist regime, have been filed by Falun Gong practitioners in China, as well as relatives of practitioners and practitioners that escaped to foreign countries.

For example, 13,109 practitioners filed criminal complaints against Jiang Zemin between June 19 to 25, 2015 for launching the suppression of Falun Gong in 1999.

Mr. Jiang Zhennan from Weihai, Shandong, filed his complaint against Jiang Zemin at the Supreme People's Procuratorate, demanding that the former Chinese dictator be held responsible for crimes against humanity, genocide, and other atrocities. 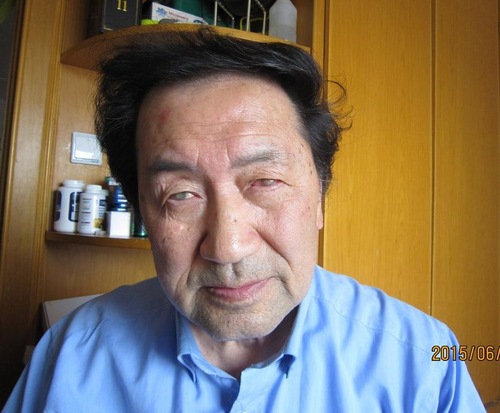 The 76-year-old Mr. Jiang was instrumental in developing the textile industry in Weihai City. He turned around a dying carpet factory in the 1960s and kept expanding it in the next two decades, during which time he won numerous honors and awards for his innovations and high quality products.

Mr. Jiang's grueling work schedule, however, took a toll on his health. He was diagnosed with esophageal cancer and other health problems in 1997 and almost lost his ability to work. As he was at the height of despair, Falun Gong came to his rescue – all his symptoms disappeared shortly after he took up the practice in 1998.

His joy didn't last long. Mr. Jiang was sad to see the persecution of Falun Gong begin one year later, but he was determined to tell people how the Chinese Communist regime is wrong in attacking the practice that had transformed his life. He went to Beijing in 2000 to protest the persecution, only to be arrested and detained for six days.

The police arrested him again for telling people about the persecution in November 2001. He went on a hunger strike one month into his detention and was released five days later.

Mr. Jiang returned home one day in September 2007 to discover that the police had ransacked his home and confiscated many of his family's belongings.

To avoid further persecution of him and his family, Mr. Jiang spent the next eight months living away from home. The unstable living environment and anxiety that came with a destitute life eventually robbed Mr. Jiang of most of his eyesight. He also had trouble taking care of himself.

Mr. Jiang returned home in May 2008. The well-respected local industry giant is now suing Jiang Zemin for the suffering he endured.

Additional information about the persecution of Mr. Jiang:The Chief Engineer of the Textile Enterprise Group in Weihai City Has Disappeared After Intense Monitoring by 610 Office AgentsFormer Deputy General Manager of Weihai Textile Group Missing for a Month