13,109 People File Complaints Against Jiang Zemin in One Week

(Minghui.org) Between June 19-25, 13,109 Falun Gong practitioners and their family members filed criminal complaints against Jiang Zemin, former head of the Chinese Communist Party (CCP). They urged the Supreme People's Procuratorate to initiate an investigation and bring Jiang to justice for ordering the violent suppression of Falun Gong in China that continues to this day.

The complaints charge Jiang with unlawful imprisonment, depriving citizens of their constitutional freedom of belief, and abuse of power, among other crimes. 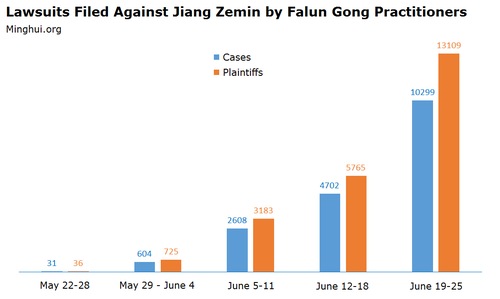 The number of criminal complaints filed against Jiang Zemin has grown quickly over the past five weeks.

Jiang initiated the persecution of Falun Gong on July 20, 1999, and created an extralegal agency (the 610 Office) with power to override police and judicial organs in carrying out his directive. During the past 16 years, more than 3,800 Falun Gong practitioners have been confirmed tortured to death. The actual toll is likely higher, because information about such cases is tightly censored in China.

Some cases were filed from outside of China: 160 Falun Gong practitioners in 17 other countries have also filed complaints against Jiang with the Supreme People's Procuratorate. These practitioners were able to escape persecution in China and are now living in America, Australia, Malaysia, New Zealand, United Kingdom, South Korea, Canada, Thailand, Denmark, the Netherlands, Spain, Japan, Sweden, Norway, Ireland, and France.

• 415 became handicapped or had family members tortured to death• 2,678 had been held in forced labor camps or imprisoned• 67 had been incarcerated in mental hospitals• 5,640 had been detained in detention centers or brainwashing centers• 3,252 suffered economic losses due to extortion, loss of employment, or having their salaries or pensions reduced or suspended• 947 had family members who lost their jobs, were expelled from school, had mental breakdowns, or passed away as a result of the persecution

A Falun Gong practitioner from Jilin City stated in his complaint, “...in dealing with Falun Gong cases, the courts do not follow the law–they follow the Communist Party's persecution policy...This persecution would not exist in any country with rule of law.”

“I am not taking legal action against Jiang Zemin for myself, because my suffering is no different from what millions of Falun Gong practitioners have suffered in this persecution. I am taking this legal action because I want you take a look at the Falun Gong issue calmly and objectively and to take responsibility for yourselves and the Chinese people.”

“Introducing Falun Gong at the Festival of Nations in Austria”