(Minghui.org) The Heilongjiang Province Land Reclamation Bureau Legal Education Center reopened its doors in late October 2015, after being closed for more than one and a half years. Known to locals as a “black jail,” the center was established in 2000 to hold, brainwash, and torture Heilongjiang residents who refused to give up Falun Gong, a spiritual practice being persecuted by the Chinese communist regime.

The authorities shut down the facility in March 2014 after the arrest of eleven supporters of a group of practitioners detained there was made known to the international community, drawing widespread condemnation.

The center, however, was reinstated recently, with Mr. Wu Cunli becoming the first Falun Gong practitioner sent there this year, and the 117th since its opening in 2000.

Mr. Wu, an employee of Jiangchuan Farm, a subsidiary of the Heilongjiang Land Reclamation Bureau, was arrested on October 22, 2015 at the local police station when he went there at the police's request to discuss his practice of Falun Gong. Prior to his arrest, he was repeatedly harassed by officers, who attempted to get him to write guarantee statements to renounce the practice.

His family found out later that he was sent to the black jail on the same day of his arrest. Their request to see him was denied, and they are very concerned about him, especially given that many practitioners detained there in the past were tortured. 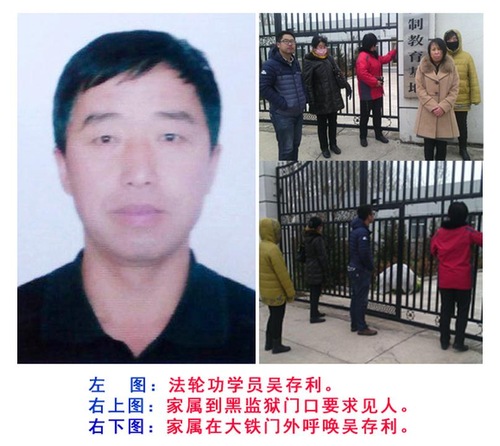 From left (clockwise): photo of Mr. Wu; relatives standing outside the black jail; relatives shouting through the gates for Mr. Wu

On the morning of October 29, 2015, Mr. Wu's wife, son, younger sister, and sister-in-law went to the center with another practitioner, Ms. Jiang Xinbo. Ms. Jiang had been detained at the center and was also one of the last three practitioners to be released before the center temporarily closed in 2014.

A staff member came out and questioned their relationship to Mr. Wu. Though they are Mr. Wu's immediate family members and allowed by rule to visit, the staff refused to let them in. They were also told to throw away the clothes that they had brought for Mr. Wu.

Mr. Wu's relatives told the deputy head why they had come, but he refused to let them visit Mr. Wu. He said that if Ms. Jiang had not come, they would be allowed to visit him. He accused Ms. Jiang of being part of an outlawed organization. He threatened her with arrest, as well.

When the relatives insisted on seeing Mr. Wu, the deputy head showed them a photo he had taken on his phone of Mr. Wu having a meal. Ms. Jiang wanted to have a closer look at the photo, but the deputy head would not allow it. “It's none of your business,” he said.

Mr. Wu's relatives stood in the cold for a long time and eventually left, after being repeatedly denied visitation.

Heilongjiang Province Land Reclamation Bureau Legal Education Center was established in 2000, one year after the communist regime launched the persecution of Falun Gong. The center was housed in Qixing Farm from 2000 to 2009 and relocated to Qinglongshan Farm in 2010.

It closed at the end of March 2014 after seven practitioners and four lawyers were arrested by force on March 21, 2014 from their hotel. The day before, they had gone to the center to visit detained practitioners.

The incident was exposed internationally after three practitioners ended up in critical condition, four lawyers suffered broken bones, and four other practitioners were sentenced illegally.

Word of the incident quickly spread, and many lawyers and citizens rushed to the center to ask that the practitioners be released. There was widespread international condemnation of the authorities' actions and calls for the practitioners' release.

The center is known for heinous acts of torture—depriving people of sleep, burning the face with an open flame, hitting the ribs with a metal bar, forced-feeding, and other crimes.

“Snapshot of Falun Gong Practitioners Whose Copies of Lawsuits Against Jiang Zemin Were Received by Minghui on Nov 4-6, 2015”