(Minghui.org) In about two weeks' time, Mr. Bian Lichao's wife and daughter were both tried for trying to rescue him.

Mr. Bian Lichao, a Falun Gong practitioner from Tangshan, Hebei, was in critical condition after being imprisoned as part of an illegal 12-year sentence. He was denied medical parole and family visitation. Furthermore, this March, his wife and daughter were both arrested in an effort to raise awareness about his case. 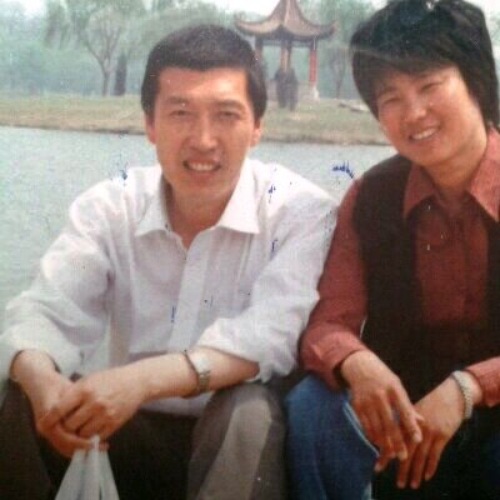 Mr. Bian Lichao and his wife

In protest of the judges' illegal procedures in both cases, the defendants' attorneys withdrew from the trials before they had concluded.

On August 5, 2014, Mr. Bian's wife, Ms. Zhou Xiuzhen, was tried at Tangshan's Lunan District Court. Ms. Zhou was accused of publishing messages about her husband's arrest and sentencing, and about the 120,000 yuan confiscated by police from her home.

The trial took place in a very small room, which only allowed for seven people to attend. Three of the attendees were from the 610 Office, and two were court staff.

The court appointed a panel of three judges for the case. Before the trial started, Ms. Zhou requested that judge Liu Xiangshan be removed from the panel, since he was the presiding judge who sentenced her husband to 12 years.

The judges adjourned the trial for five minutes to discuss the request. When they came back, they denied Ms. Zhou's request. Her attorney argued that it was illegal for judges on the panel to make such decisions, but his argument was shut down by one of the judges.

Ms. Zhou then requested that the panel include independent jurors, but this request was also rejected. Moreover, the judge prohibited Ms. Zhou and her attorney from making any more requests about the makeup of the panel.

Without reading the defendant's rights, the judges proceeded with the trial.

Disappointed at the blatant violation of legal procedure, Ms. Zhou's two attorneys stated that they were prepared to withdraw from the trial; they noted, however, that their decision did not mean that they were conceding their representation of Ms. Zhou in the future. The judge readily approved their withdrawal.

After the attorneys left, the prosecutor read the indictment. Ms. Zhou kept silent as her attorneys asked her not to say anything while they were not there.

The judges adjourned the trial after 20 minutes and claimed that the panel would make a decision on the sentence later.

Upon leaving, Ms. Zhou's attorneys, Wang Quanzhang and Hu Guiyun, went to the Tangshan Intermediate Court to file a complaint about the trial. They also stated on their blog that they will not give up seeking justice for their client.

In a similar fashion, the three attorneys appointed to Ms. Zhou's daughter, Ms. Bian Xiaohui, also withdrew from the trial in protest of the illegal procedures. The trial was held on August 21 by the Qiaodong District Court in Shijiazhuang.

After the attorneys departed, the judges continued the trial for another hour. 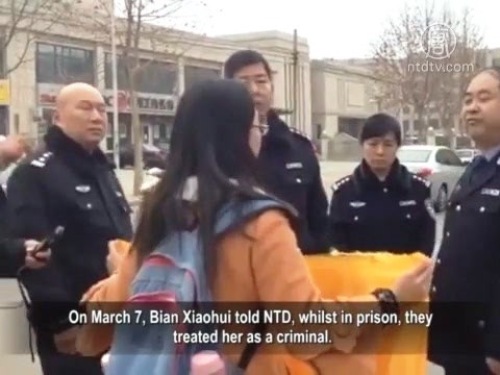 Ms. Bian Xiaohui surrounded by police in front of the prison before she was arrested

Ms. Bian Xiaohui, 23, is a college graduate, and she was arrested for holding a banner in front of the prison that read “I want to see my father.” She was detained at the Shijiazhuang No.2 Detention Center, where she was held in a room with no bed. She was thus forced to sleep on the floor for 26 days, from March 19 to April 14.