Sarasota: "We Have to Be in Touch with Our Soul and Our Spiritual Feelings from Within" (Photo)

(Clearwisdom.net) The Divine Performing Arts Touring Company staged its first show in Sarasota, FL, on December 22, 2008. John Masefield, chairman of the International Irradiation Association, the IIA, and his wife, Grace Masefield, a TV presenter and fashion designer, shared the same impression of the show, that it presented a message of hope. 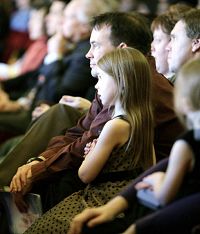 Art Fan: I'd like to know more about Falun Dafa (Photo)

(Clearwisdom.net) Allen Lea is in management in the field of environment and health. He is an avid art fan. In his spare time, he sings, composes songs, writes poems, and creates play scripts. He is particularly interested in and is an admirer of Chinese culture. He attended the second show presented by the Divine Performing Arts International Company in Houston on December 23, 2008. After the show, he said that he would check the Falun Dafa website after returning home to learn more about it.