Art Fan: I'd like to know more about Falun Dafa (Photo)

Allen Lea is in management in the field of environment and health. He is an avid art fan. In his spare time, he sings, composes songs, writes poems, and creates play scripts. He is particularly interested in and is an admirer of Chinese culture. He attended the second show presented by the Divine Performing Arts International Company in Houston on December 23, 2008. After the show, he said that he would check the Falun Dafa website after returning home to learn more about it. 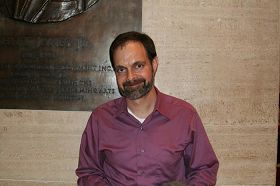 He said in an interview that he found the entire show to be educational. He not only learned about the origin of Chinese culture, its art and dance, but also was curious to find out more about Falun Dafa.

"The show expressed some concepts about the Falun Dafa cultivation group in a pleasing way. I thought it was really good and have a desire to learn more about Falun Dafa itself."

Mr. Allen said that he had heard about this cultivation group before and knows that it is being persecuted in China. Now he wants to go to the Falun Dafa website and find out more about it.

“Renowned Gospel Singer: He Was Singing a Song of God (Photo)”