Practitioners did the exercises near the Chinese Consulate in Zurich, collected signatures on a petition calling for an end to the persecution, and held a rally in the Paradeplatz in the city center on July 22. 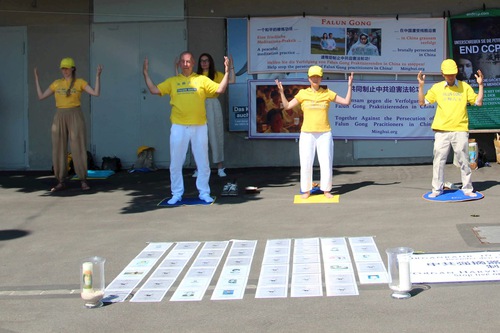 Practitioners perform the Falun Dafa exercises near the Chinese Consulate in Zurich on July 22, 2022 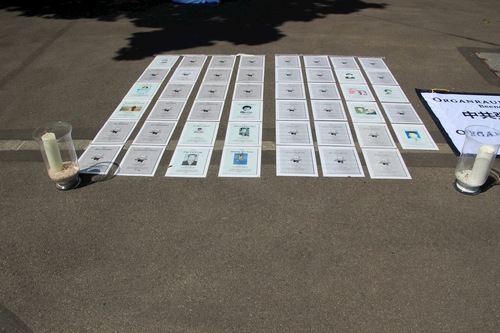 A similar rally was held the following day on Kornhaus square in the center of Bern. Some practitioners went to the Chinese embassy in Switzerland before the gathering and read an open letter, hoping that the embassy staff could distinguish right from wrong and make the right choice for their futures. 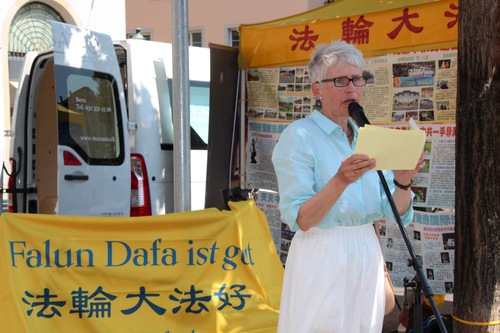 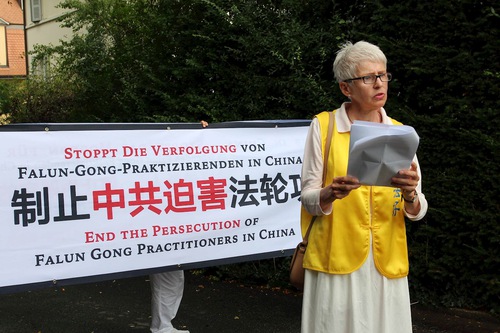 A practitioner reads an open letter to the Chinese Embassy in Bern, wishing staffers will make the right choice 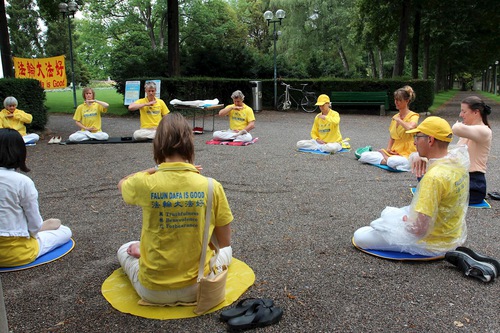 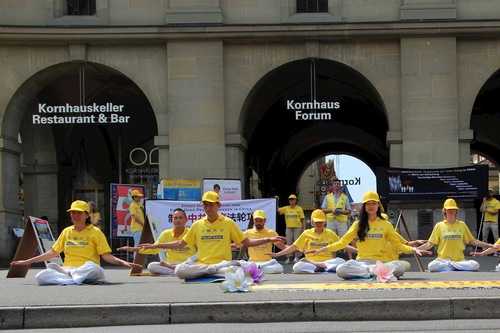 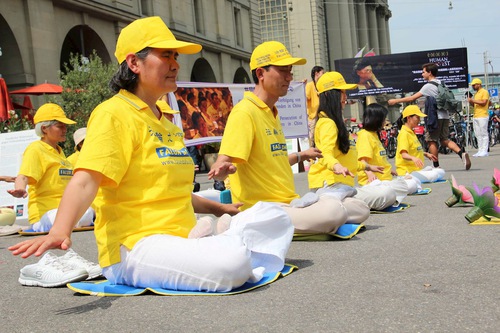 Performing the exercises on Kornhaus square on July 23 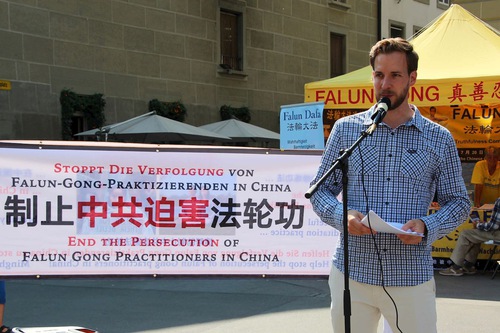 A practitioner speaks during the rally 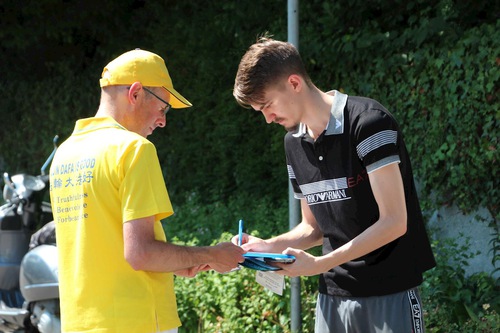 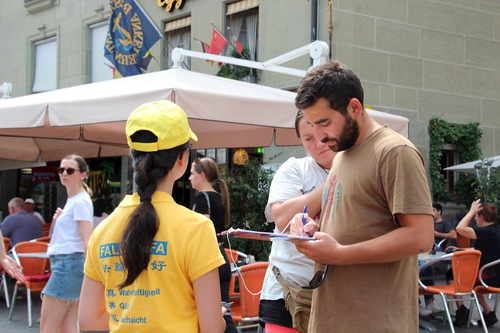 A former member of the Federal Assembly and Canton legislators sent letters to express their support for Falun Gong. 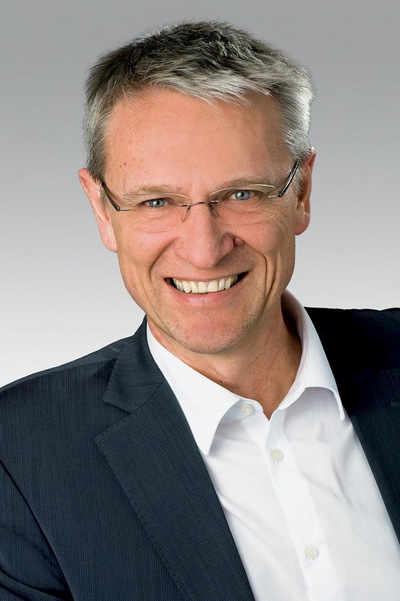 Dr. Bernhard Hauser, legislator of the Canton of St. Gallen

Dr. Bernhard Hauser, legislator of the Canton of St. Gallen, said that China, under the CCP’s rule, is one of the countries with the most human rights abuses in the world. He stated that “clear and broader actions to resist the CCP regime need to be taken because systematic persecution of people in Xinjiang and Falun Gong practitioners and the current threats to Taiwan cannot be tolerated.”

He thanked all those who support Falun Gong and freedom of speech all over the world. 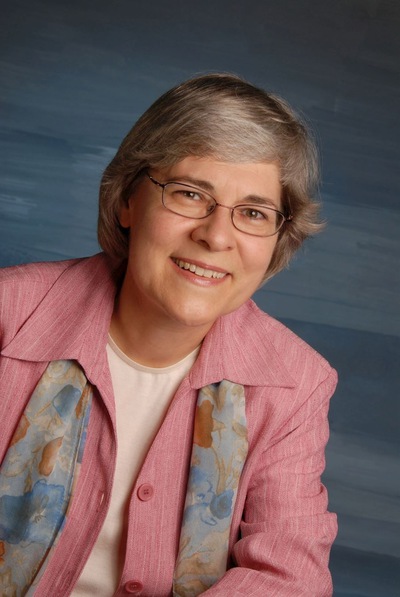 Eva Keller, a former legislator of the Canton of St. Gallen, wrote in her letter, “The human rights violations should be exposed and publicly condemned.”

“The persecution of Falun Gong practitioners by the CCP is still indescribable. This world power (under the rule of the CCP) tramples on human rights and is in contempt of the rule of law.”

“Although Falun Gong is not the only one being persecuted, we must not forget them, because it is rare to see their news in a prominent place in the media. I thank you for your efforts for the sake of human rights and the rule of law, especially for Falun Gong. Only when human rights violations are made public will it be possible to turn around. The worst thing is to forget those being persecuted. Thank you for making this happen.” 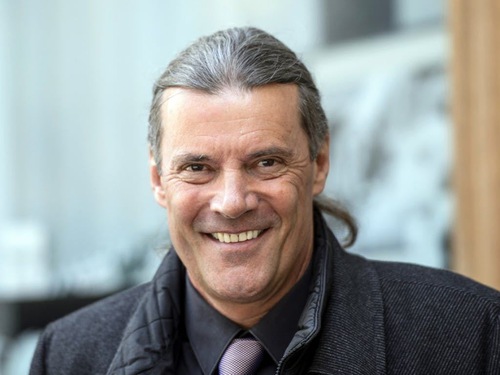 Oskar Freysinger stated in his letter, “You have come together today to protest the brutality of the CCP, to prove that compassion, charity, and human dignity are inviolable to you. I am very grateful and amazed for that. Your actions show your courage and prove that you will not submit to a dictator.”

Roman Glaser, a retired teacher, first heard about Falun Gong in Zurich. He spoke out against the 23 years of persecution by the CCP, “This is a disaster, unimaginable, unreasonable, so bloody and inhuman. Of course, there is no doubt that the persecution should be stopped.”

He said that the CCP was trying to expand its influence around the world, so he hopes practitioners will collect more signatures. “So more people can get more information. It will also let those who do business with the CCP think it over and the consequences.”

Maribel Garcia Gunzaler from Cuba lives in Switzerland and works as a translation consultant. She and her friend, who is a reporter, saw Falun Gong in Zurich, and she was very happy to encourage her friend to interview practitioners, and she helped translate.

She mentioned that she had learned to practice Falun Gong before, and she felt very good: “Practicing brought me peace, and I felt a lot of energy from the very beginning.” Due to limited time, she did not continue. Now she is considering resuming her practice.

Gabriela Alic got a flyer at the Bern rally. She read it quietly, shaking her head, and then listened carefully to a practitioners’ speech. 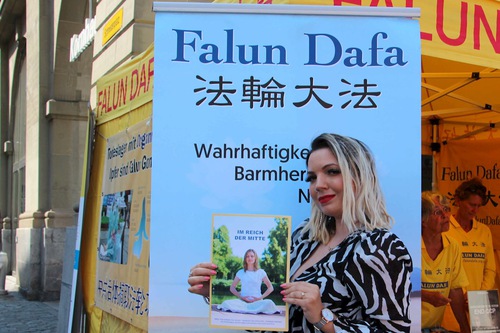 She said, “I think live organ harvesting is very bad. These people [Falun Gong practitioners] are persecuted just because of their beliefs. I think this is very serious.”

She also signed the petition to support Falun Gong practitioners and hoped to draw attention to the persecution. She said, “It is very important for people to understand what happened. This [persecution] has been going on for 23 years. This is a very important message. People should really pay attention to it, not turn a blind eye to it, should listen, act, and voice their concerns. We are human beings and we should support each other.”

Nina Neuenschwander, a nurse, learned about Falun Gong through a pamphlet she received before the Bern rally. Thus she knew about the CCP’s organ harvesting. She said, “More people could think about, discuss this topic, and support stopping this crime” she said. She said any normal person would not agree with the persecution.