(Minghui.org) Falun Dafa practitioners held activities to celebrate the 23rd World Falun Dafa Day at Westlake Park in Seattle on April 30, 2022. They demonstrated the exercises, told people about Falun Dafa and how the CCP (Chinese Communist Party) is persecuting it, and collected signatures on a petition to help end the persecution.

To commemorate the event, Mayor Glenn A. Johnson of the city of Pullman, Washington, issued a proclamation declaring May 13, 2022, Falun Dafa Day in the city.

This year marked the 23rd anniversary of World Falun Dafa Day, which was initiated in May 2000. Practitioners in Seattle took a group photo and expressed their utmost gratitude to the founder, Mr. Li Hongzhi. They put their palms together in heshi, (a gesture of respect), sent their regards to Master, and said in unison, “Falun Dafa practitioners wish revered Master a Happy Birthday! Falun Dafa is good! Truthfulness-Compassion-Forbearance is good!” 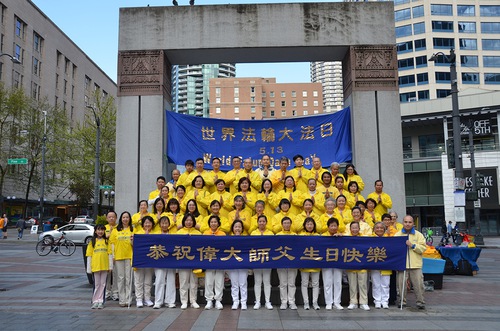 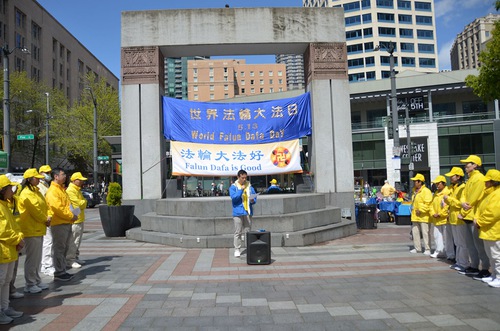 As part of the activities to celebrate World Falun Dafa Day a practitioner introduced the spiritual practice and described how the CCP is persecuting the practice. 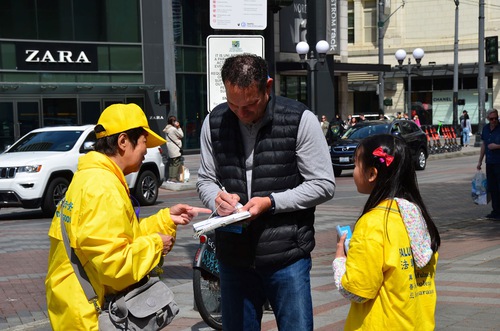 Passersby sign the petition to help end the persecution.

Practitioners also talked about the health and physical benefits they experienced after practicing Falun Dafa and read the proclamation issued by Mayor Glenn A. Johnson in the city of Pullman, Washington. 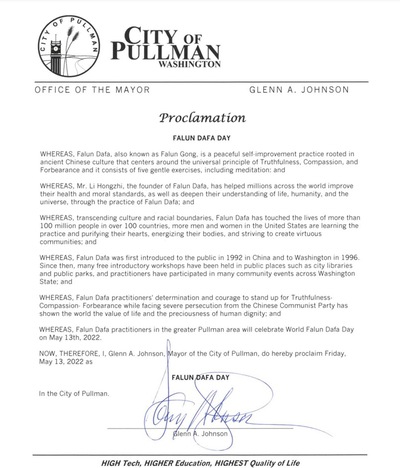 Proclamation issued by Mayor Glenn A. Johnson in the city of Pullman, Washington in 2022

Below is the full text of the proclamation:

WHEREAS, Falun Dafa, also known as Falun Gong, is a peaceful self-improvement practice rooted in ancient Chinese culture that centers around the universal principle of Truthfulness, Compassion, and Forbearance and it consists of five gentle exercises, including meditation: and

WHEREAS, Mr. Li Hongzhi, the founder of Falun Dafa, has helped millions across the world improve their health and moral standards, as well as deepen their understanding of life humanity, and the universe, through the practice of Falun Dafa; and

WHEREAS, transcending culture and racial boundaries, Falun Dafa has touched the lives of more than 100 million people in over 100 countries, more men and women in the United States are learning the practice and purifying their hearts, energizing their bodies, and striving to create virtuous communities; and

WHEREAS, Falun Dafa was first introduced to the public in 1992 in China and to Washington in 1996 since then many free introductory workshops have been held in public places such as city libraries and public parks, and practitioners have participated in many community events across Washington State; end

WHEREAS, Falun Dafa practitioners’ determination and courage to stand up for Truthfulness-Compassion-Forbearance while facing severe persecution from the Chinese Communist Party has shown the world the value of life and the preciousness of human dignity; and

WHEREAS, Falun Dafa practitioners in the greater Pullman area will celebrate World Falun Dafa Day on May 13th, 2022.

NOW, THEREFORE, I, Glenn A. Johnson, Mayor of the City of Pullman, do hereby proclaim Friday, May 13, 2022 as Falun Dafa Day.

Mr. Li Hongzhi, the founder of Falun Dafa, held the first lecture classes in Changchun, China, thirty years ago on May 13, 1992. Invited by the China Qigong Science Research Society, Mr. Li Hongzhi gave 54 lectures between May 13, 1992, and December 31, 1994. In 23 cities across China, these lectures were attended by over 70,000 people. Falun Dafa practitioners proposed May 13th to be “World Falun Dafa Day” in April 2000. In May 2000, the Minghui.org website officially announced that May 13 was designated as World Falun Dafa Day.

“Falun Gong Practitioners Interviewed by a TV Station in Guadeloupe”

“Sentenced to Prison While Still in a Coma, Math Tutor Passes Away”