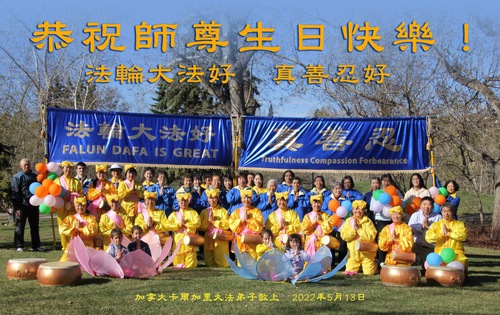 It was a beautiful spring day filled with sunshine. The little practitioners played joyfully with colorful balloons. Members of the waist drum team dressed in bright yellow clothes, headscarves, with pink sashes around their waists played drums in sync accompanied by “Falun Dafa is Good.” The sound of their drums was loud and joyful. As they played they changed their formations from time to time, advancing, retreating, and turning around. Many people stopped to watch their colorful and cheerful performance. 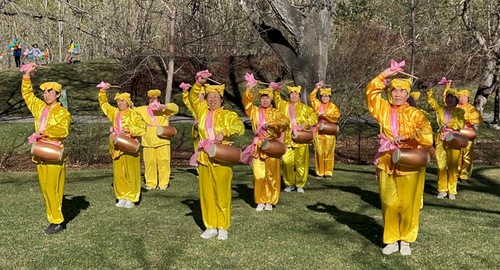 Lisa Xian owns a traditional Chinese medicine clinic in Calgary. She started practicing Falun Dafa in 2016. She says that her view of the world has undergone earth-shaking changes and she feels like a new person. “Suddenly I saw the truth of life, understood the meaning of human life, and understood the real situation of the universe, which completely subverted what I learned from my education and my thoughts of atheism.” Lisa said, “I feel that there is nothing in the world that can be exchanged for this Fa. I now understand the saying, ‘Having heard the Dao in the morning, a person can die at dusk.’ I feel extremely happy. I want to tell everyone how precious Falun Dafa is.”

On this occasion of the 30th anniversary of public introduction, Lisa said, “I am very grateful to Master for passing on such a great Dafa to mankind. Words cannot express my gratitude. I hope more people will feel the beauty of Dafa.”

Robin Chen, an engineer who works for a renowned Canadian telecommunications company, was introduced to Falun Dafa by one of his relatives and began practicing at the end of 1997. He has been guided by the principles of Truthfulness-Compassion-Forbearance since then and was admired by his boss and colleagues at work. In a year-end appraisal, the boss evaluated the employees through reimbursement, job performance, overtime working hours, honesty, etc. “My boss said that you did better than me,” Robin said, “I replied that it is just how I am after I practiced Dafa.”

Robin later went abroad to work in Saudi Arabia. His boss, a Portuguese, repeatedly praised him for his excellent work performance. When his boss needed to recruit new people, he asked Robin, “Can you find another Falun Dafa practitioner?”

Robin’s health also improved tremendously. He previously suffered from epilepsy, which occurred once a month for about a decade. He sometimes lost consciousness and collapsed to the ground. He went to doctors for medical treatments and also tried folk prescriptions. But nothing helped. He did several CT examinations in Beijing. The doctor said that his condition could not be cured. It could only be controlled for a bit by drugs. Out of frustration, he gave up the medical treatment. “After I practiced Falun Dafa for six months, I completely recovered from epilepsy.” Robin said, “More than 20 years have passed. I have never had another attack.”

Middle School Students: Playing No Computer Games and No Cheating on Exams

Li Xueli, 11, was born and raised in Canada. Like other kids in Canada, she is proficient in English. But she also proficiently speaks, reads, and writes Chinese. “When my mother was pregnant, she read Zhuan Falun to me every day,” Xueli said. She began to read Zhuan Falun herself when she was 6.

What changes have practicing Falun Dafa brought to this little practitioner? “My classmates often quarrel or fight because somebody provoked or touched someone,” Xueli said, “After I began practicing, I understood how I should behave. I know that fighting with others will cost me virtue, so I don't fight with others.”

It seems natural for children to play computer games. But Xueli is able to discipline herself. “My classmates like to play games and games encourage players to steal money and fight. I don’t play such games or discuss such topics with them because if I grow up playing such games, I will probably become such a person when I grow up, which I don’t want.”

During one exam, the teacher left the room. The other students immediately took out their mobile phones to find the answers and exchanged answers with each other. “I thought it was cheating and bad behavior. I begged Master to block my ears so that I wouldn’t hear what they were saying. Sure enough, their words turned into a buzzing sound, and I couldn't hear them clearly. I calmly finished the exam.” When the results came out Xueli had one of the highest scores.

Xueli said that she was moved while participating in the activities to celebrate the 30th anniversary of Falun Dafa’s public introduction. She said that every year she participates in the event and it encourages her to practice diligently. Participating in the event helped her to advance in her cultivation. “For example, when I go home today, I will look at my phone less, read the Fa more, and do more exercises.”

“Virginia: Indian Community Moved by Details of the Persecution During Event to Introduce Falun Dafa”