Home > News & Events > Parades & Other Community Events
Virginia: Indian Community Moved by Details of the Persecution During Event to Introduce Falun Dafa
May 11, 2022 | By a Falun Dafa practitioner in Virginia

(Minghui.org) On Saturday afternoon, April 16, 2022, an Indian community organization invited practitioners to give a presentation about Falun Dafa at the Dolley Madison Library in McLean, Virginia.

More than twelve Falun Dafa practitioners from Washington, D.C. demonstrated the exercises, and some gave personal accounts of the persecution they suffered in China, which moved the audience. Professor Sen Nieh, former head of the Department of Mechanics at the Catholic University of America, and Professor Gudipati of the India-China Friendship Committee in Washington, D.C. attended the event as special guests. 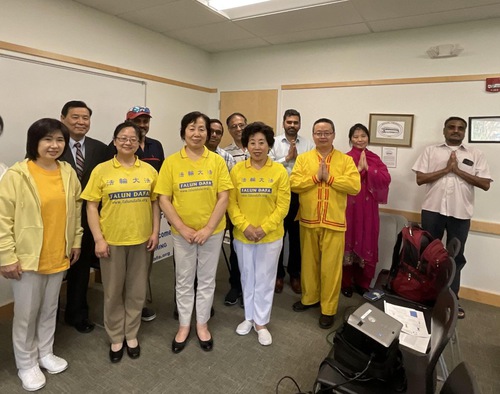 Falun Dafa practitioners and representatives of the Indian community

Several practitioners who were imprisoned in China demonstrated the torture they suffered in prison for not renouncing their faith. Among them, Ms. Chunying Wang said that she was handcuffed and chained up, and was sometimes kept in one position for up to 16 hours. She was also forced to do labor for long hours and was deprived of sleep, and being beaten was a norm.

Another practitioner, Ms. Chunmei Ma, said she was subjected to electric shocks and force fed medication. She was forced to do heavy slave labor in a room full of toxic air. One time her lips became glued together for 14 hours, making it difficult to breathe.

The audience was deep in thought as they listened. Many expressed their shock that this terrible persecution was happening in today’s Chinese society.

Professor Gudipati said that after listening to Professor Nieh’s presentation, he was very interested in learning Falun Dafa. He also said he planned to invite Falun Dafa practitioners to speak about the persecution at a major event in India this July.

He pointed out that in India, where people were once suppressed, it was the persistence of justice in the non-violent non-cooperation movement that awakened the masses in India, thus ending British colonial rule. He believes that although there is a painful price to pay for standing up for justice, the victory ultimately belongs to the righteous.

He said he was not previously aware that millions of people around the world practice Falun Dafa.

After learning that practitioners conduct themselves following the principles of Truthfulness-Compassion-Forbearance, but have been severely persecuted by the CCP (Chinese Communist Party) for over two decades, he felt that more people should be made aware of the persecution that is taking place in China. He said that the CCP’s persecution of Falun Dafa practitioners is against human morality, and that everyone should have the freedom to practice their belief.