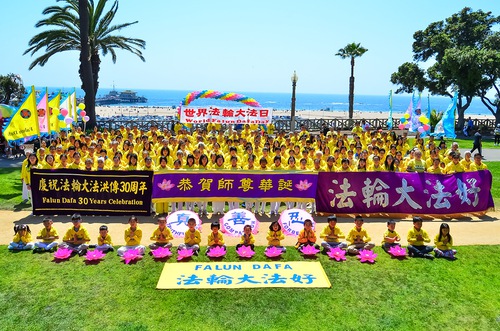 Los Angeles practitioners gather at Santa Monica beach on May 1, 2022, to wish Master Li Hongzhi, the founder of Falun Dafa, a happy birthday. 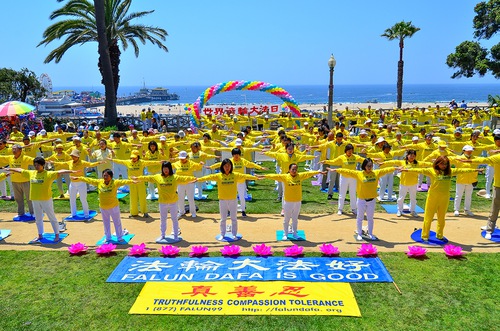 Falun Dafa practitioners demonstrate the exercises at Santa Monica beach on May 1, 2022. 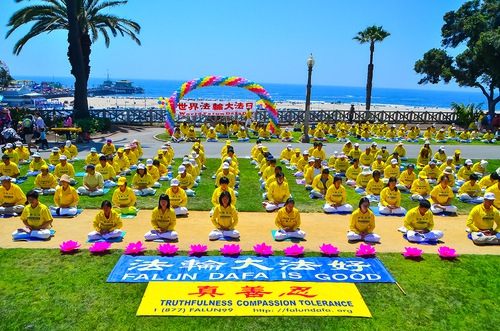 Falun Dafa, also called Falun Gong, was introduced to the public by Master Li Hongzhi on May 13, 1992. It is now practiced in more than 100 countries worldwide. Falun Dafa’s main book, Zhuan Falun, has been translated into more than 40 languages. 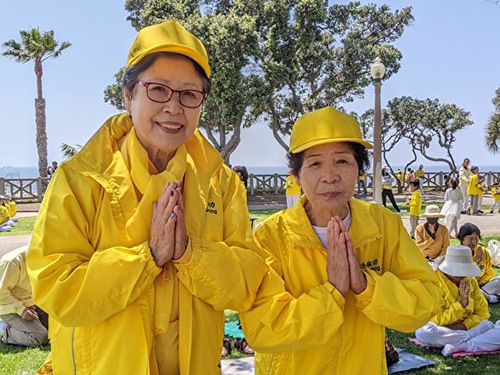 Korean practitioners Chun Kim and Pbot Ryun Kim are both 83 years old. They are in good health, happy, and have almost nothing ailing them. Chun Kim has been practicing Falun Dafa for 16 years. She thanked Master Li Hongzhi for spreading Falun Dafa and changing her life: “Falun Gong has made me physically and mentally healthy and I’ve become a better person. Thank you, Master!”

College Teacher: Proud to be a Falun Dafa practitioner 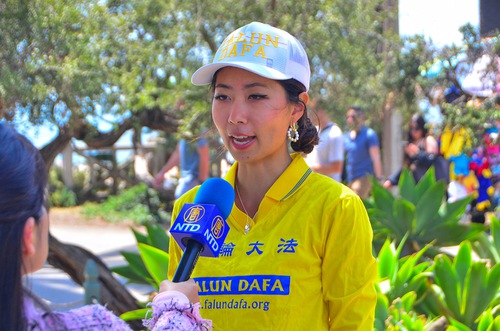 Falun Gong practitioner Renae Wang teaches at the Laguna College of Art and Design. She was born in Beijing and started to practice Falun Gong with her mother when she was a child. After the Chinese Communist Party (CCP) started to persecute Falun Gong in 1999, Renae and her mother were separated for a long time.

Renae was afraid she would be bullied, so when she was still in mainland China she never told her friends that her mother was a Falun Gong practitioner. She knew that her mother was a good person, but she was confused by the reports in the state-run media and the political classes she had to take at school. “I saw that my mother became healthier, but I also saw a lot of fake news. I was very confused at the time,” she recalled.

At the age of 14, Renae came to the United States for a summer vacation. The mother-daughter pair watched Shen Yun Performing Arts. Renae was deeply moved by Shen Yun and felt that the world was full of beauty. After settling in the United States the following year, Renae came to know many Falun Gong practitioners and found that Falun Gong is completely different from the CCP’s official media propaganda. Practitioners do not pursue worldly happiness, rather they seek a higher realm above personal pursuits that can bring real happiness and joy.

“I can now proudly say that I am a Falun Gong practitioner,” she said. Renae follows the principles of Truthfulness-Compassion-Forbearance, and this has given her a clear and definite direction in this complex world. She hopes that more young people will have the opportunity to learn about Falun Dafa and gain inspiration from it.