(Minghui.org) May 13 is World Falun Dafa Day and the 30th anniversary of Falun Dafa’s introduction to the world. Falun Dafa is practiced in over 100 countries, by more than 100 million people. Mayor Nadine Woodward of the City of Spokane proclaimed May 13, 2022, as Falun Dafa Day. 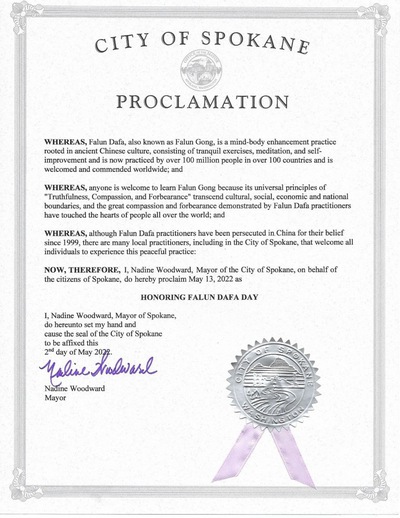 Proclamation from Mayor Nadine Woodward of the City of Spokane

The proclamation states, “Falun Dafa, also known as Falun Gong, is a mind-body enhancement practice rooted in ancient Chinese culture, consisting of tranquil exercises, meditation, and self-improvement and is now practiced by over 100 million people in over 100 countries and is welcomed and commended worldwide.”

“Anyone is welcome to learn Falun Gong because its universal principles of Truthfulness, Compassion, and Forbearance transcend cultural, social, economic, and national boundaries, and the great compassion and forbearance demonstrated by Falun Dafa practitioners have touched the hearts of people all over the world.”