(Minghui.org) Falun Dafa practitioners were invited to participate in the Health and Holistic Exhibition in Eslöv, Sweden, on March 6. With the lifting of the pandemic restrictions, visitors flocked to the venue and many of them stopped by the Falun Dafa booth to learn about the peaceful practice. 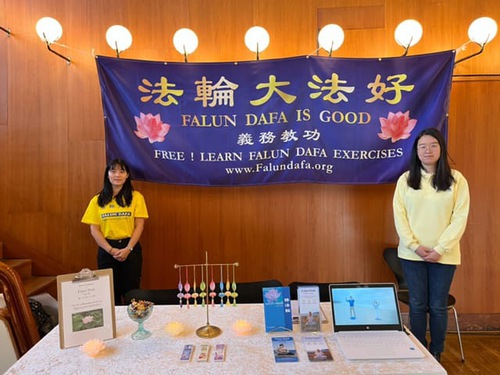 Falun Dafa practitioners participate in the Health and Holistic Exhibition.

The peaceful exercise music and soothing movements attracted many people who wanted to learn more. An endless stream of visitors learned about the principles of Truthfulness-Compassion-Forbearance and watched practitioners demonstrate the five exercises. Many asked where they could learn the practice, and some remarked on how young and healthy the practitioners looked.

People were shocked when they were told about the ongoing persecution in China and the Chinese Communist Party’s state-sanctioned organ harvesting targeting Falun Dafa practitioners. Many signed the petition to end the persecution.

People accepted the origami lotus flowers with a bookmark that read, “Falun Dafa is good. Truthfulness-Compassion-Forbearance is good.” Many said the message was full of hope for humankind.

In the afternoon, practitioners gave an introduction to the exercises and a free class on how to do them. Many people attended. After doing the exercises, some people said they felt strong energy and they were grateful for the opportunity to learn the Falun Dafa exercises.

The organizers of the exhibition thanked the practitioners after the event, saying that the practitioners were very generous in teaching the exercises at no cost and presenting origami lotus flowers to whoever stopped by their booth.

“Reported in March 2022: 74 Falun Gong Practitioners Sentenced for Their Faith”