(Minghui.org) Falun Dafa practitioners in Quebec, Canada gathered in front of the Chinese Consulate and Zhongshan Park in Chinatown on April 24 and 25, 2022, to commemorate the 23rd anniversary of the April 25 Peaceful Appeal. They told people about Falun Dafa and how the Chinese Communist Party (CCP) has persecuted the spiritual practice for 23 years.

Many people expressed their support for practitioners. Some Chinese people quit the CCP and its affiliated organizations after they learned the facts about Falun Dafa and the persecution. 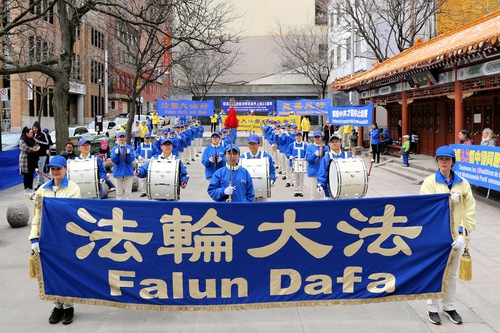 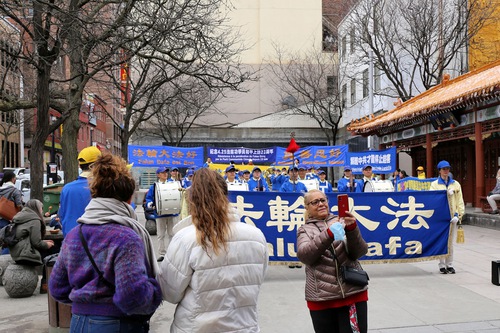 The Tian Guo Marching Band performed during the event on April 25, 2022 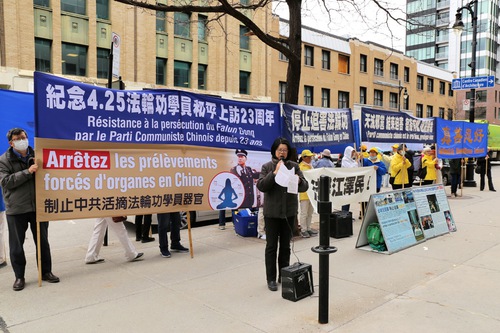 Practitioners held a rally in front of the Chinese Consulate in Montreal to call for an end to the persecution on April 25, 2022. 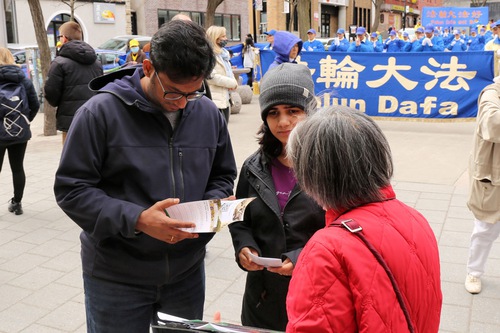 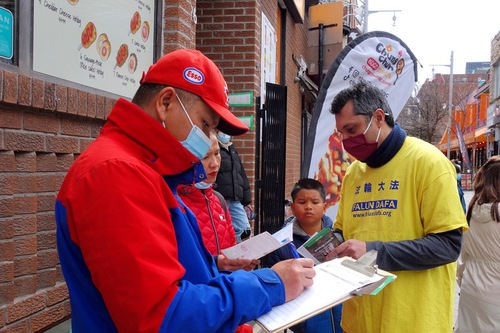 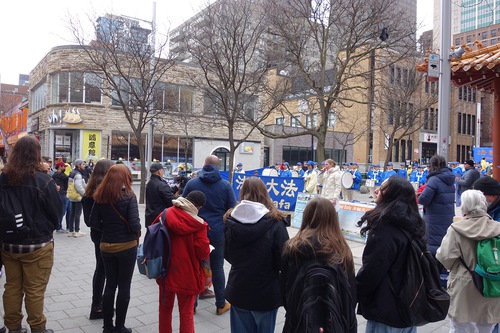 Practitioners talk to people about Falun Dafa and the persecution.

During the rally on April 24, Ms. Yang, a practitioner who now lives in Montreal, said, “On April 25, 1999, more than 10,000 Falun Dafa practitioners went to appeal and ask that they be allowed to practice. Practitioners demonstrated their peaceful and rational spirituality based on the principles of Truthfulness-Compassion-Forbearance. Their courage won the respect of the world.”

She said that the contrast between good and evil is stark during the twenty-three-year-long persecution from July 1999 to the present. Practitioners persist in clarifying the truth to people and exposing the persecution. They hope more people can see through the CCP’s destructive nature and stay away from it.

“Falun Dafa practitioners are righteous, and I respect them,” said Mr. Liu, a Chinese truck driver at the April 24 rally.

Mr. Liu said that most Chinese people were brainwashed by the CCP’s state-owned propaganda. When he first traveled to Hong Kong from China and saw a parade held by Falun Dafa practitioners, he had negative thoughts about them. He said he believed the CCP’s lies and didn’t want to listen to the facts about the persecution.

In 2010, he immigrated to the U.S. and had access to more information. He gradually learned the true history of the CCP and the truth behind many events, such as the 1989 student protest, the Cultural Revolution, and other facts that were falsified by the CCP, including the April 25 Appeal in 1999. He then awakened to the destructive nature of the CCP.

Practitioners explained to him why people should quit the CCP and its affiliated organizations. He quit the CCP’s Young Pioneers with his real name. Before he left, he thanked the practitioners and said, “I am happy to erase my affiliation with the Communist Party.” 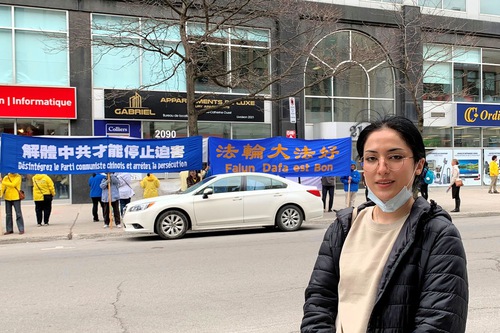 “Live organ harvesting is not something that human beings do. The difference between humans and animals is that humans have morals. They have humanity, and they have feelings. It’s just horrible.” Riman, a journalism student at Dawson College in Montreal, was extremely shocked to learn of the CCP’s organ harvesting from Falun Dafa practitioners while they are alive.

“The Chinese Communist Party’s persecution of Falun Dafa practitioners and the live organ harvesting is so disgusting. It is hard to believe that such things still happen in modern society. It is absurd that the communist regime cannot tolerate people having the freedom of faith. I can’t believe how people who forcibly harvest other people’s organs can still face their families.”

Riman’s eyes welled up with tears as she spoke, “When I saw them, I thought of my mother, who also has her faith. I wouldn’t want anyone to hurt her because of her faith. So I can imagine the pain that the practitioners’ families are going through. It’s the same as what the Jews suffered during World War II.”

She said that humanity should not allow the evil of live organ harvesting to exist. She wanted to spread videos and photos of Falun Dafa practitioners’ activities on social media to raise more awareness.

Leon from the Philippines stopped and watched the rally on April 24. He said, “I support Falun Dafa. They are rational and peaceful. They bring spiritual values, peace, ancient teachings, and a positive impact on the community.”

He said that what practitioners do is out of their conscience, “They do the right thing and let more people know about the bad things the CCP does. I know that the CCP is infiltrating globally. They harass Falun Dafa practitioners everywhere, and spend money on social media to spread their propaganda. The Communist Party is inhumane and doesn’t care about life. People should see its true nature.”

Mr. and Mrs. Tay (Trinh) from Vietnam said, “They [Falun Dafa practitioners] are very courageous, and we support them.”

Mr. Tay said he had read a lot about Falun Dafa, “I know the Communist Party has done very bad things to this spiritual group, for example, live organ harvesting from the practitioners. I have seen some videos of this, and it is terrible. The Communist Party is inhumane.”

“Denmark: Commemorating a Historic Appeal in Beijing 23 Years Ago”