(Minghui.org) Falun Dafa practitioners from Denmark and Sweden gathered at Gammel Torv in Copenhagen, Denmark, on April 23, 2022, to commemorate a peaceful appeal held in Beijing on April 25, 1999.

In April 1999, an article appeared in a Tianjin city newspaper defaming Falun Dafa. The article was authored by a senior Chinese Communist Party (CCP) official. On April 25th, 10,000-20,000 Falun Dafa practitioners gathered peacefully outside the government’s central appeals office, and were directed by security forces to assemble immediately outside the Zhongnanhai central government compound.

Several Falun Dafa adherents met with then-Premier Zhu Rongji and other top leaders to request that the harassment and restrictions on publishing Falun Dafa teachings end and that the Tianjin practitioners be released. At dusk, Tianjin released all of the detained Falun Dafa practitioners in accordance with instructions from the central government.

Then-Party leader Jiang Zemin responded to the demonstration very differently. He was reportedly angered that Falun Dafa practitioners had staged such a large demonstration outside the government compound, was disturbed by the size and independence of the practice, and viewed its moral philosophy as being incompatible with the Party’s atheism. Three months later he launched a nationwide persecution against Falun Dafa, in July 1999.

In Copenhagen, to honor the historic appeal, practitioners practiced Falun Dafa’s five exercises and held other activities to let people know about the ongoing persecution of the practice in China. Many learned about Falun Dafa's beauty and wonders and condemned the CCP for its crimes. 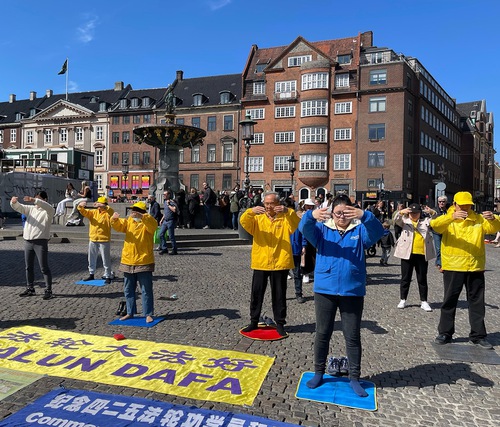 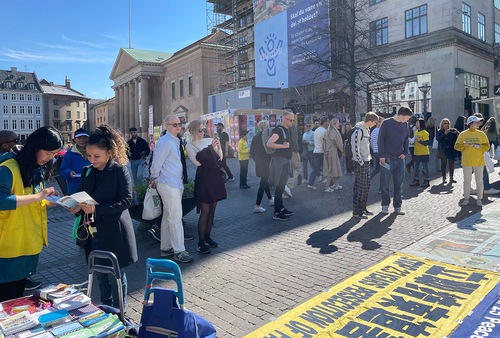 Many passersby were drawn to the practitioners’ booth. 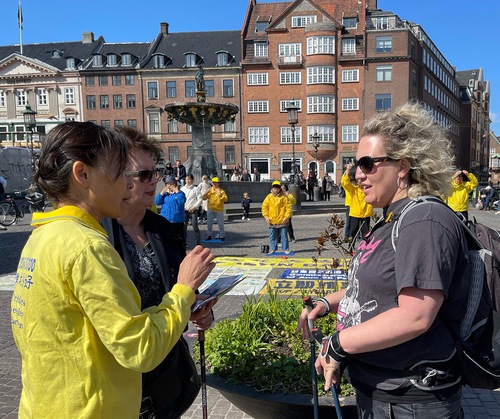 A practitioner talks to people about the persecution.

Dannia is a masseuse who came across Falun Dafa practitioners during their event and says she felt a strong energy field around practitioners. She said Falun Dafa is good because it teaches people to abide by the principles of Truthfulness-Compassion-Forbearance.

She was very happy and said, “Thank you! I have learned a lot about Falun Dafa today. I would like to learn more about it another time.” 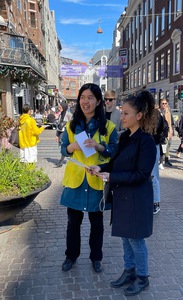 “This is the best gift for my mother!”

The girl was happy and wanted to introduce Falun Dafa to her mother. She said, “I’ve encountered Falun Dafa in the past but don’t have too much knowledge about the practice. Upon seeing the exercise demonstration, I feel that this practice is very good and peaceful. I would like to bring some informational flyers back home for my mother.”

Before the young girl left she said, “This is the best gift for my mother!”

“I want to learn to practice Falun Dafa” 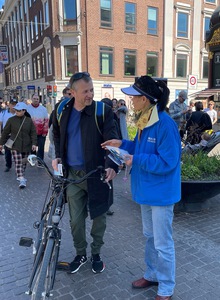 A passerby was intrigued by the gathering of Falun Dafa practitioners.

A man on his bicycle stood among the crowd for a long time watching Falun Dafa practitioners. He says he felt a peaceful atmosphere and wanted to learn more about the practice, saying that he has been looking for a way to become healthier.

A practitioner told him stories about how people recovered from terminal illnesses after taking up the practice. The man said, “This is really good. I would like to try and practice Falun Dafa.”

The practitioner also told the man about how Falun Dafa practitioners in China are killed for their organs. The man said, “I know that the CCP has always been lying. However, this brutal persecution has gone beyond my imagination.”

“What can we do to stop the persecution?”

An Italian couple passed by and was in disbelief upon learning about forced organ harvesting and the ongoing persecution.

They asked, “What can we do to help stop the persecution?” A practitioner replied, “You can spread the truth about Falun Dafa to your friends and family. If you work in a school, you can also spread it to your students and other faculty members. You can also tell them not to get an organ transplant in China.”

The couple said that many people were already aware of forced organ harvesting, however, many have chosen to remain silent. The couple said people should take action to stop the persecution. 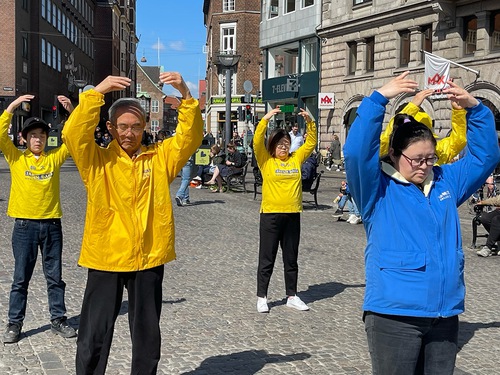 Mr. Chen recounted the historic appeal that he was a part of 23 years ago, “I was there in Beijing with my family on April 25, 1999. We believed in the government back then and were hoping that they were able to understand the truth about Falun Dafa.”