(Minghui.org) Falun Dafa practitioners from Fukuoka and its neighboring cities and counties held activities in front of the Chinese Consulate in Fukuoka on April 25, 2022. They commemorated the 23rd anniversary of the April 25 Appeal and called for an end to the persecution of Falun Dafa by the Chinese Communist Party (CCP) which has persisted for 23 years. 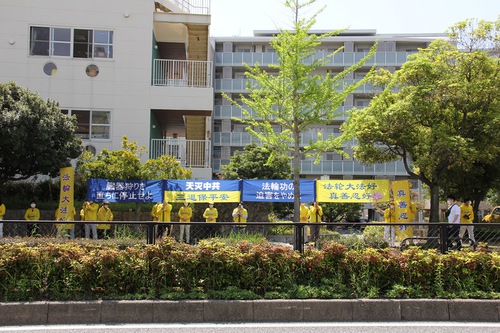 Practitioners held an event in front of the Chinese Consulate on April 25, 2022, to commemorate the 23rd anniversary of the April 25 Appeal in China.

Practitioners unfolded banners with messages such as, “Stop the Evil Act of Live Organ Harvesting Immediately,” “Stop the Persecution of Falun Dafa,” “Falun Dafa is Good, Truthfulness-Compassion-Forbearance is Good.” They also demonstrated the Falun Dafa exercises. The scene was peaceful, solemn, and quiet.

Clarifying the Truth in Front of the Chinese Consulate 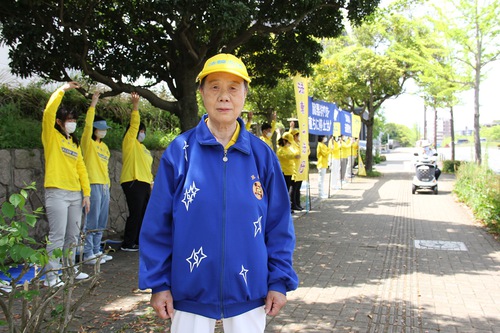 Ms. Wang Xuemei, 81, has clarified the truth in front of the Chinese Consulate every day for the past 15 years

Ms. Wang Xuemei, who is 81 years old, started practicing Falun Dafa in China in 1996. After moving to Fukuoka in 2002, she distributed truth-clarifying materials. In 2007, she started to clarify the truth in front of the Chinese Consulate. At that time, her house was especially far from the consulate but she transported the display boards, banners, and other materials, to and fro every day.

One day she thought, “It would be good if I could live near the Chinese Consulate!” She soon got a house near it. Now, it only takes 3 minutes for her to travel there from her house. Ms. Wang has persisted in clarifying the truth in front of the Chinese Consulate every day. When she meets people from China she distributes The Nine Commentaries on the Communist Party and offers to help them quit the CCP and its youth organizations. When she meets Japanese people, she offers them materials in Japanese. No matter the weather Ms. Wang has not stopped.

Ms. Wang said, “Our truth-clarification and efforts calling for an end to the persecution will definitely not stop until the persecution stops. The world’s people have already changed greatly. In the hot summer, passersby offer us drinks. During stormy weather, the policemen at the consulate tell us to take care of our health.”

Reaching Out to Chinese at Tourist Attractions 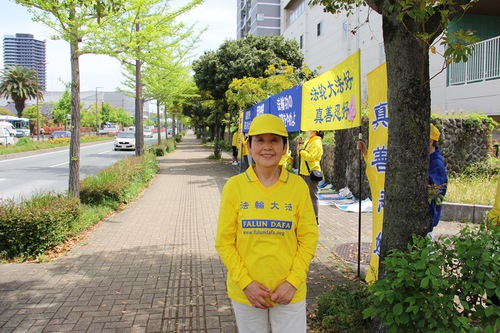 Ms. Naka Teruko, 76, has clarified the truth every day for 19 years.

Ms. Naka Teruko, 76, started practicing Falun Dafa in 2003. When she learned about the brutal persecution in China, not only did she mail a large number of truth-clarifying materials to China, but she also exposed the CCP’s criminal acts of harvesting practitioners’ organs while they are alive to the Japanese citizens and mainstream society, including the members of parliament.

Although Ms. Naka Teruko does not know Chinese, she held boards with explanations in Chinese at tourist attractions to persuade people to quit the CCP. Every day, she leaves the house early and returns at night. There are no rest days. Whenever people ask her what she does with her time, she clarifies the truth to them.

Ms. Naka Teruko later moved in with her daughter’s family. Initially, her daughter was worried that her mother joined a religion, or was being duped of her money, etc.

However, Ms. Naka Teruko told her, “Just observe me for a year and you will understand that Falun Dafa is good.” That was 10 years ago and her daughter noticed that despite her age, Ms. Naka is very energetic. Her daughter now understands the truth and is very supportive of her mother practicing Falun Dafa.

Not Afraid of Hardship 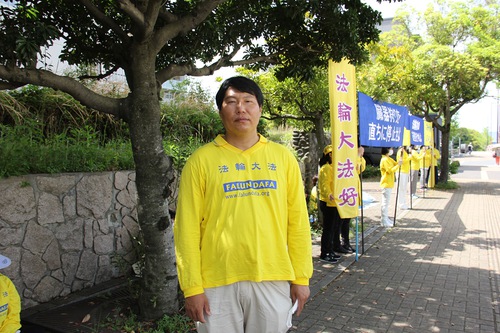 Mr. Zhou Yue has overcome difficulties to persist in clarifying the truth in front of the Chinese Consulate for the past 14 years.

Mr. Zhou Yue who is now 40, learned about Falun Dafa when he was 15 years old. Although he was young he was especially interested in practicing. He later attended college in Japan. For the past 14 years, he has been persisting in clarifying the truth in front of the Chinese Consulate even though it means that he has less time to sleep.

He said, “So many practitioners are still persecuted in China and there are still so many people in the world who are being deceived by the CCP’s lies. I cannot just care about myself. I must think for others too. This is what motivates me to persist.”